Alexa vs the Angelus: the vanishing sights and sounds of an Irish kitchen

From doilies to Super Sers, eight things that have all but disappeared from the heart of the house 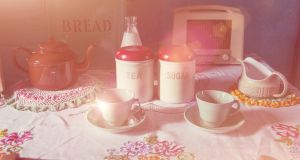 I think its arguable that no room has experienced a greater change over the decades than the kitchen. Photograph: Sean Gladwell/Getty Images

I recently found myself standing in my kitchen listening to the entirety of the Angelus as I awaited the six o’clock news. That is not something that I often do so but I was surprised by how many childhood memories were triggered by this intrinsically Irish sound.

The smell of sausages sizzling beneath the grill of the white free-standing oven; the cold smoothness of the enamel-topped kitchen table; chicken liver pate spinning around the Magimix; the honk and pssssst of the soda stream as it sparkled the thick sugary cola syrup we all loved to guzzle.

When my mother was a child in the 1940s and 1950s, the kitchen was a practical hub with the mixed aromas of smoky turf, tea leaves, beeswax and a vat of jam bubbling on the stove. By the 1960s, the perfume of detergents was dominant, along with shiny lino floors, bright custom-made kitchen units and maybe a record player that kept scratching your favourite records. In the 1970s, the soundtrack began to fizzle as electric can openers and “white goods” crept in, alongside the cassette player that kept chewing up your most beloved tapes.

By the 1990s, most kitchens in Ireland had a pinging microwave (and a skipping CD) while the aroma was increasingly Mediterranean, pasta, pizza and pesto. Entering in the 21st century, we began to bring in bar stools and kitchen islands as our kitchens became cool cafes. And now, landing into 2020, we hear Alexa’s steady voice belting out weather reports, homework spellings, kombucha recipes and a soundtrack chosen by whichever member of the family gets the request in first.

I think its arguable that no room has experienced a greater change over the decades than the kitchen. They have evolved into Dermot Bannonesque spaces – bright, glassy, streamlined and svelte. And yet, at the same time, we have often unknowingly said farewell to many items that defined the Irish kitchen in the age of our parents and grandparents. Here are some of these endangered species:

The long cord on the kitchen wall telephone

There were many times when either myself or one of my sisters would scamper excitedly into the kitchen only to narrowly avoid strangulation on the telephone cord that was now stretched halfway across the kitchen, like a booby trap, while our mother chatted away to a dear friend and stirred the casserole.

Even with a single bar running on the Calor gas heater, the Superser was a saviour to many an Irish home. With its slick little wheels and the merry yellow gas cylinder, the Superser was a common presence in the corner of every kitchen. It also doubled as a cigarette lighter or for toasting marshmallows when it was too wet outside for a campfire. There was nothing like the promise of the “click, click, click” sound of lighting the bars to bring a sense of immediate warmth to a room.

Online news has been detrimental to the beloved newspaper pile, which has for many long decades provided the central ingredient for drying out soaking wet shoes. And what about mopping up dog pee? Or lining the base of the guinea pigs cage? Or rubbing Brasso and Silvo off the candle sticks? Or the papier-mâché stash for the children? It is worth remembering the multiple uses of the beloved newspaper when we opt to read our gossip and current affairs online.

Often passed down through the generations, the Sacred Heart, with its softly glowing red bulb and cross, was as much of a presence in the traditional Irish home as a cup of tea and a thick slice of heavily buttered bread. Even for families who weren’t overly religious, there always seems to be one there, alongside images of the pope, the Blessed Virgin and JFK.

Designed as a cheaper but respectable alternative to the crochet linen doilies often found in aristocratic homes from as early as the 17th century, these were once the indispensable symbol of upward social mobility. In their golden age, the doily graced plates laden with fruit cake and Jammy Dodgers. Be it a gathering of the Mothers’ Union or a one-to-one tea with the visiting clergy, it would have been unthinkable to have got through the occasion without a decent supply of doilies.

Without being aware of it, recycling was already ingrained in daily lives when “leaving out the empties” was the norm. The arrival of the tetra pack and fridges in the 1950s allowed milk to be kept longer, resulting in fewer daily deliveries and God only knows how much plastic waste on a daily basis. On the plus side, people no longer had to worry about tiny birds tapping their beaks through the lids to sup on the creamy froth at the top of each bottle.

An invaluable weapon for chasing siblings around the kitchen table, this clever 1970s gadget was the kitchen hero long before the days of electric standing mixers.

This hypnotic 1970s gadget could easily double up as a playschool toy or exercise tool, with its spinning handle and reverberations. A brilliant design, you simply poured water over your lettuce leaves, popped them in the spinner and gave the handle a whirl. The rotating force created by the spin would magically get rid of the water. Literally. It was nowhere to be seen.