Properties on Brighton Road and Torquay Road sold for between €1.16m and €2.5m 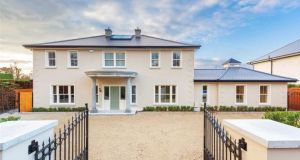 Glenbeigh, on Torquay Road in Foxrock, was sold for €2.5 million on December 18th

Most people’s spending is confined to the buying of presents in the weeks leading up to Christmas, but it has traditionally also proven to be a relatively busy time for househunters to sign on the dotted line and pick up the keys to their new homes.

That certainly appears to have been the case this year in Foxrock, in south Dublin, where three substantial houses changed hands for prices of between €1.16 million and €2.5 million over the course of one week, according to the Residential Property Price Register.

Although the sales’ completion indicates the strength of the upper end of the residential-property market – notwithstanding the pattern of Brexit-related uncertainty – it’s worth noting that just one of the houses achieved its asking price. Taken together, the three properties secured a total of €5.66 million – or 89.85 per cent of their combined asking prices of €6.3 million.

The veteran developer Bernie Carroll secured €1.16 million on December 11th for his home at the Tresilian estate, off Brighton Road in Foxrock, having offered it for sale in October last year for €1.35 million.

Carroll, who established his reputation as a high-quality house builder as far back as the 1970s, with the development of Watson Nurseries in nearby Killiney, built 11 Tresilian in the early 1980s after acquiring the private corner site it occupies from the Foxrock scheme’s developer.

The Co Clare-born businessman came through the crash having managed to hold on to zoned lands in Skerries and Malahide, in north Co Dublin, and Bettystown, in Co Meath, and is back building and selling homes aimed mainly at first-time buyers.

With Carroll’s own children grown and gone from the family home, he and his wife, Deirdre, decided to downsize from the sprawling 293sq m (3,150sq ft) five-bed to a new property closer to the city. The price paid for 11 Tresilian represents a discount of 14 per cent on its guide price when it was brought to the market by its joint agents, Savills and REA Grimes.

The buyers of Laragh, meanwhile, secured an 18.4 per cent discount on the €2.45 million the Torquay Road mansion had been seeking when it was first offered for sale, through Sherry FitzGerald, in March this year. After dropping the price to €2.25 million in June, the vendor let the 382sq m (4,110sq ft) property go for €2 million on December 18th, according to the property-price register.

The house, which dates from the 1930s, underwent a thorough overhaul in 2011, overseen by the architect Graham Petrie, of PAC Studio, in conjunction with the interior designer Mary Ryan. The work transformed the property into a substantial and modern family home, which today incorporates a large glass-and-bleached-timber pavilion-type structure to the rear, three reception rooms, a cinema room and a private guest wing.

Elsewhere on Torquay Road, a premium price of €2.5 million was sought in December 2018, and secured 12 months later, on December 18th, for Glenbeigh, a 363sq m (3,907sq ft) new-build property with four bedrooms and three bathrooms.

Developed by LPN Construction, a firm owned by the Co Clare-based builder Liam Nolan, the property occupies a site that the developer David Daly had earmarked for his new home before the crash.

The price commanded by Glenbeigh reflects its proximity to Foxrock village and its standard of exterior and interior design, level of fit-out, and attention to detail. Its features include polished granite columns supporting a granite canopy over its entrance porch, plus a main entrance hall with a sweeping cantilevered concrete staircase and an inlaid granite floor.

Food & Drink Quiz: Black Forest gateau is made with which fruit?
8