Santa, meet the new homes with no chimney

The fireplace, where Santa makes his grand entrance, is no longer a feature of houses and apartments. New traditions are taking hold 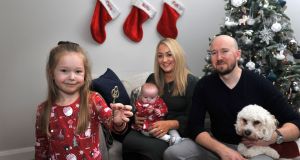 The fireplace, once a central character on the Christmas stage, where Santa has made his grand entrance for over a century, has been relegated to a bit part in new home building and is often written out of the story altogether.

New build, A-rated homes are fireplace-free, for an open fireplace will draw you down the alphabet of BER ratings. With more and more renovated homes opting for no chimney at all, or a sealed stove, how does Santa get down the chimney in 2019 to give kids their presents?

Phil Burke and his fiancee, Linda Ryan, hold the key on how to ring the changes in such an integral part of the festive story.

They bought a brand new house in Miller’s Glen in Swords last year. Most of the second-hand stock they had looked at was in need modernisation and with a small child they wanted something that was ready to move into, he says. “In the homes we had rented we always had a fireplace but spent a lot of our time worrying about keeping Cara, our eldest, now age five, from the grate and from the hard marble corners of one mantle. It became a nuisance. We had to get those foam corner protectors to babyproof it and she would rip them off. We lived in constant fear that she might bang her head.”

Burke grew up with the warm glow of an open fire. There were Christmas cards and birthday cars on the mantle and the family dog lying in front of it, enjoying most of its heat.

Linda did wonder if they’d miss the warmth of a fire but she says the house is ambiently warm all the time. “I don’t miss it at all.”

But as parents to two daughters they had to figure out the whole chimney thing for Cara’s first Christmas in their new house when she started asking awkward questions.

They did this by referencing the film The Santa Clause, where a radiator magically turns into a fireplace, but really turned the corner with the discovery of The Magic Key, a book by Stephanie Stansbie with illustrations by Emi Ordas and published by Tiger Press.

The book is sold with a large Gothic-looking key and the parents explained to their kids that only Santa can use it and only Santa can open the front door to let himself in to leave the presents. Last Christmas Eve in this Lucan household it was hung outside the front door. On Christmas morning, a trail of icing sugar footprints traced his footsteps into the house where he deposited a slew of gifts.

This is their youngest daughter Fíadh’s first Christmas and on December 1st she was introduced to the concept. “The key arrived with a selection box for each of the girls. It is stored in their dollhouse or with the Elf on the Shelf until Christmas Eve,” he explains.

In a home that is minus a mantelpiece where do they hang the stockings? The family uses the end wall of the living room as a place to affix command hooks, those adhesive-backed devices that don’t mark the wall, onto which they hang their stockings, one for each of the girls and one for their pet dog, a cavachon called Molly.

The lack of a fireplace means they have so much more space in their sitting room. Phil loves the fact that the house has a flat wall, with no alcoves, where you can decide where to put the TV and rearrange the furniture on a whim.

The only downside to the set is if there is a power outage they don’t have the backup of an open fire. An outage as a result of snow in March 2018 meant the family had to decamp to one of their parents’ homes. There is no fallback but is it worth having something there 24/7 obstructing the room for possible usage once every three years, he asks. The answer is a resounding no.

In favour of an open fire

Not everyone is as hearthless about the hearth. Writer and performer Caitríona Ní Mhurchú loves its romance.

In the house she shares with her partner, musician and journalist, Niall Toner and their nine-year old son Faolán, Santa will be coming down the chimney in the manner that Mr Claus has done so for generations.

For the family, the fire is more than just festive, it is welcoming, says Ní Mhurchú. “I love looking into it and the colour of it, Faolan says.

“You’re in a different space with an open fire,” she continues. “You can gaze into it.”

It also reminds her of her grandmother’s house in Rathkeale, in west Limerick where the fire in the Aga in the kitchen was never allowed to go out, echoing an older tradition practiced on the Blaskets and in other villages along the western seaboard where embers from the old house were used to light the first fire in a new house.

Every night in Rathkeale her grandmother would bank the ashes around the embers and excavate them in the morning. “That sound, the banging of metal on metal and the smell of it being reignited as you lay upstairs between flannel sheets as you smelled the rashers being cooked for breakfast.”

Everything revolved around it, she recalls. “Huge canteen-size kettles of water, the kind you’d see in a barracks, were always atop the stove, the notion being that if anyone dropped in they could be served a cup of tea immediately.”

In Ní Mhurchú’s own Dublin home, lighting the fire is a luxury. “It indicates that that there is time to sit down and enjoy it. There’s a rhythm and commitment to it and that’s what’s nice about it. On average I only light it twice a month. I need to be home for about six hours to commit to it. It’s a gentle, romantic thing. I wouldn’t light it to watch TV but rather to talk, play a board game or read.”

She confesses to using fire logs but when she has the time still likes to do it the old fashioned way, with twisted papers surrounded by cipíní or kindling and a triangular arrangement of briquettes or turf, if she has any.

In a former home she had a fireplace in her bedroom. “While wildly impractical it was glorious. You would read a book by it, have it to warm your pyjamas and then get into bed. It was living the 19th century heroine dream.”