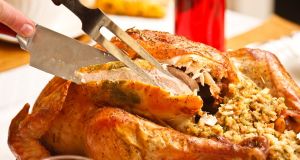 Many images evoke Christmas: a delighted child hugging a bulging stocking; a carol singer clutching sheet music in the snow; a middle-aged man with a rictus grin beneath his paper hat, hacking a turkey in front of his hungry family as they inwardly intone “for feck’s sake just give the carving knife to mum”.

This last scenario will not occur in our house because firstly: I don’t intend to wear a hat for more than three minutes after pulling my first cracker and, secondly: the knife will be keen as a razor.

A blunt blade is more dangerous than a sharp one: without a decent edge it’s less efficient and harder to use. This can cause raised blood pressure which may result in the carving knife being pointed threateningly at the first to complain of shredded breast or minced thigh.

Christmas dinner can be a minefield: moods can switch in an instant, and the wrong knife in the right hands can also be comic.

I remember the only time my wife and I ate that meal alone. I served a fat duck accompanied by a first rate St Emilion which I had been rigorously testing for general tastiness. The fat in the roasting tray combined with the wine in me to produce a double lubrication.

Then a slip of the knife rendered the bird airborne again, albeit for a very short flight. It slithered across the floor, and slapped to a halt by the fridge. I bent over to retrieve it – steadying myself briefly with the carving fork – and continued with an air of nonchalant dignity, whilst my wife made a suppressed whinnying sound.

This year, to avoid any festive frustrations, we plan to have every blade in the house honed like a samurai sword. The whiff of potential danger might give Christmas Day that thrill of excitement we’re nostalgic for since our sons stopped believing in Santa.

Christmas is evolving for them, but neither is yet old enough to carve the turkey. It’s an adult rite of passage which I messed up at my first attempt.

I was in my early 30s when my mother relinquished the role. It was a large bird and, aware of huge responsibility, I chose the apparently easier option of mum’s recently-acquired electric carving knife. It wasn’t elegant. Everybody got a thick slab of breast with their inch of thigh bone and my brothers still mockingly chortle about “turkey steaks”.

I have since improved my technique and settled on my preferred knife – a Sheffield blade I’ve had for 40 years. My wife uses a Swiss knife just as old and we each have our own favourite steel. Hers is more effective but mine makes the best noise when whipped across the blade.

And we both like different carving forks. Mine has a flip-up safety guard to prevent a re-enactment of a time when the knife slipped whilst I was hastily cutting cold beef for a sandwich. I swore softly when I saw the thin line of blood across my finger and then fainted.

Apart from our separate carvers, and the long slender-bladed ham knife, there are many other implements to be prepared: general kitchen knives naturally, but also penknives to address over-zealously wrapped gifts with multilayered Sellotape and recalcitrant double-knotted ribbons.

Then there’s the axe for Yule logs to keep the stove merrily burning; and the secateurs to harvest decorative holly and ivy from the hedge. And maybe we need a set of poultry shears too? All must be whetted till they glitter like a phalanx of steel icicles.

It is a shame our kitchen is too compact to adequately display such a dazzling array. There’s limited counter space for a knife block and little room for one of those magnetised strips from which to hang knives in pleasingly graded sizes.

I’d love enough wall space to arrange a spread of glinting blades like those in a museum armoury; or alternatively, a cunningly hidden recess familiar from spy movies. A secret door would slide back with a whisper to reveal a gleaming arsenal of subtly back-lit implements.

I’d carefully consider my choice whilst sipping fine whiskey from a crystal glass then suavely murmur “yes, I think the two-inch paring knife will do”.

As it is, we have an extremely hazardous drawer packed with all our sharp instruments. Exploring it is playing a combination of Lucky Dip and Russian Roulette. If I rummage too vigorously for a filleting knife I’m as likely to slice a thumb or withdraw a hand with a skewer under a finger nail.

Still, if Christmas Day goes to plan and I manage to arrange another decent St Emilion I shouldn’t feel too much pain.