Boho rhapsody for a wedding at home 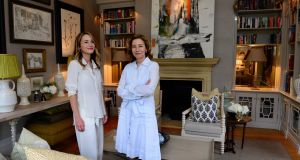 “We never even discussed other venues, we all just knew we’d get married at home, in the garden,” says Rebecca Roe of interior design firm, Hedgeroe Home, who today will tie the knot with fiancé Frederick Roberts, and afterwards will host a bohemian-style reception at the family home in Kilternan, Co Dublin.

Having toured Bishop’s Vale, the Roes’ nine-acre family property, complete with six-bedroom Georgian-style house, it’s easy to see why nowhere else could hold a torch to the fairy-tale setting at the foothills of the Wicklow Mountains. The gardens have newt-filled ponds, gurgling fountains, wisteria-clad terraces, comely stables and ducks flapping along the flagstone pathways. The house has a laid-back, Hamptons-style vibe with lots of space for a party.

Bishop’s Vale was built by Rebecca’s parents, Rhona and Ken, in 1999. The house and gardens were designed by Rhona, who has an impressive interiors background, having cut her teeth in London with Sir Terence Conran before becoming co-director of CLR Designs, which oversaw prestigious projects such as the redesign of the Shelbourne Hotel, Radisson St Helen’s Hotel, Trump International Golf Links and Hotel Doonbeg and Mount Juliet to name but a few of the schemes she worked on before before setting up Hedgeroe, in 2007. Rebecca joined the family firm in 2014 and most recently has released her own collection of furniture.

“We’ve literally done nothing to the house since 1999, but last April when Rebecca announced her engagement to Fred, and their wish to host the reception in the garden, it put a fire under us to get the house in ship shape,” says Rhona.

“The first thing we did was re-evaluate the access to the main house as there was only one back door that wasn’t going to work well with 180 guests coming through it,” says Rhona. Despite the size of the house, which has 600sq m (6,480sq ft) of accommodation, the Roes insist the small snug, just off the kitchen, is where all they gravitate to every evening, to watch TV and to watch the sun go down. They’d always felt they should have put in an access to the garden here, “So this was an opportune time to knock through a hall in the wall and put in a second back door,” says Rhona. While they were at it, they installed a deep-south-style veranda, that wraps around the south-west corner of the house and where wedding guests will be able to lounge with cocktails, and take shelter if the rain arrives.

The garden was their next big restoration project. “Mum and I have been out there almost every evening for the past eight months, to ensure it’s in full bloom and looking its best for today,” says Rebecca. The lawn, which looks ready to host the Ryder Cup, Rhona says has taken them eight months of regular weed and feed treatment to get looking so lush. “We did weekly culls of all the greenery and pruned the trees and bushes back to their stems over winter. Planting bulbs, climbers and flowers which we’d gauged would be in full bloom for June 23rd, was next on the agenda. I haven’t spent so much time in the garden in years but it’s so therapeutic, it didn’t feel like a chore at all,” says Rhona.

“We’ve become great pals with the crew in Scalpwood Nurseries down the road over the past year and took their advice to plant lots of Iris, peonies, and wisteria plus we’ve grown new herbs and vegetables too, so the caterers could use home-grown produce too,” says Rebecca. As if that wasn’t enough effort on the gardening front, a large section of garden to the side of the house, which used to be fenced in for small kids to play in, has now been landscaped into tiers to make for an easier walkway down to the new veranda area and new doorway the main house.

The reading room – the other main room which fronts onto the garden – was also treated to a makeover for the big day. “It was a very dark red and looking a bit dated so we’ve painted it all in neutral stone shades, added some textured wallpaper, added more contemporary accessories, cushions and throws and it’s a much more open and inviting space now. We’ve also ear-marked in here for wedding guests to congregate in, if they don’t want to be outside,” says Rebecca.

Rebecca and her fiancée Fred were adamant they wanted the wedding to be “very chilled-out and relaxed and not at all stuffy or formal, so we chose this really cool, large canvas tent from LPM Bohemia. It’s really vintage in style, with wooden poles, hemp ropes, hessian flooring and we picked a beautiful cotton print lining that will line the walls and roof, which almost takes care of the all the decoration in itself,” says Rebecca.

For the table settings and flowers, Rebecca wanted to keep the vibe earthy and botanical, and sourced a beautiful green peacock motif Wedgewood dinner set from Cater Hire, which she’s going to team with green fern runners (fresh from the garden, of course), vintage crystal glassware, that they sell in the Hedgeroe online store, and simple white charger plates and silverware.

“We actually did a test table one evening, and set up all the elements on one of the trestle tables we were renting, then had our caterers, Black Sheep Foods, make the wedding dinner for us and we ate and dined as if we were guests. It made me realise we didn’t need the flowers or vases I had originally planned, and that there was no room for the candles etc. It was great to find all that out then rather than on the day and we made a few tweaks to the menu too when you see it all working or not working together,” says Rebecca.

Instead of flowers, Rebecca has been working with local florist, Mary O’Gara, on creating a big chandeliers-like centrepiece, made from branches, ferns and oodles of greenery to hang from the roof of the marquee, in canopy style over all the diners.

The garden will be lit up come dusk with hundreds of copper LED stars, that look like mini fireworks, and cocktail bars and chill-out zones have also been assembled for guests to enjoy outside the main tent.

In keeping with here boho theme, Rebecca has shunned the typical white dress and instead is wearing ivory silk palazzo-style pants and a top she got made online from India. “It was a bit of a gamble, ordering your wedding gear from the internet but it turned out just perfectly,” says Rebecca.

After such careful planning and preparation, the wedding will most likely turn out perfectly too.