East wing of Headfort School on six acres of gardens for €1.5m 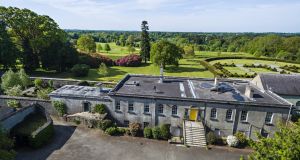 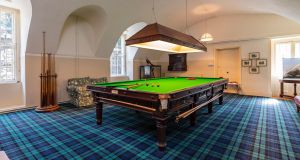 Headfort Demesne’s origins trace back to the 1600s but the house itself was constructed in the 1760s, for Thomas Taylour, Lord Headfort, designed by George Semple.

The property is of considerable architectural heritage because the interiors of the main house – a renowned boarding school since 1959 – were designed by Robert Adam, and represent the last significant work by Adam to survive in Ireland today.

The estate once stood on a sprawling 22,000 acres, and stretched all the way to Cavan, where Virginia Park Lodge currently run by celebrity chef Richard Corrigan, was the original hunting lodge for Headfort.

The estate was subsequently purchased by industrialist BJ Kruger, who used the east wing – known as Headfort Court – as his private hunting lodge. His passion for hunting is evident in the basement, where a full polar bear hide hangs above the fireplace in the snooker room.

The current owners, who have lived here for the 27 years purchased the wing after Kruger died, and they engaged conservation architect John O’Connell to oversee the restoration of the historic single storey over basement property.

Despite being a wing, the property extends to a vast 683sq m (7,352sq ft) and sits on just over six acres of remarkable gardens. In addition there is a one bedroom self-contained apartment adjacent to the stables and six loose boxes.

All the accommodation is on the upper floor, and includes six bedrooms with three formal reception rooms. O’Connell’s design added wainscoting and shutters in addition to lowering the ceilings to accommodate insulation.

Outstanding details include intricate coving, superb architraves, period fireplaces and the original limestone flagstones which sat hidden under old linoleum for years. “They are over a foot thick and it took three men to lift each one,” says the owner, who has decided to downsize.

The basement houses an enormous laundry room, various store rooms and a strong room – complete with solid metal door. The old cabinets remain where Lord Headfort kept his gun and silver collections – at one time he was one of the wealthiest men in Ireland.

While the house is indeed beautiful it is really the gardens that will capture a buyer’s heart. Set over 6 acres, they include a walled garden laid out in the Victorian style with box hedging framing blooms of lavender. It sits alongside an old potting shed where the family have hosted drinks receptions for weddings.

It is the rhododendron and azalea collections though that make these gardens important. Planted in the 1890s as seedlings sourced from Burma, Tibet and China by George Forrest, the intrepid explorer known as ‘Scotland’s Indiana Jones’, they have recently been catalogued by Séamus O’Brien; head gardener at The National Botanic Gardens at Kilmacurragh, and Ireland’s leading authority on the flora of China.

The property is for sale through Savills with an asking price of €1.5million.