A house that was ‘crafted, rather than built’ 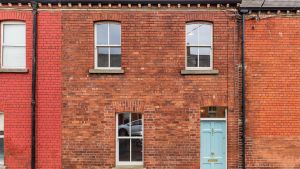 This is a classy, laid-back, very likeable house with lots of light and any amount of clever design ideas. Vendors Aoife and Hamish Graham bought it 15 years ago and spent 10 years working on it themselves, “a labour of love; you could say the house was crafted rather than built”, Aoife says.

“It was a shell. When you walked on the floorboards, your foot went through and took the carpet with it. We went back to the brick walls, worked around the old features and kept them safe.”

They lived in an upstairs room until the children came along, two of them. Then they got a builder to add an extension, designed by architect Nuada MacEoin, with kitchen/ family room, bathroom overhead, underfloor heating, “all the structural stuff”.

They’ve got the attic conversion to thank for precise knowledge of the building’s date. While revealing the brick they found the original plasterer had inscribed his name and date: H. Foy 31/10/04 is exposed now, a piece of living history on the attic wall.

The opened-up hall floor is full of light, space and high ceilings. There are a couple of large Velux in the pitched ceiling of the kitchen/family room, as well as wrap-around picture windows onto the garden and a thriving Japanese maple (a gift from Aoife’s mother, Carmel Buttimer, who runs Ticknock Gardens).

Double glass doors lead to a shining, hardwood deck with a high brick wall. From there it’s a step down to the pebbled garden, where an original window sill has become a bench.

Original features dictated the style of the front, formal drawingroom and hallway. A cast-iron fireplace has an understated elegance, the hallway corbels are original. The rear diningroom has exposed, structural steelwork and a guest toilet is cunningly concealed under the stairs.

The impressive family bathroom, with standing bath and separate shower, is on the return. The main, rear bedroom is off the first landing and has a cast-iron fireplace, two other bedrooms face the front. Carpeted stairs lead to the second storey attic conversion, from where there are views of the city and mountains and H Foy’s signature on the wall.

The “community is great, the street magical”, the Grahams assure. They will miss the “massive” yearly street party, it will be “heart wrenching” to leave, but they want to be closer to their families for the children.