Where the light shines in on Clanbrassil Street for €895,000 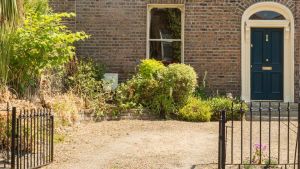 When the owners of 53 Clanbrassil Street Upper bought their Dublin 8 home in 2003, it was in walk-in condition. The previous owner had taken it on just a year previously when the house, built in 1829, had fallen into considerable disrepair and her renovation involved gutting the house and putting it back together, with period details either painstakingly restored (window shutters), remade (sash windows and teak front door) or sourced in architectural salvage.

She also made some of the key layout choices that still stand – the main bedroom runs the width of the house to the front, the second bedroom, a double, is to the rear, while what was a third bedroom in the return is now a sizeable bathroom with a freestanding bath, a shower and a cast-iron fireplace.

There have been major changes since 2003 though. In 2014, the current owners knocked the galley kitchen to the rear and built out and across – creating a large open-plan kitchen, dining and living area. The style is an easy mix of contemporary and traditional – with the freestanding kitchen designed with timber painted units and a Belfast sink.

Natural light pours through five Velux windows, and a new window opens into a tiny inner courtyard outside the rear reception room. A glazed wall of windows and doors at the extension’s rear opens out to the house’s most surprising feature – its 24m-long rear garden – a real bonus in a house within walking distance of the city centre. Just outside the extension, which brings the floor area of the house to 164sq m (1,765sq ft), is a paved patio.

There are two reception rooms although new owners, depending on their needs, might consider using the rear one with its cosy panelled ceiling as a third bedroom, leaving the larger of the reception rooms, the one to the front with its cast-iron fireplace, sash window and wide-plank flooring as a living room.

This upper part of Clanbrassil Street – which links Leonard’s Corner to the canal – once a forgotten stretch on this busy main road, has seen many changes since the owners bought 15 years ago, not least the many great restaurants which have opened on the nearby South Circular Road.

The house is mid-terrace and there is off-street parking for two cars. Number 53 Clanbrassil Street Upper is for sale through Felicity Fox, seeking €895,000.