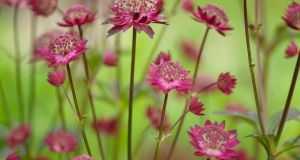 Are you in search of long-flowering, easy-to-grow plants that will add oodles of oomph to your June garden? The sorts that experienced gardeners refer to as ‘great doers’ because they’re always so obligingly reliable? Then here’s a useful little short list to inspire you:

1) Astrantias are one of the quiet workhorses of the summer garden, with graceful clusters of starry pollinator-friendly pincushion flowers in shades of silver, shell-pink, rose and deep plum. A hardy, long-lived, clump-forming herbaceous perennial which dies back down to the ground with the first hard frosts and then reappears the following spring, it loves a fertile, humus-rich, moisture-retentive soil in either full sun or light shade. Commonly known as masterwort, many excellent cultivars are available but in particular look out for Astrantia ‘Buckland’ (very long-flowering with large silver-pink blooms), Astrantia ‘Gill Richardson’ (port-wine flowers on sooty-dark stems May-July) and Astrantia ‘Ruby Wedding’ (a longtime favourite of Irish gardener Helen Dillon). Most varieties reach an average height and spread of 75cm. Make sure to cut back the flowering stems as soon as they’ve faded to encourage a second, later flush of blooms. Astrantias are great as cut-flowers and can also be dried to use in dried flower arrangements.

2) The tall, graceful flower spires of foxgloves (Digitalis) add height and vertical interest to the pretty froth of other June-flowering plants such as Alchemilla mollis and sweet rocket (Hesperis matronalis). Of the many different kinds available, the pale peach Digitalis purpurea ‘Sutton’s Apricot’ is a beautiful old variety that’s stood the test of time as has the white-flowered Digitalis purpurea ‘Alba’. Best planted in generous drifts into a moist but well-drained, humus-rich soil in either full sun or light shade, it makes a lot of sense to raise them from seed. Now’s the time to do just that (recommended seed suppliers include Galway-based seedaholic.com and mrmiddleton.com) but you  can also buy flowering plants from good garden centres at this time of year. Cut away the faded flower stems and they’ll produce a second flush, or leave them to allow the seed to ripen and they’ll almost certainly self-seed.

3) The dainty Welsh poppy, Meconopsis cambrica, is a feature of all the best flower borders from now right through the summer, with its translucent, paper-thin flowers in shades of lemon, gold and apricot-orange. While it’s a prolific self-seeder in the right growing conditions (a cool, moist but well-drained soil in light shade), its graceful presence means that it’s rarely obtrusive, while it’s also happy to conveniently self-seed into little nooks and crannies in paving stones and old walls. To encourage it to colonise, simply harvest the ripe seeds and sprinkle them generously around your garden. Plants are rarely available to buy in garden centres, but you can introduce it into your garden by begging a  few ripe seedpods off a gardening friend or by buying seed to sprinkle around the garden in the coming weeks. A double-form, Meconopsis cambrica ‘Flore Pleno’ is also available.

4) Sanguisorbas belong to the so-called new wave of modern herbaceous perennials whose popularity has risen greatly in recent decades as gardeners strive for a more naturalistic style. Related to the edible salad burnet, their airy clouds of flower bobbles appear atop tall, slender, wiry stems throughout the summer months. One of the best is Sanguisoba menziesii, a particular favourite of well-known Wicklow gardener June Blake, with fluffy, maroon-coloured bottle-brush flowers that appear from June until September (don’t deadhead these as the seedheads are equally decorative). Another is Sanguisorba ‘Red Thunder’, which is excellent intermingled with ornamental grasses. All sanguisorbas like a moisture-retentive but well-drained, not overly fertile soil in full sun or partial shade.

5) If you’re looking for a small tree/ large shrub with summer flowers and multiple seasons of interest, then it’s hard to beat the Chinese dogwood, Cornus kousa var. chinensis, whose very pretty flowers appear in late May-June and are followed by highly ornamental, strawberry-like fruits and excellent autumn foliage colour. Fully hardy and happy in full sun or light shade, it does best in a sheltered garden and an acid to neutral , well-drained fertile soil enriched with plenty of well-rotted leafmould, where it will reach an average height and spread of 3m to 5m x 7m. In small gardens  it can also be fan-trained against a wall . Several varieties of this deciduous species are quite widely available including the lovely ‘Miss Satomi’ (dark rose-pink flower bracts).

6) Geums are another genus of ultra hard-working, hardy, floriferous, long-flowering perennials that deserve a place in almost every Irish garden, producing a multitude of pretty, long-stemmed flowers in a wide range of colours from June until August or even later . Old reliables include the yellow-flowered variety known as Geum ‘Lady Stratheden’ and the scarlet Mrs Bradshaw’ but if these bright colours aren’t to your taste, then some of the modern varieties are excellent for their more subtle flower shades including the apricot-rose  Geum ‘Mai Tai’ and Geum ‘Cosmopolitan’ as well as the compact, ultra long-flowering (April-November) deep-pink Geum ‘Flames of Passion’ . All geums like a moisture retentive, fertile soil in full sun and light shade. Cut faded flowers stems back hard to encourage the production of new blooms.

8) If roses are the queens of the June-flowering climbers, then clematis are surely its kings. Hardy, versatile, floriferous, fast-growing and long-flowering, these oh-so-pretty climbing plants will happily clamber up a pergola, arbour, wall or even a large shrub/ small tree while they’re also the perfect companion plants for climbing and rambling roses. The early large-flowered hybrids such as pink-and-white Clematis ‘Nelly Moser’ , purple-blue ‘The President’ and violet ‘Lasustern’ , will bloom throughout June (with a second, smaller flush in early autumn) and can compete with any rose in terms of flower size and visual impact. Give them a fertile, humu-rich free-draining soil regularly enriched with manure in full sun or light shade and cut the old flowering stems back to 25-30cm in spring. Add a few varieties of the lovely Clematis viticella for a floral display that will last until autumn.

You’ll find many of the plants mentioned for sale in good Irish garden centres or at some of the specialist plant fairs taking place around the country over the coming months (see irishspecialistnurseriesassociation.com).

First spotted in Northern Ireland in 2002, Asian lily beetles are now a common garden pest in this country where they cause serious damage to many different species of fritillaries and lilies.

The adult beetle is very easily identifiable by its bright scarlet wings and thorax (unlike the environmentally beneficial ladybird, which does so much good work in keeping garden pests at bay, the lily beetle isn’t spotted) while both its larvae and its orange-red sausage-shaped eggs can be found on the undersides of the plant’s leaves.

Both adults and larvae feed on the leaves and petals of host plants before the adult burrows down into the ground to pupate. The best organic control method is to inspect vulnerable plants regularly and, if you spot the beetle, its larvae or the eggs, to squash them between your finger and thumb immediately.

Early June is an excellent time to sow seed of biennials such as Sweet William, Icelandic poppies (Papaver nudicaule), wallflowers and foxgloves (these are technically biennial). Sow seed  in the coming weeks into seed trays or into a seed bed outdoors, then prick out/thin the young seedlings to allow them enough growing space to develop before planting them into their final positions in September for flowering next year.

Seed stockists include most good Irish garden centres as well as specialist suppliers such as Galway-based seedaholic.com, Dublin-based mrmiddleton.com and UK / online seed suppliers including chilternseeds.co.uk

If you sowed lots of rows of vegetable seed in the preceding weeks, they’ll now need to be carefully thinned to the recommended spacing in order for them to develop into strong, healthy, productive plants. Left un-thinned, they’ll never develop to their full potential. It’s also important to keep young seedlings well-watered during any prolonged dry periods as their root systems are still  small and undeveloped.

Remember, also, that carrot thinnings should always be quickly bagged and binned to deter the carrot fly pest, which is acutely sensitive to their smell.