What is the best starter musical instrument for a child?

Pros and cons to whatever kids start to play, but the experience is unlikely to go to waste 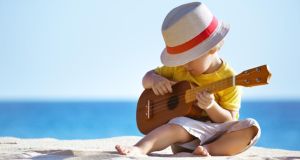 Ukulele: Small, easy to handle and relatively cheap ... but there's been more than a whiff of ‘hipster’ in its revival

There are pros and cons to whatever is chosen, but the experience is unlikely to go to waste. A lot of people start on one instrument and then move onto another, says Aura Stone, who believes that “when you are exposed to the instrument that is for you – you will know”.

Growing up in the UK decades ago, by chance it was a double-bass teacher who had a slot for her in a free music-tuition scheme when she was nine and it’s an instrument that she continues to play professionally to this day.

“My parents are not musicians. If I had not had that opportunity, I don’t know when, or if, it would have popped up again,” she says. Her own children, Jake (10) and seven-year-old Maya, have been raised on music and play the piano and violin respectively at home in Blackrock, Co Dublin.

The most common starter instruments

Piano/keyboard
Pros: You can see and touch the notes. There is also an element of instant gratification because when you play a note it will be in tune – unlike, say, a violin – so a child can very quickly reproduce a tune that is recognisable.

Cons: It’s less “social” than others; it is less likely to be included in ensembles and, if it is, generally there will only be one, says Newpark Music Centre director Andrew Jordan, who encourages young players to join choirs, to counter the traditional solitary nature of classical piano lessons and practice. A half-decent piano to practise on at home is a significant financial investment. However, a cheaper keyboard, with weighted notes, would be perfectly fine to get going on.

Violin
Pros: A range of child-sized instruments is widely available for small hands, down to the 1/16 for children aged three-five. As a starter string instrument, it lends itself easily to group tuition and can soon become a passport to ensemble playing and orchestral groups.

Cons: It is going to take longer to develop a sound that is pleasing to the child – nevermind any parents within earshot. It is also more demanding physically, involving standing and requiring dexterity between holding the violin and using the bow, which will take longer to master.

Recorder
Pros: Cheap and durable as a starter wind instrument. The finger pattern is similar to other woodwind instruments, which makes it easy to move on to say, a clarinet or saxophone later. Progression to playing simple melodies will come soon enough and it’s usually taught in groups, which appeals to children.

Cons: While it has a rich heritage and there are professional recorder players, it is unlikely to be anything more than a starter instrument. It struggles to rise above its association with less than tuneful recitals played en masse by children with varying degrees of competency.

Ukulele
Pros: Small, easy to handle and relatively cheap. It’s simpler to play than a guitar, so a child will be able to play tunes quite quickly.

Cons: There has been more than a whiff of “hipster” in the revival of this instrument’s popularity over recent years, however, that may well make it all the more appealing.

The voice
Pros: It’s free and it is the one musical instrument that parents should encourage children to use from a very early age, whenever they have the chance. Following this basic groundwork, participation in a choir – under the guidance of a skilled vocal tutor – is an excellent foundation for a musical education.

“It awakens the musical muse within them,” says Dr Ite O’Donovan, whose Dublin Choral Foundation is modelled on the cathedral chorister tradition but adapted to the secular world. “They are suddenly captured by the whole experience and, no matter what they do from a vocal point of view, it will carry with them to instrumental music.”

Cons: Formal, individual vocal tuition is not recommended until considerably older – some say 12 to mid-teens. Solo singing classes may be very off-putting for shy children, or as they get self-conscious in adolescence – but there will always be a choir they can blend into.

What instruments are better to leave until a child is older?
From age nine onwards, almost any instrument is accessible, as long as the child is physically able for it. For instance, the saxophone may still be a little too unwieldly.

Jordan doesn’t believe the question of whether or not children have most of their permanent teeth is an issue before they start playing wind instruments. Braces can be a bump in the road, he acknowledges, but the child will adapt and cope.

Hold off on a guitar for a while, he suggests, and maybe try that maligned ukulele instead.