Obstetricians and midwives on what they learned from giving birth

Do medical mothers-to-be put themselves under additional pressure to be ‘uncomplicated, low-key patients’? 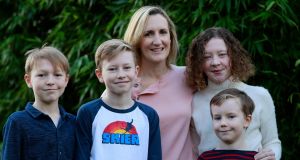 Prof Fionnuala Breathnach, who works in the Rotunda Hospital, with her children (from left) Oscar, Dara, Éabha and Matthew. Photograph Nick Bradshaw

When obstetricians and midwives give birth themselves it isn’t always what they expect, despite their professional training.

Prof Fionnuala Breathnach, obstetrician and maternal foetal medicine specialist at the Rotunda Hospital, Dublin, believes medical mothers-to-be can put themselves under additional pressure to be “uncomplicated, low-key patients. I remember in the run up to my first baby, feeling that I would be mortified if I didn’t push well!”

Breathnach had been working as an obstetrician for five years before giving birth to her eldest, daughter Eabha. “During these years, I would have been exposed to every conceivable complication that can occur in obstetrics, and there’s no doubt that experience coloured my expectations,” she recalls.

“My own delivery therefore surprised me by being so uncomplicated, and my low expectations led to postnatal euphoria. This contrasts starkly with those patients I sometimes see who have such high expectations for achieving an uncomplicated and positive experience, that they set themselves up for immense disappointment if their vision for labour and delivery is not realised, through whatever circumstance presents itself on the day.”

I have developed a very positive attitude to epidural pain relief

“Ultimately, having been on both sides of the fence, my advice to women is that nobody’s labour experience should be considered relevant except their own,” says Breathnach, who also extols the value of epidurals, if required.

“Both as a patient and as a care provider for women in labour, I have developed a very positive attitude to epidural pain relief. It allowed me to have four very enjoyable labours, and every day I see epidurals transforming a sometimes intolerable experience into an enjoyable one.”

Margaret Hanahoe had worked as a midwife for 12 years before her daughter was born. “I had delivered close to 2,000 babies but I remember asking the big question to my friend on the delivery ward what labour was really like? When she described pain I could not imagine, I decided I was having an epidural. The lead-in to labour was slow. I had irregular pains for 36 hours before the real ones even began, so I was tired before I even started, but labour with an epidural was actually fine.”

What wasn’t fine for Hanahoe, however, was feeding. “I had completed a breastfeeding course for lactation consultants before I had my daughter and thought I knew everything. From the minute she was born I could not get her to latch and feed. I had all types of help, midwives on the ward, lactation experts and consultants at home, all unsuccessful. I pumped and fed her for six weeks until I gave up due to exhaustion.”

Hanahoe went on to set up the Community Midwives programme at the National Maternity Hospital, and at 42 found she was pregnant again. “I now had a completely different outlook on labour. I had a normal birth in under three hours and he could have jumped on the breast from the door. A completely different experience.

“So what do I tell mothers now? Breastfeeding is the best way to feed your baby but if it is not successful reconsider your options.

“Also labour is only a day, so no matter what happens it’s over in a few hours with lots of people to mind you. Get support for the few weeks after you have delivered. Have food prepared and help arranged, and look after yourself as well as the baby.”

Noreen Farrelly, staff midwife at University Maternity Hospital Limerick, agrees. She had been a midwife for seven years when she gave birth, “I was surprised at how slow my recovery was after. I assumed after having a vaginal birth I would be ‘up and about’ quickly. It took me longer than I thought but now I realise how important the first six weeks are for healing and bonding with your baby.”

She recommends women read about this “fourth trimester” while pregnant. She also advises women “to be patient” and to “stay calm” in labour. “Being calm helps you to stay in control and leads to a better birthing experience. Also have confidence in yourself and prepare to be amazed at what your body can do.”

Murphy only had a small amount of obstetric training when she gave birth to the first of three sons almost 20 years ago. What she wasn’t prepared for was the length of time she spent in labour after her waters broke. “I was getting despondent and tired so when I went to the labour ward I was very disappointed to be told I was only 1cm. I do remember that feeling when I meet patients now who may think they are further along and are distressed. It helps me understand their disappointment.”

Her three birth experiences have all been very different, but very positive. So how have they influenced her as a doctor?

“I’m conscious that even in a “normal” experience if it’s the first time it still can be worrying. I remember after my first son was born he developed jaundice. We were due to go home but had to stay in. I was in floods of tears and my husband was not far behind me. So I can empathise when people are worried, even by minor medical complications.”

Her advice to expectant mothers? “Even if you’re experienced in the field, you don’t know exactly what’s ahead. You might have it in mind to do without an epidural, but don’t beat yourself up if you have one. Have an open mind. Different things can happen. People can have an emergency section though they’ve had a perfectly normal pregnancy. It helps if people realise that it’s a biological process and we don’t always have control over how it goes.”