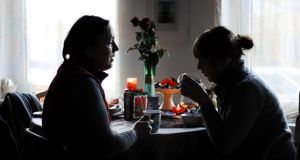 The study found participants who drank high-temperature tea, consumed alcohol excessively, and smoked had an oesophageal cancer risk more than five times greater than those who had none of those habits. Photograph: Getty

Drinking very hot tea may create an increased risk of cancer of the oesophagus in people who also drink alcohol and smoke cigarettes, a new study has found.

The findings, based on long-term follow-up in more than 450,000 participants in China, are published in Annals of Internal Medicine.

Oesophageal cancer is a serious and often fatal disease involving the uncontrolled growth of cells in the oesophagus, the tube that carries food and liquids from the mouth to the stomach.

Drinking alcohol excessively and smoking on a regular basis are each known to increase the risk of it.

Although previous studies suggested that drinking boiling hot tea might also increase the risk for oesophageal cancer, they could not assess whether this observation was the result of alcohol or tobacco use.

In the Chinese study, participants who drank high-temperature tea, consumed alcohol excessively, and smoked had an oesophageal cancer risk more than five times greater than those who had none of those habits.

However, in the absence of both excessive alcohol consumption and smoking, daily tea drinking was not associated with oesophageal cancer risk, regardless of tea temperature or other consumption factors.

The authors said that to the best of their knowledge, the study was the first to provide compelling evidence of joint associations between high-temperature tea drinking with established risk factors of excessive alcohol and tobacco use and oesophageal cancer risk.

While they warned of the limitations of the study, they said the results suggested abstaining from hot tea might be beneficial for preventing oesophageal cancer in those who drink alcohol excessively or smoke.

They said further studies were warranted to confirm the interactions observed in the paper published on Monday, and said studies that directly measured tea temperature were particularly encouraged.

There are about 450 cases of oesophageal cancer in Ireland each year and about seven out of 10 patients have symptoms for more than three months before talking to their GP.

The Oesophageal Cancer Fund charity has invested over €1 million in awareness campaigns to increase the public’s knowledge of the symptoms that can be early warning signs. It will hold its annual “Lollipop Day” fundraising event on February 23rd and 24th.

Case study: ‘I just knew something was wrong’

Mary Quinlan (69) from Cashel, Co Tipperary, was diagnosed with oesophageal cancer in early 2015 after some months of investigations, including an ultrasound and an endoscopy.

She says she just “knew something was wrong” even though her initial visits to her GP and her blood tests showed nothing amiss.

The diagnosis came as a shock, she says. She had always been very healthy and had walked for a half an hour every day during her lunch break, before her retirement in July 2014.

Even the mention of the word cancer when the consultant confirmed it was awful, she says.

“I was such a strong person and had never been sick.”

She was aware oesophageal cancer was usually associated with smoking but she had never smoked in her life and considered herself a social drinker at “maybe one [drink] a month”.

Mary underwent six weeks of chemotherapy, with radiotherapy every day for about the same period, followed by surgery. Her farmer husband Francis, her sister-in-law and some very good friends were there for her to drive her up and down to the hospital in Cork every day, Mary adds.

Her recovery was slow and she could not eat properly for a long time. Even now, her eating habits have changed and her stomach is smaller. She has lost about three and a half stone since her illness.

Mary says she had a “bit of bother” last year when it emerged her bowel had moved up into her chest cavity due to the surgery which had shortened her oesophagus. She had keyhole surgery to fix it.

She is now recovering well and has just welcomed her 10th grandchild into the world.

Mary says she is keen to help other people who are diagnosed with oesophageal cancer and she has found support groups have left her with a very positive attitude.

Asked what advice she would give to anyone concerned about symptoms, she says: “They should go immediately and leave no stone unturned if they have any symptom. They need to get to the bottom of it.”

Read: We chatted alien movies, then he showed how he’d cut me open

‘The virus will be back’: Preparing for the second wave of Covid-19
9