A hair-raising early-morning row over chairs and mirrors 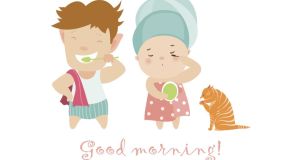 Please hold on a second while I compose myself.

Or, at least, compose my thoughts on the riddle wrapped up in an enigma stuffed into a Russian doll hidden in a labyrinth on the outer edges of a conundrum that is my young teenage daughter’s brain, and process our latest run-in.

She had asked me the night before to call her a little earlier for school, so she could do her hair. This a lengthy and intricate process involving hair-straighteners, clips, false starts, sighs and the occasional expletive, which we may or may not choose to ignore.

Choose your battles, they say – we seem to be choosing our interventions.

She can only use the mirror in the main bathroom for this ritual because, apparently, the full-length mirror in her room isn’t full-length enough to allow her to do all this standing up. Or sitting down without using her brother’s chair from his bedroom – which she often nabs.

“Two more minutes,” she said when I called her before 7am. She was still there 15 minutes later after I came up, having taken out the dog, turned on the heating, and a few other bits and pieces.

She was the one who had asked me to call her, remember?

In the meantime, our boy is finally coming to after being called a few times. He had football training in a biting wind and slanting rain the evening before and had opted for a morning shower.

This one seems to be working better: you’ve got a strong-willed kid so instead of ultimatums you offer options: “You want your shower now or in the morning?” – “morning” – “sound!”

His feet had finally reached the bedroom floor when I noticed the cord from the hair-straightener stretching from the socket in the landing and running under the door of the main bathroom.

“Woooohhh!” she exclaimed, or something like that and stomped her foot. “I neeeddd to do my hair!”

“Yes, but you will have to do it in your own room.”

The bathroom door is flung open and there fuming is something resembling the Evil Queen in Snow White – another woman who had issues with mirrors.

“You never think about anybody else only yourselves,” she bristled, brushing past me and heading for her room, slamming the door behind her.

“Nice try, my boy, now get into that shower.”

My daughter is only getting warmed up. “I will have to get the chair to do my hair properly.”

This caused an almighty rumpus the night before when she had taken it without permission and he wanted it back.

I open the bedroom door and talk talk to the back of her head, as she sits seething on the edge of her bed, beside the floor mirror.

“Look you can’t just take his chair, you know what happened last night . . .”

“It’s your own fault,” she shoots back, “all talk about getting me a new chair.” “Hang on a second here, what is all this anger, shouting.”

She’s still not even looking at me and, of course, I can’t let it pass. I know she is not listening, and cares less, but I feel duty bound to lay on the Dad lecture.

“We said we would get you a chair, but you wouldn’t go with Mom when she wanted to go to Ikea . . . but this is us buying you a chair because yes, you could do with one, but you are not ENTITLED to it . . . we are the ones PAYING for it, not you, so at least some kind of thanks . . . ”

I know I’ve lost because my angry voice has escaped out of me.

“Who’s the one shouting?” she says, all calm and reasonable.

Some pubs are reopening. Here’s everything you need to know about how it will work
8