‘One girl might be popular because she’s pretty, or one boy because he’s sound’

Good looks, sporting prowess, likes on social media – students explain how a teenager gets to be popular 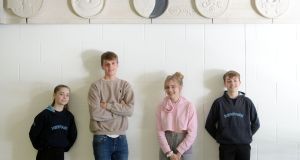 “Popular, according to the Oxford Dictionary, means: “Liked or admired by many people or by a particular person or group.”

However, “popular” can have other meanings for teenagers, so in addition to surveying 100 Irish girls and boys, aged 12-19 years, we asked some others for an explanatory guide to popularity.

Saoirse: “Popularity is how well you’re liked and what sort of reputation you have, what you’re known for.”

Lucy: “There are different types of popular people. One girl might be popular because she’s pretty, or a boy because he’s sound.”

Thomas: “If you’re amazing at one sport you can be popular.”

Nathan: “But generally you have to have a strong personality.”

So what makes boys popular in first year? “Sport and just being funny and nice,” says Thomas. And the girls? “I think being pretty is a really big thing,” says Lucy. “You could be really dry, but very pretty, and that would make you popular.”

What happens as you move into senior classes? “People have stopped caring about being part of that group.” says Nathan. “It’s now about being liked. You can be popular and well-known but not liked.”

All agree social media is a major indicator of how “popular” someone is. “Somebody on social media will be judged instantly by how many likes they have,” says Nathan.

Popularity also means setting trends: “If one girl comes in with new shoes her friends will get them and eventually the whole year will start wearing them.” In addition, “in the three years of the junior cycle no popular person went out with a non-popular person”, says Saoirse. “You’d get slagged so much,” adds Thomas. “That’s just how it goes.”

“I think the younger you are the more twisted it is,” says Saoirse. “When I was smaller there were certain popular people I couldn’t talk to, like your status would define who you could talk to. There was a popular table in one of my old classes. You couldn’t sit there unless they invited you.”

Popularity in and out of school can be unconnected: “It’s different in every school. The popular groups from other schools around hang out together, but not from Newpark,” says Lucy. “It’s status and likability,” adds Saoirse. “By fourth year, if you’re an in-school popular person it’s because you’re liked, if you’re an out-of-school popular person it’s because you’re known, you have a status.”

Seventeen-year-old Finn Ward from Dublin goes to an all-boys school on Dublin’s northside.

“Popularity, he says, is someone who has “many friends and is perceived as cool or sporty. They are into music, party goers, and good with the opposite sex.” He believes you cannot “become popular”. “It is just engrained in everyday life.” However, what makes some teenagers more popular than others is “where they live, what sports they do, and if their sports friends are in the school.”

Sixteen-year-old “Peter” from Co Cork attends a large co-ed school. The key to popularity, he says is “being in fashion, having the latest phone and clothes and haircut – like the Conor McGregor bazze – playing rugby or GAA, and acting the big tough man 24/7. Another reason some teenagers are more popular is they have a hot girlfriend of boyfriend, or have gotten with a hot person. You’re judged on who you hang out with and who you like.”

Lois O’Hare (13) lives in rural Co Louth and is a second-year student at a large all-girls school. “There’s one main group regarded as popular,” she explains. “Everyone knows who they are. There’s a corridor beside the cafeteria and all the group sits there.”

What contributes to being popular, believes Lois, is “being kind and friendly to people, to be funny and to be up with the latest trends. I think being likeable is very important. Some people who are popular can be really mean on the outside. I think some of them are insecure about letting people know what they’re actually like so they have to keep up this mean girls’ attitude, but once you get to know them they’re actually really nice to talk to. I don’t really mind what other people think of me but I like to be friendly to other people and I think that’s the way you should get popular, not by being mean, or who you’re dating."

100 Irish teenagers tell us how they view popularity and likability