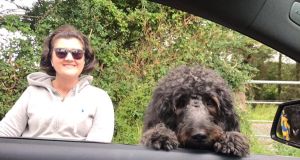 Aisling Glynn and her dog Gina.

Many people reading this will remember watching Jake Carter and Karen Byrne win the finale of Dancing with the Stars in recent weeks. Karen’s sister Linda will remember the night for more than one reason. That evening, Linda got together with family and friends to cheer Karen on.

Being too familiar with the reality of finding an accessible taxi, Linda, who uses a wheelchair, started making phone calls well in advance of going home. She then waited on the side of the road in the cold. For three hours.

Linda had phoned 37 taxi numbers. According to National Transport Authority figures issued that week, there are 847 accessible taxis in operation in Dublin. Maybe Linda was just unlucky?

Unfortunately, my experience tells me otherwise.

As a person with a disability, living and working in West Clare, transport is an absolute necessity. As an able-bodied teenager, I often took the bus to Ennis on a Saturday morning. Once I started using a wheelchair this was no longer an option. As an adult with a disability, my transport needs have changed. I need transport to get to work every day and to attend medical appointments. A few weeks ago my car broke down. It’s a short journey to work, but there’s no such thing as a wheelchair-accessible taxi in west Clare. There are 847 in Dublin.

That’s encouraging, if you travel to Dublin regularly, as I do. I’m very lucky to have an adapted car to get to the train station in Limerick. Irish Rail recommend giving 24 hours notice in advance of a train journey as a ramp has to be placed over the steps to access the train.

The staff who assist are always helpful and kind. But it can happen that someone forgets to make a call and you can find yourself waiting and worrying and hoping that ramp arrives. Not long ago, my sister stepped on to a train to check for a ramp. As she did, the doors closed behind her and the train took off, leaving my other sister and I on the platform (admittedly laughing).

The kindness of others has been a recurring theme in this series. A couple of years ago, in Dublin, I met Charlie. Charlie drives an accessible taxi and he gave me his mobile number. Recently, Charlie was on holidays so I booked a taxi in advance. A standard taxi arrived. Again, the driver was very nice and together we started making calls. It was 2pm, but it still took over an hour for an accessible car to arrive.

A few hours later, on my return journey, the process started again. This time, there were three of us making calls. We also had a taxi app running. It’s interesting to watch the cars disappear when you select the accessible feature on the app.

An hour and a half later, our taxi finally arrived.

Getting in took some manoeuvring because the driver had to move the spare tyre from where he was storing it on the ramp, but we were soon on our way.

On my next trip to Dublin, after finishing work I stayed in town to have dinner. Like Linda, before finishing, we started making calls. Charlie was on a rare evening off. Two hours later, I texted him to see if he had any numbers I could try. He rang and told me he was on the way to collect his wife from the gym. Not taking no for an answer, he collected his wife then drove straight into the city centre for us.

That’s kindness. There’s also luck. You can be in the right place at the right time and an accessible taxi might just drive by when you need it. But you can’t rely on luck. Like the night the battery of my wheelchair died after circling the streets for hours looking for a taxi.

One finally arrived – at 7.30am the following morning. Luckily, it was mid-July and we made the most of it. When I was younger my family and friends would help me in and out of cars and vans and standard taxis. We had lots of great nights out. But one night, while being lifted, my leg got caught in the wheelchair resulting in a broken knee and a cast for three months. That was unlucky.

Last week I had to travel to Dublin for work. This time my journey was a short one from Heuston to the Four Courts.

No taxi required. The doors of the Luas opened and I drove straight on. No notice. No portable ramps. No waiting. No stress. Equal access for all.