When the going gets tough, the men quit and the women kick-on

In the Boston Marathon, the dropout rate for men was up almost 80% from last year 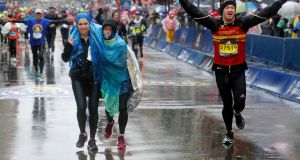 One runner helps another cross the finish-line in the 2018 Boston Marathon. Photograph: Winslow Townson/USA Today Sports

This year’s Boston Marathon, with its horizontal rain and freezing temperatures, wasn’t just an ordeal unfolding amid some of the worst weather in decades.

It was also an example of women’s ability to persevere in exceptionally miserable circumstances. In good weather, men typically drop out of this race at lower rates than women do, but this year, women fared better.

Why, in these terrible conditions, were women so much better at enduring?

The results for Boston, one of the most competitive marathons in the world, were doleful this year – the winning times for both men and women were the slowest since the 1970s, and the midrace dropout rate was up 50 per cent overall from last year.

For men, the dropout rate was up almost 80 per cent from 2017; for women, it was up only about 12 per cent. Overall, 5 per cent of men dropped out, versus just 3.8 per cent of women. The trend was true at the elite level, too.

I’ve run the Boston Marathon twice, including in 2013, the year it was bombed. I’m often tempted to drop out of races, but I never actually have. Pushing through affords plenty of time to question the wisdom of prolonging what is sometimes extreme pain. I’m always relieved when I finish – but I never really consider why I bother.

This marathon made me wonder if gender might play a role. You can find a whole range of theories on why women out-endured men in Boston – body fat composition, decision-making tendencies, pain tolerance, even childbirth – but none offers a perfect answer.

One theory is that women handle cold weather better because their bodies naturally have more fat. In general, it’s true that the essential body fat level – one you can’t medically dip beneath – hovers around 3 percent for men and 12 percent for women (when it comes to racing, breasts aren’t exactly performance-enhancing, but they’re still usually part of the deal). And the insulating subcutaneous fat layer under the skin is twice as thick in women as in men.

But at the same race in 2012, on an unusually hot 86-degree day, women also finished at higher rates than men, the only other occasion between 2012 and 2018 when they did. So are women somehow better able to withstand extreme conditions?

That answer could involve psychology. Endurance may feel objective, but your ability to keep going – even if it means slowing down – is often ultimately up to you.

“When you reach the point that you can’t go on, it feels physical, like an immutable limit,” Alex Hutchinson, author of Endure, told me. “But your physical limits are actually mediated by your brain. In most instances, dropping out is a decision.”

The decision process might connect to the perception, or tolerance, of pain. Here’s a potential, if contentious, factor – childbirth is by most accounts excruciating, and because women’s athletic and fertility peaks are close or overlap, a lot of the female marathoners who race Boston have also given birth.

Keira D’Amato, a 33-year-old real estate agent in Richmond, Virginia, ran much of the race with Sarah Sellers, a nurse who went on to take second place, until D’Amato’s vision blurred and her awareness wavered. She slowed to a fraction of her original pace, so focused on reaching the finish line that she didn’t even know it when she finally got there, in 46th place.

Comparing her experience in the race to the births of her children, D’Amato told me, “I never blacked out during labour.” (Of course, dropping out while giving birth is not an option.) She said she had finished every race she started and added, “that wasn’t going to be the first time”.

Differences could also lie in other decision-making traits. For example, women are known to pace themselves better than men, an advantage in any context but especially helpful in the cold, when a large shift in pace could affect one’s ability to regulate body temperature.

“Men tend to start races more aggressively and take a higher risk approach, so they’re more likely to blow up in the second half,” Hutchinson said. “If you hit the wall at 18 miles in that terrible rainstorm and you’re wearing 7 pounds of sopping wet clothing, there’s a heightened risk you’re going to drop out.”

Women may also be better able to recalibrate their behavior and expectations based on circumstances (even if that doesn’t mean making the more self-preservationist decision to quit altogether).

“Among the athletes I’ve coached, I think I’ve had more women where when it’s bad, they can blow up but they’ll still finish the race, whereas men drop out,” said elite distance coach Steve Magness. “Women generally seem better able to adjust their goals in the moment, whereas men will see their race as more black or white, succeed or fail, and if it’s fail, why keep going?”

Americans in the elite races provided some evidence. The men’s favorite Galen Rupp chased the lead pack until he dropped out around the 20-mile mark with hypothermia; in the women’s race the favorites Molly Huddle and Shalane Flanagan dropped to paces much slower than their goal but still finished. In the early miles, the women worked together; Desiree Linden, another favorite, struggled and told Flanagan she thought she might quit, but hung in to support her teammates a few more miles for the American victory they sought. Then Linden bounced back and won.

“There’s a biological and social tendency for women to tend toward caregiving,” said Adam Grant, the psychologist and host of the TED podcast WorkLife. “So what I would expect to happen is, when the going gets tough, the men either quit or they double down and say, ‘I’m just going to push through,’ whereas women are more likely to reach out to runners next to them and offer support and seek support. Sharing pain and being part of a group can make it easier to withstand pain.”

Of course, the people who run Boston are a self-selecting group. Women are often discouraged from being athletic and competitive, so the female runners who made it to Boston had already overcome more social obstacles than men. They may simply be tougher, and this was a year when toughness worked.

So the simplest explanation is not based on gender at all. This Boston Marathon was ideal for people who thrive in adversity. Top spots for men and women went to amateur runners who juggle training in non-ideal circumstances around work and family. The men’s winner, Yuki Kawauchi, is a high school administrator in Japan; Boston was already his fourth marathon, and fourth victory, of this year.

“For me,” Kawauchi explained after he won, “these were the best conditions possible.”