‘I turned to see my finger, sitting on top of the fence, ring still somewhat in place’

A game of football was followed by hours of complete disbelief 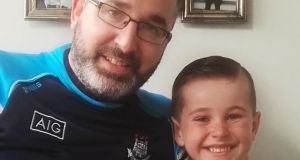 Brian Strahan with his son Matthew

There wasn’t a huge amount that was impressive about my football-playing days. But I could pass. Heading, tackling, athleticism; none of these were strong points. Accuracy in distributing the ball though, was something I could offer. Honed by obsessive childhood practice. So when I sliced my son’s ball over the green weldmesh fence of a local tennis court a few weeks ago, my initial feeling was one of frustration.

Not for the hassle of having to scale a fence to retrieve the ball. But of the apparent waning inaccuracy of my ball control.

Having balanced myself by placing my foot in the marginal gap allowed for the lock, hoisting my frame to the summit of the fence wasn’t particularly onerous. No, but the drama started with a prelude. When I endeavoured to drop my legs down the far side of the fence, the cuffs of my frayed jeans left one leg suspended mid-air, looking like any 39-year-old in such a scenario – ridiculous.

My son’s older friend unhooked them, and I could now drop freely to the synthetic surface. Something was amiss though. I had felt little on dropping to the ground, but there was blood coming from somewhere.

When my eyes bore down on my hand it was a surreal moment.

My wedding ring wasn’t there.

As it turned out, my finger wasn’t there either.

As the remaining bone was sprayed, somewhat fitfully, by blood, I turned to see what at that moment, was an incredulous sight. My finger, sitting on top of the verdant fence, ring still somewhat in place, and resting without an apparent care in the world.

Too young to fully comprehend, a younger nephew and niece stood in bewilderment at this grown man hopping, cursing and shrieking in a somewhat agitated dance routine. My six-year old looked on with a slightly more advanced face of bemusement. The same older friend, and neighbour, was laughing.

As I boomed to go and find help, his laughter continued. Later, it would transpire he thought I was bemoaning my “favourite jacket”. When in actual fact, it was my “f***king finger”.

When reality hit home, he went to seek help.

More familiar faces approached with some trepidation at this cursing, dancing maniac who from a distance, was having a concentrated mid-life crisis for everyone in Rockfield Park, north Co Dublin, to witness.

The operation to remove the remaining, redundant bone was one I craved

A neighbour’s daughter retrieved the semi-retired finger and bagged it. Another neighbour took control of the imminent arrival of the emergency services. My wife arrived, wondering why a mundane trip to the park with hurls, sliotars and a football was culminating in her husband yelping from behind a locked fence.

Living on the doorstep of Beaumont Hospital means the sound of sirens is sewn neatly into everyday background noise. But they never sounded with more purpose then that afternoon.

What followed was two to three hours of complete disbelief, fused with worry of how those around me felt on witnessing such a surreal mess. My son, inevitably, was at the forefront of my mind. But it is an odd mix in situations like this, of logic and panic. Drama and reason.

I wasn’t sure who had or where my finger was, but Christ I wasn’t leaving there without my son’s football. In the emergency room, I was in tune with the conversations about reattaching my finger. Yet I was checking my emails through tears.

Eventually, I calmed and in being transported to Connolly Hospital, I drifted in and out of sleep and felt a strange, pained calm. When I was told the finger couldn’t be saved, the initial upset was replaced with a kind of relief. There is something to be said for knowing. It was ultimately a quick, concrete decision. So many aren’t that lucky.

But there is something to be said about being in the hands of competency. The hospital system is interweaved with personnel and varied procedures and protocols – the fact that the paramedics, nurses, hospital porters and doctors make it work with such precision is a testament to their organisational excellence and expertise.

The pain comes later. The shock wears off and as it does the pain finally finds its place. But it’s bearable. Within hours, logic and practicality sets in. An appreciation it’s not worse, and a recognition for those who have it so much worse. It also illuminates the nonsense of the hypochondriacs you know. It gives you a middle ground. Because ultimately, it’s not that big a deal.

The operation to remove the remaining, redundant bone was one I craved, thanks to the pain. But in the moments leading up to it I had my only genuine moments of fear. I was determined to not go under the anaesthetic. Bring it on, I thought. And it worked, I was fighting the anaesthetic and I didn’t even feel drowsy.

I felt a little bit sorry for the anaesthetist and the surgical staff. Here they were ready to operate and they couldn’t get me to sleep. I even felt a little proud. I wondered how they would handle this. They obviously hadn’t met someone this determined before.

Two hours later I woke up in my hospital bed!

A lot of things stand out in the aftermath of this. A lot of people I meet describe losing my finger in these circumstances as the stuff of nightmares. But it isn’t really. People enjoy the drama of the story. But everyone has their own lives to live.

Awareness of a disfigurement is inevitable. I am aware and I’m sure I always will be. But people will look and feel whatever it is they feel. The bandages aren’t even dispersed yet, and still there’s been the ogling. It is rude, yeah, but so what.

At the moment, it’s an inconvenience in practical terms in a busy home, and it’s painful and it’s restrictive. But, when you strip back the dramatic backdrop to the story, life will continue almost exactly as it has.

I walked home from football with my son last Tuesday. Apart from slagging me for missing a finger ,we hadn’t discussed it too much, mainly because the more you make of something the bigger a deal it becomes. I told him I was impressed with how he handled seeing the accident and not being too upset.

We talked and he agreed he’d tell me in future when he felt sad and we’d talk about it until he felt better.

Because that’s the stuff that matters.

Not how your hand looks.

But how you and the ones you care about look and feel on the inside.