‘The day I started using a wheelchair, a lifetime of self-inflicted pressure lifted’

I always thought using a wheelchair would limit me, but it opened up the world to me 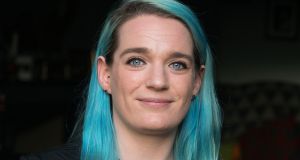 I was born with one bad leg and one good leg. That is what I always used to say as a way to deflect from identifying as someone with a walking disability. For 23 years, I used crutches and carried my entire body weight through my arms and through my good leg.

My bad leg didn’t touch the ground, it had minimal circulation, close to no power and little sensation. My good leg took everything on.

Using crutches gave me incredible arm strength – something I showed off in arm wrestles in group gatherings – but it also gave my elbows the grit of a sailor’s hand due to all the wear and they were permanently bruised. The smallest manoeuvres were a great physical task but for my entire childhood and teen years, I didn’t think much of it. I didn’t think of it at all because I was walking and that meant that I was free.

When I was 16, I was warned that my good leg could start to deteriorate after years of being the dependable one, so to preserve the power that I had in my good leg – my left leg – I had my right foot amputated two weeks after my 17th birthday. The reasoning for that was that a prosthetic leg would see me having two feet on the ground, sharing the weight of my body through both legs instead of one.

It worked but it only delayed the inevitable.

As I veered into my 20s, simple things like turning on a light switch, brushing my teeth and answering my phone were strategised rather than done. I refused to explore my options outside of using crutches and moving became a mammoth task. I was almost always sweating, exhausted or narky, somehow mistaking stubbornness for determination.

I didn’t wear make-up, because it would slip right off with the sweat, and I had to wear my hair up in a ponytail to limit “heat patches” in my body.

This is how I used to think.

I was up against everything; even my hair.

The distances I could walk shortened at such a frightening pace that it felt like I was being stripped of my youth. I used to be able to walk all over town, taking the occasional breather, but now I couldn’t even walk from my car to the front door without my parents helping me.

I made many sobbing phone calls to them during this time, lost for words and lost for breath because I was just wasn’t able to do anything anymore. I was utterly heartbroken. I was broken. My identity was always based on my personal strength and I felt that if I started using a wheelchair, I was letting myself down.

I never thought that it could give me back those lost years.

I’ve been using a wheelchair for seven years now and it’s only now that I know what freedom really means. In many ways I’m still recovering from my last years of using crutches. When my phone rings, my body still goes into panic mode remembering what it took to answer my phone on a pair of crutches without falling over.

I’ve also gained time by using the wheelchair. Minutes aren’t lost trying to find my balance and catch my breath because I can just get on with things now. While I’m still fighting for improved access and equality for disabled people, I’ve created a new identity for myself.

I’m stronger now and if I’m struggling, I’ve found ways to reach out. I have pride in my ever-evolving disability, something I never had when I was younger.

I just wish that I had given myself a break earlier on.