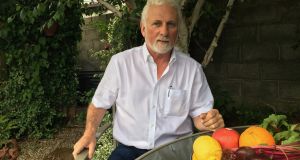 Ciarán Lawless gave up his full-time job to concentrate on reversing liver disease with a strict diet and exercise regime.

They call it a silent epidemic, and awareness of the risks of fatty liver have only become apparent very recently. Liver disease is regularly associated with excessive alcohol use, but knowledge of Non-Alcoholic Fatty Liver Disease (NAFLD) is relatively less known. If undiagnosed and untreated, it may ultimately lead to cirrhosis of the liver.

Those with type 2 diabetes, obesity/high BMI, a high intake of fat and sugar (the ‘Western diet’) and/or high cholesterol have a greater risk of developing NAFLD, but awareness among patients and medics is extremely low, so there’s underdiagnosis, under-treatment and increased mortality.

Prof Suzanne Norris, consultant hepatologist at St James’s Hospital and Liver Wellness, is trying to raise awareness of the risks of fatty liver. “It has really only come to fore in the past 10 years, and in the past two years NAFLD is the most common disease in western countries.” In the past year, says Norris, it is the most common indicator for liver transplantation for cirrhosis and liver cancer in the US.

And yet people may have liver disease without realising it. Last November, Prof Norris and Diabetes Ireland offered liver screening to patients with type 2 diabetes. Of 48 who were scanned, 10 people – that’s one in five – had advanced fibrosis/cirrhosis of the liver. Of those 10, eight had normal liver function tests, nine were light or non-drinkers, five had at least one feature of metabolic syndrome, and all 10 had severe fatty liver infiltration.

With Ireland set to become the most overweight nation in Europe by 2025, NAFLD in Ireland is likely to increase significantly.

How do you gauge how prevalent the silent epidemic may be? There is no liver population base study of fatty liver in Ireland, so researchers extrapolate from Tilda [The Irish Longitudinal Study on Ageing] and look at other countries, where 30 per cent of the general population is at risk for NAFLD, says Norris.

Also, 70 per cent of people with type 2 diabetes internationally have fatty liver. “It would be no different here. Most people are unaware of it.” Some 90 per cent of the 225,000 people in Ireland who have diabetes are type 2.

The majority with NAFLD may have no problem but 20-25 per cent will go on to develop Non-Alcoholic Steato-Hepatitis (NASH), which is inflammation and cellular damage in response to the liver fat. Those patients are at highest risk of cirrhosis.

“We are trying to get the message out to other medical specialities, particularly those who treat people with diabetes, because awareness of NAFLD is low, and complications are potentially very serious.”

There is no FDA-approved drug available to treat NASH (though there are currently 60 international clinical trials), so lifestyle modification and weight-loss are the only option.

“What worries me,” says Norris, “is seeing people with a diagnosis of fatty liver cirrhosis, who, if they had been advised five years ago to lose weight, could have offset this risk. Research shows losing 7-10 per cent of body weight leads to a major improvement in liver fat, inflammation and liver scarring. Anecdotally I have seen people reverse early cirrhosis with weight-loss.”

‘I put my life on pause, but you can reverse this’

Ciarán Lawless acknowledges he is a bit of a poster boy for managing NAFLD. He is fully engaged with his health – luckily for him. The marine consultant, living in Dublin, was just a moderate drinker but had type 2 diabetes, which he managed well for 15 years, with medication and attending clinics. For about 10 years his bloods showed anomalies (outside the normal range) in liver function, Whenever he enquired, he was assured it was common among diabetic patients, and not a concern.

Despite this, he was uneasy. After reading about liver research by Prof Suzanne Norris, he wrote, asking her to take a look. He had tests, and ultimately a biopsy in 2013. It took months to get the biopsy results, by which time he was working in Glasgow (where he did tests before joining BUPA, which showed up nothing untoward). So in early summer 2014, a call from his GP with a NASH diagnosis was “a complete shock”.

Lawless went into action, researching widely. He gave up his full-time job and came home to concentrate on getting better. He realised he could reverse his dangerous condition, and worked closely with Prof Norris and dietician Orla Walsh.

“At the end of day there is no treatment for it, but you can reverse it: it is possible to go from serious to within normal range. The liver has great powers of regeneration.” He concentrated on diet and exercise and “I eliminated anything I could, including medications, that might be liver toxic or difficult for the liver to manage”. That included “everything pharmaceutical, even paracetamol”. And he ditched his diabetes meds.

“I put life on pause to deal with it. It worked – although maybe you can do this in simpler ways,” he observes.

His regime was strict. He ate lots of liver-friendly veg – beetroot, spinach, broccoli – as well as nuts, poached chicken and oily fish, fruit, vegetable and fruit juices. Much of what he ate was raw or involved little cooking. “No fast food, and nothing from a packet.”

He cut out fats like butter and cheese, breads, pasta and spuds (“I’m not sure why, but it probably helped with the diabetes”), most red meat, eggs for much of the time. “No alcohol. But caffeine is a plus, coffee is good for the liver. Thank God for that.”

Lawless paired this with a strict exercise regime – weights at the gym, and running 10km daily. He was unfit when he started “after three-four minutes on treadmill I would be panting, but over time and pushing myself I got up to 10km a day.”

He did this for six months.

His diabetes symptoms disappeared immediately. Within a year he saw positive effects in liver tests. He reckons they went from their highest level to normal in 18 months. These days, the fat content on his liver zig-zags a bit, he says, but his scans are good and he is confident he has repaired his liver health.

These days he eats fairly normally – pasta, red meat, some cheese, but has lost the taste for butter – and walks a lot. Four years on, he is still off the diabetes meds, although “my liver is a healthier organ now, and could tolerate them”.

Lawless’s experience showed him “you can reverse this thing quickly”.

“I was ruthless about it.”

– Non-Alcoholic Fatty Liver Disease is an excess of fat on the liver in the absence of high alcohol intake. Risk factors for NAFLD include type 2 diabetes, high blood pressure, high cholesterol and being overweight/obese. About a fifth of patients with NAFLD/fatty liver will develop fat-related inflammation of the liver – Non-Alcoholic Steato-Hepatitis (NASH), which can lead to liver damage and scarring (fibrosis) and cirrhosis.

– NAFLD often displays no symptoms. Liver function tests do not reassure that there is no liver damage or scarring.

– Diabetes type 2 patients should be assessed for NAFLD (by specialised blood tests at GPs or scan), irrespective of liver enzyme blood tests, as they do not reassure that there is no liver damage or scarring. FibroScan (vibration controlled transient elastography) testing is non-invasive and available in the seven hepatology liver units in public hospitals.

We’ve discovered our bathroom has no foundations. What should we do?
10