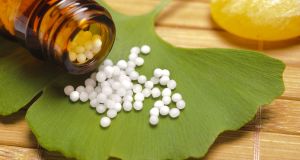 Is it ethical for pharmacies to sell unproven products, given the important role they play in the country’s medical system? Photograph: iStock

The pharmacy, as we know it, has changed beyond recognition in recent years. Twenty years ago, glucose sticks were about as exotic as it got in terms of what the average pharmacy stocked alongside paracetamol, cough bottles and indigestion remedies.

Today, consumers can pick up cosmetics, gadgets and any number of skincare products in places that aren’t just pharmacies, but full-service lifestyle stores.

However, in many pharmacies, they can also find things such as homeopathic pills, “detox” foot patches and a range of other unproven products – and that, some observers say, flies in the face of the important role of pharmacists in the community.

“When you walk into a pharmacy you expect to meet people who are well versed in evidence-based medicine and are well trained,” says Dr David Robert Grimes, cancer researcher, physicist and author of a recently published book on critical thinking, The Irrational Ape. “But there is a disconnect between the fact that they will sell you well-proven remedies on the one hand, and what is essentially snake oil on the other.”

Is it ethical for pharmacies to sell these products, given the important role they play in the country’s medical system? Or is it a case of caveat emptor – is the onus on the consumer to educate themselves about the effectiveness of the products they are buying in an attempt to support their health?

We put these questions to the Pharmaceutical Society of Ireland, the regulatory body for pharmacists in the State. In response, it said it expected all information and services provided by pharmacists to be “accurate, clinically valid and in line with current evidence and best practice”.

In a statement, the society said: “A code of conduct for pharmacists provides a principles-based approach on the standards and ethics expected of pharmacists in Ireland. Principle one refers to the requirement for an evidence-based approach to provision of care, and acknowledges that where the supply of services or products from the pharmacy is without a comprehensive evidence base, the pharmacist must satisfy themselves that the needs of the patient are being best met by the approach.”

That response is “a total cop-out”, says Grimes. “It’s not in the patient’s best interests to be implicitly misled.”

There is, he adds, “a deliberate ambiguity” in stocking alternative remedies next to conventional ones. “If a member of the public walks into a pharmacy and sees these products being sold, it gives them a perception that they must work, but they don’t. These homeopathic and alternative products gain an aura or veneer of legitimacy through proximity that they don’t deserve,” he says.

“There are obviously financial motives for selling this stuff, and pharmacists may even feel that their customers want them, so why not stock them? But it’s my personal conviction that a pharmacist should have a more central role in promoting evidence-based medicine. By extolling the supposed virtues of these remedies – virtues which don’t exist – they muddy the waters for the public.”

Grimes says the issue forms part of “a bigger battle” being fought in the global consciousness over the role of experts in medicine.

“Scientists, doctors and those at the coal face of evidence-based medicine, and I’d include pharmacists in that, have a serious role to play in combating misinformation, pseudoscience and disinformation. We are currently looking at a global rise of vaccine-preventable illnesses caused by a rise of disinformation online and the promotion of fake cures,” he says.

“There is something galling about the fact that while we’re in the middle of this crisis, some of our most trusted members of the medical establishment are essentially pushing useless products because it’s good for their pockets.”

If someone is selling you an expensive placebo, I don’t think that’s very ethical

The medical professionals who sell these products – which he describes as being “diametrically opposed to everything we know about science and medicine” – are sending a very curious message, Grimes believes.

“Can you imagine going to a doctor who took the same attitude? You present with symptoms and instead of prescribing an effective drug, they instead decided to sell you snake oil, knowing full well it doesn’t work. There would be outrage, and for good reason,” he says.

“From the perspective of efficacy, if you are paying for a product, the very least you should expect is for that product to be effective for the reason you’re taking it. If someone is selling you an expensive placebo, I don’t think that’s very ethical.”

Given the revenue generated by these products, however, they are unlikely to disappear from pharmacy shelves any time soon. The global complementary and alternative medicine market is expected to be worth nearly $197 billion (€161 billion) by 2025, while the market for homeopathic products alone is predicted to hit just under $16 billion (€13 billion) by the end of 2024.

That’s something to keep in mind when you’re browsing the shelves of your local pharmacy, and a very good reason to always ask exactly what evidence there is that your chosen product works before you hand over your cash.