Period poverty: ‘It’s important products are readily accessible at no cost like toilet roll or soap’ 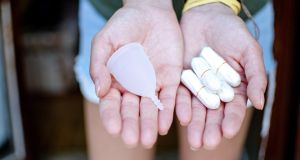 The recent passing of a Bill in the Scottish parliament to bring in the legal right to free access to sanitary products has brought sharp focus to the issue of period poverty.

Monica Lennon, the health spokeswoman for the Scottish Labour Party, who brought forward the Bill, said that it was just the first step in ending the “stigma of menstruation” in Scottish society. The Sanitary Products (Free Provision) (Scotland) Bill which is estimated to cost £9.7 million (€10.7 million) a year, also includes menstrual education for all pupils.

New Zealand is another country that has begun introducing free sanitary products to schoolgirls. In June 2020, the New Zealand prime minister Jacinda Ardern said that “too many girls were skipping school because they weren’t able to afford pads and tampons”. Schools in deprived areas reported girls using toilet paper, newspaper and rags to manage their periods. And a study by Otago University in Dunedin, New Zealand found that girls who experience period poverty face lifelong implications for their health, emotional development and career prospects.

A Plan International study on young females in Ireland found that almost 50 per cent of girls aged between 12 and 19 found it difficult to pay for sanitary products. One in 10 of those surveyed said they were forced to use a “less suitable sanitary product” because of the high monthly cost involved. Some girls here also skip days of school during their periods for fear of blood leaking through their clothes.

Period poverty – loosely defined as not being able to afford to buy adequate supplies of sanitary products – has also been raised as an issue by Irish politicians.

In March 2019, the Irish Women’s Parliament Caucus called on the Irish Government to provide a range of free, adequate, safe and suitable sanitary products in schools, universities, hospitals, refuges, homeless services, detention centres and Garda stations. The group of Irish female politicians also called for objective menstrual education information to be available in all public buildings.

“Access to affordable sanitary products and menstrual education should be viewed in a human rights context, as according to the World Health Organisation’s constitution,” said the Green Party TD Catherine Martin when co-presenting the Seanad motion.

Following on from the Oireachtas Women’s Caucus motion, the National Strategy for Women and Girls (NSWG) established a sub-committee on period poverty, chaired by the Department of Health. Its report on the extent of period poverty and those most at risk is due for publication soon. The Fianna Fáil/Fine Gael/Green parties’ Programme for Government 2020 has also committed to providing a range of free, adequate, safe and suitable period products in all publically funded educational settings in Ireland.

The National Women’s Council (NWC) was a member of the NSWG sub-committee on period poverty. Jennifer McCarthy Flynn, head of policy at the NWC says that the women and girls most at risk of period poverty include out-of-school girls, those in hospital, women experiencing domestic violence, lone mothers and their teenage daughters and women in direct provision.

“Our aim is to ensure that period products are free for those at risk of period poverty and available in schools, colleges, hospitals and public buildings. We also must tackle the high cost of period products generally and address period stigma. Stigma around menstruation is a barrier to good health and gender equality.”

It has been estimated that Irish women and girls spend an average of €132 every year on tampons and sanitary towels. And while some cheaper period products are available in discount stores, they are often of an inferior quality. The NWC is also calling for improved education about menstrual health and campaigns that aim to dismantle menstrual taboos in the wider community.

The day after Scotland’s decision to legislate for free access to sanitary products, Sinn Féin Senator Lynn Boylan raised the issue again in the Seanad. “Period poverty is very real and addressing it is about addressing the wider issue of poverty and deprivation we have in this country,” Boylan said.

“Nobody bats an eyelid when they see toilet paper provided in toilets. In fact, they are quick to point out its absence. Periods are a normal bodily function and it’s seen as shameful and something that should be hidden away,” she said.

Claire Hunt who runs Homeless Period Ireland says that the label “period poverty” might put people off but there is a need for free sanitary products. “My goal is that it [period poverty] doesn’t exist but I see it first hand from women who need products and the organisations who get in touch with me,” says Hunt.

Homeless Period Ireland collects donations of free sanitary products from a number of drop-off points throughout Ireland and distributes them via volunteer drivers to homeless shelters, direct provision centres and food banks. The smartphone app Easho was used as a direct order system during the Covid-19 pandemic.

Some local authorities and sports clubs have already moved to address the issue of period poverty. From January 2019, Dublin City Council (DCC) has provided small baskets of free period products in four sports and recreation centres – Darndale Recreation Centre, Donore Youth and Community Centre, Bluebell Youth and Community Centre and St Laurence O’Toole Recreation Centre – on a pilot basis. A spokesperson for DCC said that it is anticipated that free period products will be made available in more public buildings post-Covid.

Some League of Ireland soccer clubs have also put free period products in their stadia. Speaking to The Irish Times in July, Daniel Lambert, marketing director of Bohemians said the club works on many social issues to make sports as inclusive as possible. “There shouldn’t be any barriers to accessing sport and this is an important step in that process,” said Lambert who credited Hunt’s Homeless Period Ireland for highlighting the issue.

“Comfort is key when it comes to periods. Studies have shown that girls tend to drop out of sport when they reach puberty and this is often because of embarrassment and in some cases, they simply don’t have access to products,” says Hunt. “It’s important that these products are readily accessible at no cost like toilet roll or soap.”