Surviving a brain tumour: ‘I felt like a stranger in my own life’ 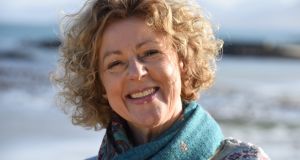 Rachel Gotto’s first experience of trauma was when she lost her beloved brother to cancer when he was just 28 years old.

“We were very close in age and shared everything,” she says. “Dominic was vibrant, clever, funny and brave, and his passion for the sea saw him become a delivery skipper – bringing boats across the Atlantic for clients. He was my companion and my closest buddy as a child, and, when he became ill, I quite literally gave up everything to try and help him regain his health.”

But despite travelling the world to try and find a cure for his cancer, her brother died in 1996 and she felt as though she had lost a part of herself.

However, after meeting Nic, her husband-to-be, she felt as though there may be some hope for the future. “He was gentle, kind, smart and a wonderfully interesting man,” she says. “Our relationship progressed quite quickly, and his unwavering support helped me to cope with my deep loss. We married a year after Dominic died and I got pregnant with Nicola. We were overjoyed and life began to have a little colour in it again.”

However, tragedy would strike again as when she was six months pregnant, Nic died in a scuba diving accident and Rachel’s life began to spiral out of control. “I was onboard the boat when the accident happened and was completely traumatised; in fact, I believe I was in shock for years,” she says.

“These days, I would be diagnosed with PTSD and poor Nicola was born a traumatised little baby. We know a lot more now about trauma in-utero today, but she was fractious, startled, upset and never slept. I was exhausted, shocked, unable to sleep, numb, devastated, you name it I felt it – life was terribly hard, day and night, but I just had to keep going.

“Nicola had a bad birth mark on one of her eyes which needed treatment and I was constantly travelling to and from Dublin to various specialists, but, eventually, she lost the sight in that eye, which was difficult to deal with. I coped the only way I knew which was to keep carrying on, just putting one foot in front of the other.

“I had a lot of support from family and friends, but I had to live with my losses and took all of my resources just to be able to manage that. But I had another monumental blow when Nicola was five and I was diagnosed with an inoperable benign brain tumour.

“I had been having strange symptoms like being confused about which side to drive on, forgetting how to move the gear stick, and losing the use of my legs at night. They were bizarre symptoms which I totally ignored, because I was still reeling from all that had happened. I put it down to exhaustion and loss, but one day I was found unconscious and was rushed to hospital where I was diagnosed with a grade 6 AVM (arterial venous malformation). I was told I had an incredibly serious condition, and, because of the location of the tumour, there was nothing much that could be done for me.

“It took me quite some time to fully understand – as denial being what it is, I hardly believed my diagnosis. I was desperately ill, and it looked like I hadn’t long to live. I was reeling, and all I thought about was Nicola, and how, somehow, I had to be there for her.”

Despite the appalling diagnosis, Rachel refused to give up and after extensive research found a surgeon in the UK who was willing to operate on her, but she was told that this could mean that she would be left with paralysis.

She decided to take that risk and after a 14-hour operation, she recovered but was indeed paralysed on the left side of her body.

“I had already lost so much in life, and now had to deal with losing my physical freedom – I really felt as if life had betrayed me,” she admits. “I was emotionally floored for a time, but it wasn’t long before I began looking for solutions and was eventually transferred to a brain rehabilitation unit, where I worked so hard to get better. I did everything for myself and got stronger and stronger until I eventually began to get some movement back and learned to walk again – although it took years for my arm to move.

“I had lost so much at that point that I hardly knew who I was – I felt like a stranger in my own life. I had to take so much medication to tame the intractable seizures (following the surgery) and other physical and mental pain and this took a major toll on my already battered emotional state. The anti-epilepsy drugs (AEDs) meant I could live a ‘fairly normal life’, having experienced up to seven seizures a day, often remaining conscious in the seizure, so it quite literally felt like I was being electrocuted.

We use distraction, addictive behaviour, procrastination and excuses; ignoring what is a basic human condition that no one should feel any shame or guilt around

“I was appearing functional on the outside, but the reality was that I was suffering terrible depressive episodes, huge anxiety, rage attacks, agoraphobia, I was cognitively challenged, impulsive and not really present at all – and all this with a daughter to look after. Eventually, on my quest for answers, I consulted another neurologist and found out that one of the medications I was taking, a Benzodiazepine, had made me an accidental addict. And after one horrific attempt at going cold turkey, I began a safe and slow withdrawal programme which took about two-and-a-half years. It was absolute hell.”

The now 51-year-old, who lives with her partner Malcolm in Galway, says she had many side-effects as she tried to loosen her dependence on medication, including paranoia, agoraphobia, rage, suicide ideation and countless physical symptoms. “All in all, it was a walk-through hell, and I would rather go through all my past traumas again, rather than undertake benzodiazepine withdrawal another time,” she says.

“Eventually, with much fortitude and determination I safely managed to withdraw from all the other prescribed medications I was on. It took a few years, but I did it and, today, I am completely medication free and am epilepsy free. I can drive a car and almost fully recovered physically and mentally. I enjoy life in a way I never thought possible and every day is a blessing.

“People regularly remark that they wouldn’t have had the strength and the tenacity to keep going like I did, and I always reply that if I can do it, then anyone can.”

Rachel says her story highlights the sheer determination and power we all have the capacity to achieve and she believes that it is so important for people to talk about their struggles as being open with herself and those around is what helped her through her extraordinary ordeal.

“We humans are amazingly strong and have innate strengths and resources within us that will bring us through pretty much anything – but we have to work at it,” she says. “Many people struggle with mental health issues, confidence, stress, burnout, disappointment and fears and still, we are not a nation that can openly acknowledge this and accept it as part and parcel of life that we can, and must, address. We use distraction, addictive behaviour, procrastination and excuses; ignoring what is a basic human condition that no one should feel any shame or guilt around.

“There was a time when I didn’t have a way out, when it looked like there was no solution, and I had to find my own way through multiple traumatic experiences to survive both physically and emotionally,” says the motivational speaker, life coach, mentor and clinical hypnotherapist. “I’ve distilled these strategies and tools into actionable take-homes, and I now work with groups and individuals to change how they view their challenges. I teach how to unearth and connect with the tenacity, skills and personal resources people have already learnt, but are not fully conscious of.

“My memoir will be published in the autumn of 2021 and, like my work with individuals, groups and organisations, it uses my experiences to illustrate what is possible.

“I believe that using absolute power of the mind, we can harness for good and for purpose, rather than letting our mind hold us back. I know this to be true because, somehow, I mastered it, and that means anyone can.”