‘I have to face the financial shock of becoming a mother’

As my bank balance races to zero, a thought sat in my stomach like a brick: how can I afford to bring a baby into all this 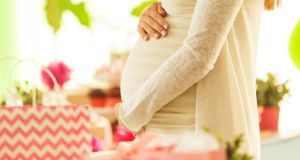 “Some of my friends think I’m crazy for not wanting a shower and baby register. ‘You’re only going to end up with hundreds of babygros and none of what you really need,’ warned one.”

My accountant is rarely the bringer of good news, and this week was no exception. When he mentioned one figure in particular, I thought he was casually referring to the GDP of a small, solvent country, such as Monaco or the Vatican.

Instead, he was talking about this year’s tax bill. Not for a nation, but for me.

Bye-bye, rainy-day fund. See ya, savings. Farewell, emergency stash. And, worst of all, sayonara ‘splurge on shower gel & Other Stories’ money. I came off the phone whitened of knuckle, hoarse of throat and dark of outlook. And, as my bank balance began its race to zero, a thought sat in my stomach like a brick of cold sick: “Just what, exactly, do you think you’re doing, bringing a baby into all this?”

Where would the money come from for prams and nappies?

I get it: few people in Ireland are where they thought they would be at this stage, financially at least. Most decent, hardworking and fiscally mindful folks are on the back foot, and several are much worse off. Yet, in that moment, two months away from becoming a mother and having a dependant, I felt irresponsible. Selfish. Filled to the brim with anxiety and dread. Where would the money come for prams and nappies?

Or the funds needed to take a few weeks’ or months’ maternity leave?

The State maternity benefit is €240 a week: better, admittedly, than a kick in the jaw, but in a city where the average monthly rent is €1,587, it doesn’t leave much change for babygros.

When faced with a financial shock as a single and child-free woman, it’s a question of hunkering down for a while until conditions improve. Plamásing Peter to pay Paul. Sticking the Aldi shop on another credit card. Staying out of the pub for a bit. Or, if you’re a freelance writer like me, putting in a few weekends at the pumps and pitching/scribbling away until conditions improve.

But baby-raising is an expensive business; more so when your earning power is considerably diminished by care-giving. B and I are both freelances, and the thought of 18 years of financial uncertainty makes me need a lie-down.

In a taxi earlier this week, I told the driver that the average cost of raising an Irish child to the age of 21 was about €105,321 (I’d been furiously Googling “how to raise a non-materialistic child”). “Sure I’m spending that on the 15-year-old for Christmas,” he answered, sounding only a little battle-weary. “She wants the iPhone X and a trip to New York.”

To which the only decent response is, well, all the question marks in the world.

Aside from ignoring the impetus to spend, spend, spend, there are ways of slashing the price tag of new motherhood. Charity shops and baby markets, I am told, are a godsend. One friend has donated her cot to me; another a buggy and high chair (I am told by the powers that be online that the only big-ticket item that’s advisable to buy brand new is a car seat). Others have sterilisers, bibs and snow suits gathering dust in their houses and are only too happy to declutter and see them put to use.

But soon, the question looms into view. To baby shower or not to baby shower? I’ve long groused about the very existence of ‘rituals’ such as bridal showers, hen parties and baby showers. The latest, I am told, is the ‘honeymoon party’, exported from the United States and arranged so that wedding guests can buy a gift for the couple’s honeymoon. So you can add ‘flip-flops and a vajazzle’ to the some €800 that it already costs to be a wedding guest.

Gussied up as a celebration of a life milestone or ‘to welcome a baby into the world’, showers sometimes feel like little more than a means to shake people down for gifts (or money) on the basis that you’ve simply made a specific life choice. Women who finish their PhD, start a business or write a book don’t get handed all the ephemera they need to get on with their new life. Why should brides and pregnant women be celebrated like deities with nappies full of chocolate mousse, sashes and gifts galore? No wonder we sometimes think of marriage and babies as some kind of meritocracy.

On a certain online mum-to-be forum, populated mainly by American women, posters regularly complain because their friends haven’t bought them enough presents from their extensive baby registry. Many of them have already had a huge ‘gender reveal’ shindig, but sure who’s counting?

“It’s my fourth baby, so we’re calling it a baby sprinkle instead (wink emoji),” writes one. “My cousin announced her pregnancy at my shower,” complained another. “Doesn’t she know it’s my time to shine LOL.”

The baby shower has, from what I can gather, been Kardashianised to the hilt. As one friend observed, it’s the third part to the Sweet 16 party and the bridezilla moment; another opportunity to shout: “Look at me!”

Some of my friends think I’m crazy for not wanting a shower and baby register. “You’re only going to end up with hundreds of babygros and none of what you really need,” warned one. Another friend is having none of my protestations and wants to organise a low-key afternoon tea “with only a couple of balloons”.

Admittedly, I do like the idea of gathering pals together for an unhurried meet-up together: something tells me my days of languorous afternoon teas are numbered.

Ultimately, though, it will be our responsibility to provide what’s needed for this baby. I’ll have to remind myself to wind my neck in and remember that this baby doesn’t need half of what we’re led to think it does.

Perhaps it’s the time of year where frantic consumerism is like fluoride in tap water, but it’s hard not to get caught up in the Frenzy of Getting Baby Stuff. It’s the instinct to provide, or to be the best parent possible, gone rogue. But try walking through Mamas and Papas and resist the siren song of soft blankets, teddies and carry-cots. Even B, the frugal and sensible yin to my fairly flaithulach yang, lingered on a unicorn-shaped night light for longer than necessary. We know it deep down: having lots of cute clothes, ‘stimulating’ toys and life-hack gizmos won’t make us better parents.

Though I suppose knocking the fancy shower gel splurges on the head is as good a place to start as any.

Tanya Sweeney’s pregnancy series
Part 1: More chance of Bosco getting pregnant
Part 2: First came the shock, then the advice
Part 3: I’m pregnant and have a glass of wine
Part 4: People have never seen me like this
Part 5: Baby bump makes a woman so visible
Part 6: No more well-meaning advice
Part 7: Facing the financial shock
Part 8: My last child-free Christmas