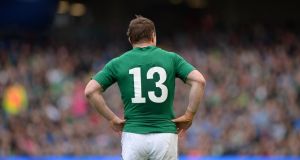 Brian O’Driscoll, during his 140th International Test game against Italy at the Aviva Stadium in 2014. Photograph; Dara Mac Dónaill

An Irish doctor has said the former Ireland rugby captain Brian O’Driscoll’s revelations about taking prescription medicines before playing matches shines a light on a problem faced by many GPs.

“There is a group of elite ultra-competitive sports people who aren’t interested in the lower-rung treatments for injuries, such as rest/ice and elevation or even paracetemol and anti-inflammatory gels,” said Dr O’Shea. He said doctors feel under significant pressure to keep these players categorised as fit to compete, or to accelerate their recovery. A recent International Rugby Player’s survey found 45 per cent of players feel pressurised by coaches and staff to play when injured.

On Newstalk’s Off the Ball programme this week, O’Driscoll spoke about how he regularly took pain-relieving prescription drugs, Difene and co-codamol, before playing matches in the last couple of seasons before he retired from rugby in 2014. O’Driscoll said he also took valium to help him sleep, and to counteract caffeine tablets he took just before playing.

The risks of taking “upper rung” analgesics (pain killers) to support high-level performance are significant. “The side effects of long-term use of these non-steroidal, anti-inflammatory drugs are kidney damage and inflammation of the lining of the stomach which can lead to ulcers or bleeding,” said Dr O’Shea.

A 2010 study on the use of anti-inflammatory drugs for athletes advised against their long-term use for muscle injuries, bone fractures or chronic tendon problems. The Swiss researchers said the long-term use of non-steroidal anti-inflammatory drugs may impact negatively on the body’s long term healing processes. The authors in the Annals of Physical and Rehabilitative Medicine asked: “Can we justify masking the painful symptoms of athletes to allow them the shortest possible time away from their sport, perhaps at the detriment of their tissue healing in the medium term and their functional recuperation in the long term?”

O’Driscoll said he hasn’t felt any adverse effects. “Ask me at 75 and see what the state of my insides are like. I didn’t take so many Difene that I’m concerned about it, but there would be players out there taking them every single day and that can’t be good for you.”

According to Dr O’Shea, there are other groups in society at risk of over-use of powerful synthetic opiates for pain relief. “Pressurised middle-aged people with old sports injuries can develop an opiate addiction,” he said.

“Pain gets worse when you are fatigued and exhausted and while we are a decade or two away from the opiate addiction that is happening in the United States, we don’t want to get there. For that reason alone, it’s important to talk about these issues now.”