The ethical considerations of face transplants 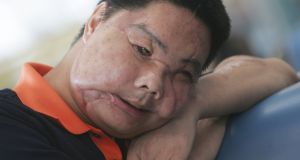 Li Guoxing, whose face was disfigured by a bear, received the world’s second face transplant in China in 2006. Photograph: China Photos/Getty Images

When it comes to talking, eating, seeing, smelling, expressing emotion and allowing others to infer our age and ethnicity, we all need a face. But what if disease or trauma deprive us of our most defining feature?

Surgical advances make face transplantation a feasible option for some patients, but as often occurs in the wake of technological progress, ethical considerations can arise.

When a Royal College of Surgeons of England (RCSE) working party reviewed the topic in 2003 it acknowledged facial transplantation as a “possible future treatment”, but considered the risk-benefit ratio to be unacceptable and that patient autonomy could not overrule the obligation for patient protection.

Then, on November 27th, 2005, in Amiens, France, 36-year-old Isabelle Dinoire underwent the world’s first face transplant, following mutilation by a dog. And, in April, 2006, in China, the second face transplant was carried out on a 30-year-old male following a bear attack. By that November the RCSE working party had detected a swing towards favouring the moral argument that “some desperate though competent patients should be allowed to consent to facial transplantation despite the great risks”.

The fact of this swing invites the inference that one’s outlook is not solely determined by intellectual rigour, but can be swayed by the prevailing moral climate, which in turn may influence the medical zeitgeist. As the late philosopher Mary Midgley observed: “Views about facts never stand alone. They are always shaped by background world pictures... and these world pictures are themselves not value-free.”

According to a 2018 review in the journal Transplant International, a total of 35 face transplants have been reported worldwide, of whom five recipients have died, giving a patient survival rate of 86 per cent.

So where does face transplantation sit in relation to what are now considered routine procedures, such as kidney and liver transplants? Mr Cormac Joyce, consultant plastic surgeon at St Vincent’s Hospital, Dublin told The Irish Times that most face transplants to date have arisen from major facial trauma. “But in the future,” he adds, “this will probably expand to congenital anomalies and post-cancer resections. With fewer than 50 full or partial face transplants carried out worldwide, the procedure is in its infancy. The main points of contention around facial transplantation are ethical, and this is reflected in the fact that most of the related medical literature addresses ethical considerations rather than surgical technique. In fact, the microsurgical techniques used in facial transplant surgery are commonplace in plastic surgery theatres.”

In 2007, an article in the Journal of Medical Ethics argued against facial transplantation from three perspectives: the recipient; the donor and donor’s family; and the community of people with disfigurements. The authors suggest that for a non-life-saving operation there are underestimated risks associated with infection, malignancy, end-organ toxicity, diabetes, kidney disease and a range of psychological considerations, such as the question of identity.

They discuss donors’ motivations, donor anonymity and the possibility that donors’ families could recognise donor faces and might wish to contact the recipient. The issue of identity is also raised, and in a wider context the authors speculate that the fact of facial transplantation suggests that “a good quality of life cannot be achieved by people with disfiguring conditions”.

Yet it could be argued that a patient’s identity is already undermined by their disfigurement, giving them a new – albeit disfigured – identity. In which case a face transplant might seem an attractive prospect to a potential recipient.

But as Mr Joyce points out, face transplantation is not without hazard: “The main ethical consideration is that facial transplantation is life-improving surgery, not life-saving surgery such as liver transplantation. Immunosuppressive drugs can have devastating consequences leading to shortened life expectancy and some cancers. Patient selection is therefore a complex process involving a multi-disciplinary team with thorough psychological input and support for the recipient and donor families.”

An encouraging report published this year in the Journal of Family Therapy investigated long-term psychosocial outcomes from the point of view of one patient and his partner’s perspective. It found that four years post-transplant the psychological health of patient and partner was good; marital and family life remained stable; and that “face transplantation may strengthen the resilience of the patient and the partner”.

However, Mr Joyce makes a cautionary point, and sees interesting parallels with hand transplantation: “One of the first hand transplants in the 1990s was rejected because the patient refused to continue taking immunosuppressants as he was unable to deal, psychologically, with a donor hand. There have also been concerns in the United States recently about donor families meeting the transplant recipients and whether this is appropriate or not.”

So when might we see the first Irish face transplant? “Ireland has a small population,” says Mr Joyce, “and we’re some way off establishing a facial transplantation service. The very few patients who could possibly benefit are typically referred to international centres for consideration. I think in Ireland we’ll see hand transplantation before face transplantation. They have many similarities, not just in terms of immunology, but there are ethical and psychosocial comparisons.”

Although Mr Joyce considers the establishment of either a hand or face transplant service in Ireland to be some way off, “we will likely follow the English model. The UK has just started to carry out hand transplants and we’ll be keeping a close eye on how their service is delivered over time.”