For young patients at Our Lady’s in Crumlin, the hospital’s play specialists are crucially important in aiding recovery 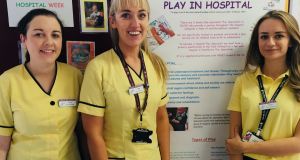 When adults become acutely ill, healthcare professionals and family alike focus on their specific medical needs in the belief that the treatment regime trumps all other needs.

However, when a child becomes acutely ill, it is almost the opposite. Family and healthcare professionals realise that keeping life as normal as possible, with time for fun and games, is crucially important.

This is perhaps nowhere more evident than in Ireland’s childhood cancer specialist treatment centre at Our Lady’s Children’s Hospital in Crumlin. The brightly painted corridors, colourful murals, play rooms, soft play garden and teenage chill-out space are carefully integrated into the clinical surroundings in St John’s Ward. And it quickly becomes obvious that the hospital’s three play specialists have just as important a role as the paediatric oncologists and haemotologists.

“The medical side – albeit important – is the lowest of priorities when it comes to supportive care,” says Dr Michael Capra, consultant oncologist at the hospital. “The nurses help bridge the medical and care practicalities at home but there are layers of other support – play therapy, music therapy, complementary therapies and psychology. Paediatric patients also have parents, siblings, grandparents, aunts and uncles who have to be maintained and fortified,” he adds.

Mary O’Rourke, senior social worker at Our Lady’s Children’s Hospital says it’s very important to be honest with children and their siblings about the treatment and its risks. “A cancer diagnosis in a child really is a very catastrophic event in every family. It turns their world upside down and forever changes their confidence in the world and [their belief]that their children will grow up healthy,” she says.

However, incredibly, O’Rourke says that when given love, support and help to process what they go through, the experience doesn’t have to be psychologically scarring. “Of course, parents fear that their child or siblings will have post-traumatic stress. And these children will be more mature and used to dealing with adults but our experience is when the appropriate help is given, sick children and their siblings can experience post-traumatic growth. Some of them will go on to become the most amazing junior doctors in the world.”

Play specialist Carol O’Connor says the three play specialists work through traumatic medical experiences with the children before treatment. For example, they use adapted dolls with real Hickman lines (called a Freddie in child cancer wards, these are the lines through which blood and chemotherapy drugs are administered) to role-play the experiences the children will go through. “I mimic the procedure, which helps children cope. I ask questions like, if the dolly was upset, what could they do and the children might say ‘read a book, watch something on their phone or breathe deeply’.” Clinical nurse specialists will use life-size dolls to instruct parents on how to change dressing or take bloods from their child.

Our Lady’s Hospital also has an MRI simulator which is used to familiarise children with the noise and shape of the real MRI scanner. Shaped like a rocket, the child lies on a table and is moved into position in the simulator. Since it was installed in 2016, the MRI simulator has halved the number of children who need to be sedated for MRI scans.

The children also get to partake in free play in the hospital playroom when they are well enough to be out of bed. “Patients choose what they want to play with. Sometimes, they will strike up conversations with other children while some will do arts and crafts on their own,” says O’Connor. The play specialists also work with children attending day treatment – doing everything from making buns to hosting tea parties.

Craft groups supply the hospital with “bravery” blankets, which are given to each child who attends the hospital

Craft groups supply the hospital with “bravery” blankets, which are given to each child who attends the hospital. Children are also given calico dolls (made by the Irish Countrywomen’s Association) that they can decorate, put gowns and name badges on. Children also can bring their own blankets and toys with them while staying in the hospital. And on very special days, clown doctors and Star Wars characters visit the children in St John’s Ward. “The children are in awe of these special visitors when they come in and walk around the wards,” says O’Connor. The key to all these activities is to help the children remain as children and not to be defined by their illness.

Beads of Courage is an extraordinary arts-in-medicine programme in which sick children are given beads to symbolically represent significant moments in their treatment. Over time, children build up a collection of beads that they can hold when they are scared, tell stories with when they are well again or simply play with when they are sick.

It sounds like a simple idea but the effects are profound. There are beads for every medical intervention (dressing change, tube or line placements, chemotherapy session), overnight hospital stay, care team visit or transfer to the paediatric intensive care unit. Some children build up thousands of beads during their illness. “One boy very proudly told me that his beads [when stretched out] ran from the front of his house to the back of his house,” says Mary Claire Rennick from the Childhood Cancer Foundation, which funds the Beads of Courage programme at Our Lady’s Children’s Hospital. The children keep a log of their beads in a daily bead journal so they can request new beads from the play specialist.

Majella Donaghey, mother of Jack Donaghey (7), who recently finished 3½ years of treatment for leukemia, says the Beads of Courage were a great support for Jack. “He loved taking them out, counting them and showing them to his grandparents and aunts. He explained to people what each bead was for as if to say ‘look at all I’ve been through and how brave I’ve been’.”

The Beads of Courage programme was founded by Jean Baruch, a cancer nurse in Tucson, Arizona, and is now administered in more than 170 hospitals in the United States and more than 100 hospitals in Britain. Beads of Courage are given to children coping with cancer, blood disorders, burn injuries, chronic illnesses and families who have an infant in a neonatal intensive-care unit.

The staff in St John’s Ward are full of praise for the programme. “It’s a tangible narrative of the children’s experience and a commemoration of their achievement,” says Dr Capra.

Rennick says “children sometimes bring the beads to school to explain to their classmates what happened. And some parents go back through the beads with their children who were too young to realise what they were going through at the time.” Rennick adds that parents who lose a child to cancer also get great solace from the beads, often putting them away and taking them out again to show siblings at a later stage.