Our disabled bodies are different, but no better or worse than others

Ferdia MacAonghusa: Male voices in internet’s murky corners are angry about ‘others’ 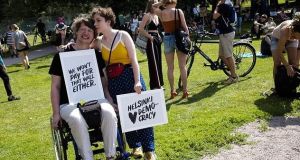 Ferdia at a rally against the policy of US president Donald Trump and Russian president Vladimir Putin in Helsinki in July. Photograph: Markus Schreiber/AP

If you drift into certain murkier corners of the internet (or, increasingly, real life), you will find a lot of men who are very angry about feminism and very worried about masculinity. You’ll find Daryush Valizadeh (he calls himself Roosh V and teaches young men how to manipulate people into sex) who believes we have to save Western civilisation by repealing women’s suffrage.

You’ll find Justin Barrett (making Ireland proud) advocating the death penalty for doctors who perform abortions. You’ll find Jordan Peterson (a YouTuber who nearly sold out the 3 Arena last month) calling women who don’t want to be sexually assaulted in the workplace hypocritical for wearing make-up. And everywhere, you’ll find a comment section full of men cheering them on in language so vile that it will be seared into your brain for weeks after seeing it.

While researching a piece on Peterson, Laurie Penny, one of the strongest and most lucid journalists in modern feminism, tweeted out a question directed at her white male followers. She asked us, especially those who are “anxious, lonely, heterosexual . . . [and] worried about their place in this weird world”, how, despite all of the demographic indicators, we hadn’t been pulled into this digital archipelago of resentment.

Obviously, I want to say that I could never be one of these men. I hope, and I want to believe, that no circumstances would ever draw me into their sphere. But really, is it possible to know that for certain? This new brand of sexism seems to be that most addictive kind of drug; one that answers all your questions, all your anxieties and all your fears with a single solution. And no one should look at an addict and refuse to see anything of themselves.

So, asking myself as honestly as I can, I’ve come to realise the role my disability has played in keeping me from falling down this particular rabbit hole.

These men don’t mention disability that often. Peterson produced one video on the subject of accommodations for students with disabilities. It featured more or less everything you’d expect; protestations that he does care about the disabled, lots of talk about “going too far” and the wonderful line “it’s very difficult not to be a villain when you start to complain about the accommodations of the [sic] disabled.” (He also talks, for quite a while, about Disney’s The Little Mermaid . . . )

But really, this is nothing compared to their deluge of similar and much worse content about women (and non-white people, as well as trans and non-binary folk but that is well beyond the scope of this column). I am clearly not targeted by these men.

But I would argue that the western patriarchal hierarchies that these men defend are not hierarchies of morality, meritocracy or mental ability. For example, Peterson’s response to much feminist discourse is to state that there are fundamental biological differences between women and men. No one disagrees with this, but using it as a refutation of feminism means that he isn’t talking about difference. He is justifying social inequalities biologically. The hierarchies these men are defending are hierarchies of body.

And any disabled person, if they are going to have an ounce of peace, has to learn that our bodies are different, they are able to do different things, but that they are neither better nor worse than the bodies of others. We have no choice but to stand up (or, sometimes, sit up) and tell the abled world that our bodies are equal to yours, despite what you think.

And after all of that, it is damn hard to listen to some dude on the internet telling you that people with women’s bodies are inferior and to believe a word of what he says.

Which is not to say that your toxic masculinity is scrubbed clean as soon as you become disabled (although maybe that’s what these men believe – if feminism=cancer does that mean that cancer=feminism?).

Personally, I still have many issues around emotional openness and I can slip into sexist complacency, a kind of feminist sin of omission. And of course, it’s not just my disability that’s helping me to move past this. I have a relationship with an amazing woman, possesing a very healthy lack of patience for masculine nonsense, who has taught me that vulnerability is a strength and that “getting on with it” (aka emotional repression) isn’t a viable solution to my problems. Not to mention that she, a much wiser person than I am, was vital in my learning that I am her and every other abled person’s equal.

Because despite what the internet says; despite our differences of gender, sexuality, race, culture, interpersonal skills, computer skills, juggling abilities, wealth, proficiency at board games etc; we are all of equal human value. And don’t trust anyone who tells you different.

Last couple in paradise: The Covid-19 honeymooners stranded in the Maldives
9

Irish woman in San Francisco: Life is quiet but everyone is exercising
10