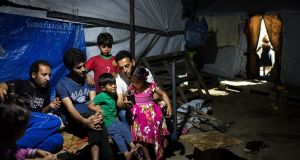 My role in Moria was as an Arabic-speaking cultural mediator, helping to facilitate communication between children and our health staff, and speaking to children about what they’d been through.

Part of my job was to work with a psychologist during psychotherapeutic sessions with children aged from eight to 17, who had symptoms of trauma after leaving their homes in Syria and Iraq. We ran activities that helped these children recognise the emotions they were feeling, and also help them cope with nightmares, bedwetting and any other signs of trauma and anxiety.

A really interesting part of the therapy process used storytelling to help children deal with their trauma. We split patients into groups and they worked together to create a book about one or two fictional characters who had gone on similar journies. We divided the book into chapters: before, during and after the war; the decision to leave their country; their journey to Greece and life in Moria. We also had sections about their experiences at MSF’s psychotherapy sessions and, finally, the “happy ending” and their hopes for life after they leave Moria.

Although the characters were fictional, the children projected their own experiences on to them. This proved to be really therapeutic and cathartic, as they could release all the pent-up feelings and experiences they would otherwise find hard to talk about. By the end of process, the character felt real. We read the stories out at a ceremony with the children’s families and friends. It was very emotional. Many parents were shocked their children had remembered so much about the war and their journey to Greece.

Telling these stories was very important for the children. They were finally able to express their feelings about what they had been through. Some of them were quite reluctant to talk to their families because they didn’t want to upset or put any further stress on them. These children are still living in the refugee camp and many of them feel it’s not really the right environment to share their thoughts.

One 17-year-old told us he felt a huge amount of sadness, but, as the oldest of his siblings, he thought he had to keep smiling and hide his feelings in front of his family. He said he was really grateful to have a safe space to talk, where he didn’t have to fear upsetting anyone.

It was important to him that there were no consequences for speaking freely. He said talking about his emotions helped him understand feelings he didn’t realise he had before. By the end of the therapeutic process, there were visible changes in his mood and demeanour. He was really into rap music and at the book ceremony he performed a rap about some of the racial and religious tensions in the camp. When we first met, he was quieter, more introverted and sad, so it was remarkable to see how far he’d come.

It was very common in the storytelling process for the children to share their memories of life under the Islamic State group in their respective cities. One 14-year-old boy told us he would walk around his neighbourhood and see heads placed on steel rods which had been dispersed throughout the town by the group. Another child, from Sinjar in Iraq, described the arrival of Islamic State, how they treated the Kurdish community and the atrocities they committed. It was very moving to help these children with their stories as it felt like we were writing history, told from a child’s perspective.

Children continually spoke about the sadness they felt because they were not able to say goodbye to their friends, families and classmates. So, in one of the stories we had the characters write a goodbye letter to all the people they had left behind. It was incredibly moving. When it was time to read it out at the ceremony, everyone was crying.

We spoke at length with the children about their dreams, aspirations and what they’re going to do after this experience is over. We’re not giving them false hope, but rather helping them to think about feelings that are already there.

Many of the children already have hope – they just need to hold on to it. One teenager explained it perfectly when he said, “Yes, I have lost six years, but I’m going to make it up. We all have a future ahead of us. We have dreams that we will pursue and I’m sure that most of the refugees here today have talents and aspirations that they will accomplish in the future.”

Parents gave the most incredible feedback. Many parents had lost hope, but rediscovered it through their children.

There was one eight-year-old child who, as a result of trauma, had denied being Syrian. When he stared our sessions, he was very introverted and always had tears in eyes. His mother told us he was adamant he wasn’t Syrian and wanted nothing to do with the country. I think he didn’t want to remember what he’d been through and tried to block it out any way he could.

Bit by bit, he became more and more sociable and started making friends in the group, then eventually outside in the camp. At the reading ceremony, his mother told us, “I don’t know how, but he’s changed. He’s a lot more talkative, he’s a lot calmer.”

It was often really tough hearing all the stories of the war and journeys to Europe, especially from children. We had five children, two groups of siblings, who had all lost their fathers in the most terrible way. They were all experiencing so much grief and would often talk about their loss. I was advised by the psychologist to always be careful that one child’s story doesn’t trigger trauma for the others.

During one session, we were talking about happiness and one nine-year-old child who had lost her father said: “I don’t think I’m ever going to feel happy again.” It was heartbreaking to hear this coming from someone so young who had their entire life ahead of them. Thankfully, after a few more sessions, most of the children appeared happier. They would still talk about their fathers, but focused on positive qualities and their happy memories, instead of how they were taken from them.

It was wonderful to see the children come alive and help each other with their stories. At the beginning, they may have been withdrawn, and at the very most able to interact with their experiences only. But, by the end, they were so supportive of each other, fighting to make sure each other’s stories were included.

They had each witnessed Islamic State carry out atrocities in their own hometowns and countries. I know it’s an atrocious thing to bond over, but somehow it was healing. It helped them to share the burden of what they’ve been through. It was beautiful to see, because it didn’t matter where they were from in the end. Whether the children were from Iraq or Syria, they told each other’s stories as if they were one.

After the book-reading ceremonies, it was hard to say goodbye. Because these kids have lost so many people in their lives, you never want to create a really strong bond in case breaking it causes them more trauma. It’s a difficult skill, but that’s why we have expert psychologists to make sure we get the right balance. We have to make clear that we have our own families and homes to return to.

One thing I made sure was to give the children a proper goodbye. As I said before, not being able to say goodbye to their friends and families in their home countries was a real source of sadness for these kids. I made sure that wasn’t going to happen again.

I made sure the children knew the day was coming, and spent time with them individually. We spoke about how nice it was to be able to say goodbye to each other, and remember all of the happy memories of the time we spent together.

Myriam Abdel-Basit is an Irish cultural mediator who has spent the last seven months with Médecins Sans Frontières (MSF) in Greece. Working alongside a psychologist, she met many children in Moria camp, which houses more than 8,000 refugees (in a space meant for 3,000).