Men are often ‘the forgotten mourners’ of miscarriage

How many men and women you know are silently grieving over miscarriage? 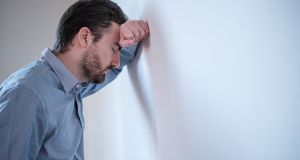 Men are more likely to do their grieving silently. Photograph: iStock

I wonder how many of the men and women you know are silently holding the grief of miscarriage as they go through their day?

A good many, as estimates suggest that 10-20 per cent of pregnancies end in miscarriage. We also know people can hold the grief for a long time.

As Kirsten Weir puts it in an article for the American Psychological Association: “Some research suggests that up to 30 per cent of pregnancy losses are followed by significant emotional reactions. And one in 10 women exhibit signs of a diagnosable disorder such as anxiety, depression or post-traumatic stress disorder following a reproductive loss.”

The woman carries the foetus inside her body, and so we can easily think of miscarriage as uniquely a women’s issue.

But men grieve too. In a striking phrase, Dr Rayna Markin of Villanova University describes men as “the forgotten mourners”.

It’s not too hard to see how this can happen. Men are more likely to do their grieving silently. Needing to appear strong for his partner, a man may suppress his expression of grief.

This can lead to issues between the man and woman, with the woman feeling that her partner cares less than she does. It’s important for both partners to be aware of this difference and to have a conversation about it. It’s better if conversations like this don’t happen in the middle of a fight but at a time when each is capable of understanding the other.

The loss may get little acknowledgement from wider society. Somehow a loss, which would be seen as life-changing a month after a child is born, is treated as something to get over if it happens, say, midway through the pregnancy.

Is this because of the absence of a funeral? Or because nobody has actually seen a baby? We simply don’t know.

Also, if a miscarriage happens early in a pregnancy we expect the parents to get over it quickly. But I think most parents would agree that they begin to feel a bond with the hopefully future child as soon as they find out about the pregnancy. An early miscarriage is a painful disruption to that bond – and the stronger the bond, the greater the pain.

At the very least, the parents have to cope with the loss of the future they thought they would have with the child, a future they have dreamt about and elaborated on.

The woman, who had always assumed she would be a mother and who as a child may have played at mothering her dolls, has a whole set of assumptions about herself ripped apart by miscarriage. This set of assumptions is sometimes called the “reproductive story”, and the strength of those assumptions also influences the depth of the grief.

We are all members of society and share many of society’s most common beliefs. These include the belief that people should be able to get over a miscarriage and get on with things. To the extent that a grieving parents shares that belief, the parents may feel guilty or ashamed at their own distress.

The thing is, society has got it wrong. Miscarriage can be devastating, and the effects can last for longer than society thinks they should.

Grief doesn’t have a formula and nobody need feel guilty if their grieving doesn’t conform to the expectations of others.

None of us should assume that we can gloss over another person’s miscarriage as though it was a matter to be got over with as little fuss as possible. We need to show emotional support.

Kirsten Weir’s article “Healing the Wounds of Pregnancy Loss” is on the website of the American Psychological Association.

The Miscarriage Association of Ireland (miscarriage.ie) has information about resources, including helplines.

Padraig O’Morain (pomorain@yahoo.com) is accredited by the Irish Association for Counselling and Psychotherapy. His latest book is Kindfulness. His daily mindfulness reminder is free by email.

Coronavirus ‘cocooning’: the community wraps a soft blanket around its most vulnerable
5