Have you heard the one about the fella in a wheelchair? 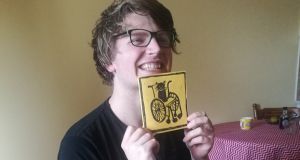 Did you know that political correctness is killing comedy? Did you hear that no one is allowed make jokes anymore, because everyone is too sensitive these days? Yep, there are no more jokes in our society, especially none that mock minorities or women. I was kind of shocked to hear the news myself. ’Cos I was under the clearly misguided impression that I’ve been hearing edgy jokes about my disability every day I’ve left the house this year.

Maybe it’s my environment, I’m studying film and television production with a lot of funny people and (also) a lot of people who make a lot of jokes. Not to mention, this is Ireland: the Canadians have politeness and conscientiousness; the English have the crushing weight of colonial history which they refuse to acknowledge; and the Irish have their sense of humour! I once read, in an Irish guidebook, that Irish friendships are measured not by how kind we are to each other but by how much mocking or “slagging” (scare-quotes theirs, not mine) we can give or receive. It feels weird to be judged so accurately, right?

But questions of environment aside for the moment, I’ve been trying to honestly examine how I feel about disability-related comedy. So I’m gonna do the one thing every good writer knows makes jokes much much funnier; I’m going to sincerely and soberly analyse them.

Usually when someone makes a first “cripple joke” (my own scare-quotes this time) around me, they stop. They ask me, either in English or in a particularly articulate dialect of body-language, whether what they just said was okay. And I, almost always, put them at ease. Often I say something to the tune of, “I prefer people being comfortable making jokes about it than people being uncomfortable and awkward”. And this is more or less the truth, depending on the type of the joke.

Because sometimes the jokes are funny. Sometimes they’re boring. And sometimes they shake me to my very core. It’s not all that cool to admit, but sometimes a joke can leave me rattled for days – thinking less of myself, thinking I deserve the second-class citizenship that comes with a disability in this country. Thinking all of my ambition is a sad little joke.

But it’s more complicated than jokes bad or jokes good. Because humour can break down barriers, it can help us discuss topics we otherwise wouldn’t. Because I really do choose people laughing irreverently over people pitying respectfully. And because people are complicated. We have desires and motivations and prejudices and groupthink affecting our actions. Because why else would I make even more ruthless jokes about myself?

In Hannah Gadsby’s Netflix comedy special Nanette, there was a line that hit me – hard. Talking about her career, built on self-deprecating humour, she asks her audience: “Do you understand what self-deprecation means? When it comes from somebody who already exists in the margins? It’s not humility, it’s humiliation.”

It made me take a long and hard look at myself and my relationship with self-deprecation. It made me wonder whether I’m doing the right thing, mocking myself for my disability or letting others do the same. Because Hannah Gadsby made one thing clear throughout the special: comedy isn’t always good, comedy doesn’t always make you more free. Sometimes, comedy enforces the status quo – making sure that LGBTQ+ people, women, people of colour, disabled people etc know their place.

And I worry about how complicit I am in all of this.

But it’s still more complicated than jokes bad or jokes good. There is a place, not just a place, a need for comedy that’s revolutionary. If you want to fight back against crushing oppression, against prejudice, against the institutional madnesses of modern life, there are worse places to start than exposing their ridiculousness.

So I guess I’m issuing a challenge. The next time you want to make a joke that pushes boundaries, that’s edgy and brave and proudly champions free speech, ask yourself who you’re targeting. Are you mocking the powerful, are you interrogating how are society is run, are you making people think? Or are you just doing the powerful people’s dirty work for them.

Paddy Holohan: ‘MMA was a liferaft to grab onto’
4