In America, you get sick, you get faxing – you don’t actually get time to recover or be sick 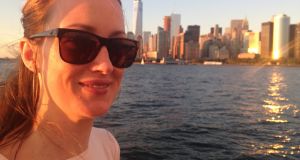 “The American health insurance system is a broken machine. It cares not for the health of a person, it cares only for the delivery of payment.”

One morning in New York, I opened a medical bill with a curious item listed on it: “Control of Complex Nose Bleed – $700”. If you have ever wondered how much it costs to have a serious nosebleed in America, that’s your answer.

Such an arbitrary number, I stared at it for a while, and wondered about what else one could get for $700 (about €600). Perhaps a trip to the Bahamas, to an all-inclusive resort with 500 water slides. Or maybe lunch for two at Per Se (without wine). You could even take five helicopter rides around Manhattan. Or, you could fly home to Ireland, get your nosebleed stopped for a fraction of that cost and probably have some cash left over for a cup of tea and a bun.

My journey to this costly nosebleed began in 2014, when I was diagnosed with “the best kind of cancer you could have”.

This is indeed a direct quote from the doctor who diagnosed me, on the spot, and then toddled off about her day. And there was I with my crazy notions that no cancer is the best kind of cancer you could have.

There isn’t enough room in this newspaper, or any other, to detail the hours that became days that became weeks and months of lengthy, frustrating phone calls to health-insurance companies and medical administrators and billing departments and doctors’ secretaries to set up a surgery date. I could have become a partially qualified dentist in the time I have spent on the phone trying to get a person to fax a document to another person.

This is how it goes in America: you get sick, you get faxing. You don’t get time to recover or be sick. Instantly, someone will be breathing down your neck to make sure they are paid. Instead of healing, you worry about your insurance company paying the bill. You are suspended in a special kind of administrative hell, where your only lifeline is an oversized, antiquated machine designed by Satan himself. It’s grotesque and inhumane.

But boy does it make some people rich.

Seventeen months ago, I was diagnosed with a second “best kind of cancer”, and the process began again. Endless phone calls and emails and time lost to the mysteries of fax machines. Why, oh why, are people still using fax machines?

After a bad experience the first time round, I went doctor-shopping and found a kind, compassionate and talented surgeon who took my health insurance. It was like winning the “best cancer” lottery. I found another surgeon who worked at the same hospital to remove the “defect” and they would both be within the same system and maybe that would mean less faxing in my life. Definitely less cancer, anyway, that’s for sure.

After two brutal days of surgery, I recovered at home. My father flew in from Ireland to take care of me and I dropped into an opioid haze of pain and recovery, hopeful I was through the worst of it.

Four months later, I needed more surgery. Earlier this year: same. I couldn’t breathe properly. The inside of my nose felt like collapsed Play-Doh. Amazing Surgeon Who Also Takes My Insurance (ASWATMI) and I were spending a lot of time together thanks to Bestest Cancer Ever™.

I got all my paperwork, health-insurance documents and faxing ducks in a row and showed up at a swanky hospital for this final surgery in an operating room that looked like spaceship. ASWATMI played Frank Sinatra as I got really high from a brief IV injection of benzodiazepine and was then cast into the darkness of anaesthesia.

I woke to noises and beeps and blood and excruciating pain. My husband was gone. He was in a pharmacy somewhere, entrenched in a fight with my insurance company to get pain medication for me. I couldn’t speak. I was alone.

The next day at home, the pain got so bad I was convinced my brain was going to explode. ASWATMI prescribed a higher dose of pain meds and when my husband arrived to pick it up, he was told I no longer had health insurance.

This was news to us.

What emerged in those days after my recent surgery was that a staggering act of incompetence had occurred. My health insurance had been cancelled, erroneously, without my consent or knowledge, by someone called Karen, who probably loves fax machines and I hope I never meet. Also, in those few days post-surgery, I started to haemorrhage. Badly. I stood over my bathroom sink, gushing blood, unable to stop the bleeding, and afraid to go to an emergency room because I no longer had health insurance.

Eventually, I had no choice. I had to go to a local hospital. I had been bleeding for more than three hours. My ER visit is a another story for another day but the bleeding stopped and I came home. The next day, it started again. This time, it was ferocious. Faced with the fear of another uninsured ER bill, I bled for hours at home until finally, I took matters into my own hands and pulled a blood clot out of my head the size of a tennis ball.

The next day, I arrived at my follow-up appointment with Amazing Surgeon Who Also Takes My Insurance looking like a human wreck, like someone who had been squeezed through a fax machine. AMSWATMI stopped the bleed. He controlled the hell out of my complex nosebleed. And that is how I know how much a nosebleed costs in this town.

In the three months since, I’ve been locked in a soul-sucking, exhausting administrative battle with health-insurance providers to have my insurance reinstated. Without health insurance, I’m in a cash economy. I’m off the grid, fighting a failing, dysfunctional system so grossly inefficient it makes the HSE look like a dreamy wonderland of social healthcare. Last month, I had to pay cash for a mammogram. My bills are stacking up and I will have to negotiate and pay them and I will never get that money back. I’ll have to file a complaint with the attorney general about what has happened. And I will have to fax. Lord, why? Why must I still have to fax?

The American health insurance system is a broken machine. It cares not for the health of a person, it cares only for the delivery of payment. People stay in jobs they hate to keep their “good” insurance. Women are forced to stay in bad work situations because they need their insurance to pay for IVF or other expensive health procedures.

A $700 nosebleed is just the tip of the iceberg. I’m one of the lucky ones. Me and my Bestest Cancer Ever™ got off lightly.

Healthcare is a basic human right.

And we must fight like hell to keep it that way.

Self-isolation fatigue and the art of survival
10