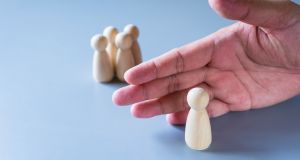 With any vaccine still in early development, the best way to mitigate the pandemic is social distancing, experts say. Photograph: iStock

As many as 25 per cent of people infected with the new coronavirus may not show symptoms, the director of the Centers for Disease Control and Prevention in America warned this week – a startlingly high number that complicates efforts to predict the pandemic’s course and strategies to mitigate its spread. “This helps explain how rapidly this virus continues to spread across the country,” said Dr Robert Redfield.

Researchers do not know precisely how many people are infected without feeling ill or if some of them are simply presymptomatic. But since the new coronavirus surfaced in December, they have spotted unsettling anecdotes of apparently healthy people who were unwitting spreaders.

“Patient Z,” for example, a 26-year-old man in Guangdong, China, was a close contact of a Wuhan traveller infected with the coronavirus in February. But he felt no signs of anything amiss, not on day seven after the contact nor on day 10 or 11.

Already by day seven, though, the virus had bloomed in his nose and throat, just as copiously as in those who did become ill. Patient Z might have felt fine, but he was infected just the same.

Researchers now say that people like Patient Z are not merely anecdotes. For example, as many as 18 per cent of people infected with the virus on the Diamond Princess cruise ship never developed symptoms, according to one analysis. A team in Hong Kong suggests that from 20 per cent to 40 per cent of transmissions in China occurred before symptoms appeared.

The high level of covert spread may help explain why the novel coronavirus is the first virus that is not an influenza virus to set off a pandemic. The new virus spreads about as easily as flu, “and when’s the last time anyone thought anything about stopping influenza transmission, short of the vaccine?” said Dr Michael Osterholm, an infectious disease expert at the University of Minnesota.

With any vaccine still in early development, the best way to mitigate the pandemic is social distancing, he and other experts said – especially as people may be passing the virus on to others even when they feel fine.

Like influenza, some experts now say, this virus appears to spread both through large droplets and droplets smaller than 5 micrometers – termed aerosols – containing the virus that infected people might release especially while coughing but also while merely exhaling. They emphasised that the level of virus in both types of particles is low, so simply jogging or walking by an infected person does not put people at risk.

“If you have a passing contact with an infectious person, you would have a very, very low chance of transmission occurring,” said Dr Benjamin Cowling, an epidemiologist at the University of Hong Kong.

The risk goes up with sustained contact – during face-to-face conversation, for example, or by sharing the same air space for a prolonged time. In addition to its confusing stance on masks, “the WHO has been saying aerosol transmission doesn’t occur, which is also perplexing,” Cowling said, adding, “I think both are actually wrong.”

Experts agreed that infections were being passed along by people who do not report symptoms – what they call asymptomatic transmissions – but they also noted some confusion around the term. “There’s no standard definition for it, and you could say to yourself, well, that’s kind of ridiculous: You either have symptoms or you don’t,” said Dr Jeffrey Shaman, an infectious diseases expert at Columbia University. But studies by his team have shown, he said, that some people never notice their symptoms, others are unable to distinguish the infection from their smoker’s cough or allergies or other conditions, and still others may feel every pain acutely.

There is also a largely semantic debate about the proportion of people who appear to be perfectly fine but then become ill – as in the report in The New England Journal of Medicine of an apparently asymptomatic spreader who later acknowledged having felt mild symptoms.

Ultimately, Shaman said, these definitions are unimportant. “The bottom line is that there are people out there shedding the virus who don’t know that they’re infected,” he said.

Where the definitions may matter is in being able to understand the true scope of the pandemic.

Cowling’s team has analysed data from China at various stages in the pandemic. The World Health Organisation’s mission to China concluded that most people who were infected with the virus had significant symptoms. But in the early weeks of the epidemic, his analysis shows, China set a high bar for what constituted a confirmed case of infection – requiring respiratory symptoms, fever and a chest X-ray for pneumonia.

Their definition left out mild and asymptomatic cases and, as a result, the team vastly underestimated the scale and nature of the outbreak there. “We’ve estimated in China that between 20 per cent and 40 per cent of transmission events occurred before symptoms appeared,” Cowling said.

A separate analysis of the hundreds of people cloistered aboard the Diamond Princess cruise ship bears out this scale. Once the ship docked in Japan on February 5th, researchers tested all of the passengers and reviewed those who tested positive for the virus on multiple occasions over a two-week period. They found that 18 per cent of the infected passengers remained symptom-free throughout.

“The substantial asymptomatic proportion for Covid-19 is quite alarming,” said Dr Gerardo Chowell, an epidemiologist at Georgia State University who worked on the analysis. Chowell noted that the passengers on the ship tended to be older and therefore more likely to develop symptoms. He estimated that about 40 per cent in the general population might be able to be infected without showing signs of it.

There have also been many hints, subtle and not, that the virus can be transmitted via aerosols. Sixty members of a choir in Seattle gathered on March 10th for a practice session for more than 2½ hours. None of them felt ill, and they made no contact with one another. But by the end of March, dozens of the members had fallen ill, and two had died.

Their experience points toward airborne transmission via aerosols, which can travel farther than the large droplets the WHO and the CDC have emphasised. The virus is still most likely to be expelled with a cough or a sneeze, as far as 8m (about 26ft), according to one study. But studies on influenza and other respiratory viruses, including other coronaviruses, have shown that people can release aerosols containing the virus simply by breathing or talking – or, presumably, by singing.

“I think increasing evidence suggests the virus is spread not just through droplets but through aerosols,” Chowell said. “It would make a lot of sense to encourage at the very least face mask use in enclosed spaces including supermarkets.”

Several studies have shown now that people infected with the new coronavirus are most contagious about one to three days before they begin to show symptoms. This presymptomatic transmission was not true of the coronaviruses that caused severe acute respiratory syndrome and Middle East respiratory syndrome. “This is where we got very lucky with SARS, was that it really didn’t transmit until after people were showing symptoms, and that made it much easier to detect it and shut it down with aggressive public health measures,” said Dr Carl Bergstrom, an expert in emerging infectious diseases at the University of Washington in Seattle.

With the new coronavirus, there is transmission by healthy-seeming people, and often severe symptoms and a high fatality rate. “That whole combination makes it very, very tough to fight using standard public health measures,” he said. – New York Times