Coronavirus: Professor calls for health workers to be prioritised amid testing delays 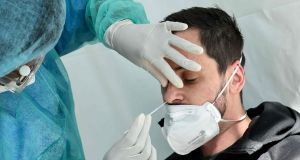 A medical staff member collects samples of a patient at a medical centre in Paris for a Covid-19 test. Photograph: AFP via Getty Images

Covid-19 testing on samples taken from patients in Ireland is to be carried out in Europe, HSE chief executive Paul Reid has said.

The decision to transfer some of the tests to a “reputable organisation in Europe” comes amid a backlog caused by a worldwide shortage in test kits.

Priority testing will continue in Ireland for priority cases such as health workers and patients in hospitals.

Additional test kits are expected to arrive in Ireland within 10 days. The reliability of Chinese test kits will need to be validated when they arrive, Mr Reid added.

The HSE is also working with Irish pharma and bio-pharma companies and third level institutions to determine their capacity to “ramp up” testing.

He said there has been a 1,000 per cent growth worldwide in the demand for the reagent used in testing.

Mr Reid said he wants to get to the stage where there are between 10,000 to 15,000 tests being carried out a day, but that will not happen in the next week, he warned. At present 2,600 tests per day are being carried out.

Using laboratories abroad to carry out testing will be significant, he said.

Mr Reid stressed that the most important thing the public can do is to adhere to the guidelines with regard to hand hygiene and to stay at home. “It is so important.”

Meanwhile, an infectious disease physician at St Vincent’s hospital has called for testing for healthcare workers to be prioritised over community testing.

Paddy Mallon, who is also professor of microbial diseases at UCD school of medicine, called for a slowing down of community testing for Covid-19 and a ramping up of testing for health care workers.

It would be more beneficial to keep more health care staff at work, he told Newstalk Breakfast.

Although “a huge amount of work” is going on into seeking out alternative options for testing, “for the moment we need to accept we cannot do it right, so for the next week or two the focus should be on health care workers.”

Prof Mallon said that if the rate of admission to intensive care continues to increase then that would not be sustainable.

“We are now on a knife edge and the only thing that is going to protect the health system is the measures we’re taking.”

He said further measures, aimed at avoiding new infections entering the country, may need to be taken if the situation deteriorates.

There are very few countries not taking measures to protect their borders, he said. “The longer we do nothing the more concerned I’d be.”

Immunologist Paul Moynagh has said that Ireland should be striving to increase testing for Covid-19 to 15,000 a day, a target he believes is achievable.

Every positive case that can be identified will help reduce the rate of transmission, he told Morning Ireland.

Prof Moynagh, who is also head of the Kathleen Lonsdale Institute for Human Health at NUI Maynooth, added that because so much of the infection and transmission comes from people who are asymptotic, it was really important to try to capture the level of infection in the community.

Ways to bypass the current bottleneck need to be examined, he said. It should also be investigated if the pharmaceutical sector can provide support, so testing can be scaled up.

1 Trump turns to bible for photo op as DC burns around him
2 Covid-19: Easing of restrictions ‘unlikely’ to be speeded-up
3 US protests continue amid curfews, arrest threats and plea from George Floyd’s brother
4 Large gatherings reported throughout State on bank holiday
5 ‘Frustrated and angry’: Thousands march in Dublin to protest death of George Floyd
Real news has value SUBSCRIBE