Running is the new religion for my age group and I am yet to see the light, but I’m going to try 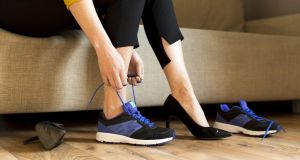 He described me as being more couch to couch than couch to 5K and even offered to ghost-write it for me.

He has cause to be smug having recently completed his third Dublin city marathon. He also has cause to be skeptical. He has an audio recording of me, taken on New Year’s Eve, 2005, in which I declared (possibly slurred) that I would be jogging in January and that he could come with me or sit on the couch and get fat. In my defence, I didn’t declare which January I would be jogging in. So for the second time in my life, and rather more publicly this time, I declare that I will be jogging in January.

You can all sit on the couch and get fat if you wish.

I wonder if this is what the Danish mean by hygge?

I have watched with trepidation as a large cohort of my friends have embraced running like a Rocky montage. At first, they were all absolutely terrible and couldn’t run for a bus. In no time at all, however, they were running up steps, punching the air, and shouting “Adrian” as they signed up for their next marathon, triathlon or ironman. Running is the new religion for my age group and I am yet to see the light.

I have always been rubbish at sports. My school had an unofficial policy of allowing students to opt out of PE if participating in typing class.

Needless to say, I am a pretty good typist.

I have one friend who is equally athletically challenged and she has never quite forgiven me for not letting her in on the secret. The first rule of typing club was that you did not talk about typing club.

So, in an effort to lose weight, to get healthier and to exorcise my exercise demons, I have signed up to the Get Running beginner’s course which claims it will take me from inactivity to being able to run 30 minutes non-stop. Tall claim indeed. To be fair, the course cannot be any worse than my husband’s own 5K initiative which involved him dumping me out of the car in my running gear exactly 5K from our house.

Day 1: Fully kitted out in Lidl middle aisle running gear I head down to my local park. Heeding the advice that the biggest mistake most novice runners make is running too fast, I take it nice and slowly. Run one minute, walk one minute and repeat 10 times. Done, and not too bad at all.

Day 2: I realise that I am going to have to run during lunch hour. I cringe at the thoughts of my colleagues seeing me in my running gear and I wonder what the female version of Mamil (Middle-Aged Man In Lycra) is? I channel my inner Irish mammy and tell myself “sure nobody’s looking at ya”. I run for two minutes, walk for two minutes and repeat five times. I surprise myself by not being out of breath. I put this down to running slower than on other occasions.

Day 3: My instructions are to run for two minutes and to walk for one minute. A little more challenging this time, but again I find it not too bad at all. I finish with a strange and unfamiliar feeling.

Claire McMahon is following a Get Running programme (irishtimes.com/getrunning) and will be writing a weekly column about how she gets on.
Part 1: You can sit on the couch and get fat
Part 2: The truth is I don’t like exercise
Part 3: Dubious and hopeful