In a town in north Co Dublin, adults with an intellectual disability and secondary school students are uniting to perform a musical show in a powerful demonstration of social inclusion 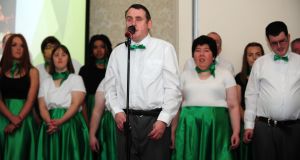 More than 30 people fill the rehearsal room – some holding song sheets, the set-list punctuated by laughter and chat.

This is where the magic happens – in the unseen prelude to any big production.

But it is no ordinary ensemble.

The group comprises 17 adults accessing a day service for people with an intellectual disability, run by Prosper Fingal in Rush, Co Dublin; and 20 transition year (TY) students from the nearby St Joseph’s Secondary School.

On April 30th next, they will perform songs from the musicals at the Millbank Theatre in Rush, guided by production director Niamh Carroll and musical director Haleigh Davidson.

The collaboration - first suggested by Caroline Cutliffe, a teacher at St Joseph's - is now in its seventh year and has produced high-quality shows. But that is not the main measure of its success. “It is inclusion at its best; you’d love to see this rolled out in every school,” says Carroll, a support worker at Prosper Fingal, which provides services and supports to about 300 adults with an intellectual disability across north Dublin.

The ‘Prosper Players’, who are among 41 people accessing the service in Rush, range in age from their 20s to 60s. Some live with family members and others in residential homes.

In the rehearsal room, students and adults sit intermingled. Some are chatting amicably and others are shy but respectful in one another’s company.

Everyone is assigned a buddy and remain as each other’s companions. Three of the Prosper Players have a visual impairment and their student buddies learn to guide them on and off stage. Together, they move energetically through a set-list that includes Breaking Free, A Million Dreams and, a particular favourite, Can You Feel the Love Tonight.

Prosper Player Stephen Dowdall’s voice soars beautifully. He wows audiences with his vocal performances and Carroll mentions he is also “a brilliant pianist”.

His musical enthusiasm is evident. “I like Mary Poppins!” Dowdall announces during a break, to which music teacher Davidson is in agreement. “We’ll have to find a song from Mary Poppins to do,” she says.

There is a role for everyone. Prosper Player John Paul McDermott says he will be a narrator. “I just love doing the reading and listening to the music,” he says.

His buddy is student Rachel Dillon, who says she has already learned much from the experience. “It has taught me not to judge a book by its cover. I mean, a lot of things can teach you that, but this is definitely one of the most important, because you come in here and everybody is the same . . . you just want to sing, dance and have some fun.”

“I like Rachel; she is a good friend of mine,” adds McDermott warmly. “I never met her before and we are best friends now.”

Prosper Player Kim Doyle is totally immersed in the practice, the lyrics known by heart. Doyle, who works at a pharmacy in nearby Lusk, is also a skilful dancer. To her right, in the front row, Prosper Player Anthony Conroy wears a permanent smile. He has had some hearing loss and watches Carroll intently, lip-reading lyrics.

Conroy describes rehearsals as “good fun” and clearly thrives in the social interaction involved. Student Seán O’Dea, one of his buddies, says “when we both see each other, it is big smiles on both of our faces”.

According to Paula Weir, manager of the service in Rush, this initiative is about “making that vital link with the youth of the community”. And as the weeks go by, barriers deconstruct. “In many ways, the students and our individuals are no different from each other – they all have to learn from scratch and they experience the finished product as a team. They seem to just gel after week three or four, and it is as if they have always known each other. It is lovely to see that process and how hard they work as a team to get to the final production.”

Kadem Price, a student in this year’s group, says “when the music is playing we all just connect with each other”.

The previous collaboration, staged during two nights in April, was based on the history of Prosper Fingal, which is celebrating its 40th anniversary.

Ciarán Reade, TY Coordinator at St Joseph’s, says these performances at the Millbank Theatre were so powerful that it was decided to bring the show to the wider school community. So the group reunited to perform at the school’s TY graduation ceremony.

“We had an audience of about 300 people there – parents, students and a wide cohort of our teachers,” says Reade. “It brought the relationship to life, everybody got to see it . . . I was trying to hold it together. I was on a high at our being able to show this off at the graduation and I can remember at the end of the third song just turning around – I was sitting in the front row – and seeing this flood of tears.”

Prosper Fingal was established in 1978 by parents and friends of local people with an intellectual disability due to the dearth of services in the area. It began as a workshop housed in chalets on the grounds of the former St Ita’s psychiatric hospital in Portane. Today, under a service arrangement contract with the HSE, it provides day, respite, residential and clinical services and supports throughout north Dublin.

The core purpose of Prosper Fingal is to support each individual “to live the life they choose, in the same way and same places as everybody else”.

During 2018, the organisation focused on building connections with local young people by establishing the annual ‘Making a Difference Awards’, which recognise students in local schools who promote social justice and inclusion. It also has ‘ambassadors’ in these schools who inform peers about its work.

According to Pat Reen, chief executive of the Prosper Group, if the younger generation can be engaged, “they will create the opportunities and the environment for people with disabilities to be more included, more understood and more valued into the future”.

Reen says there are a number of “really big benchmarks” in terms of inclusion, acceptance and participation.

One of these is employment. “If the people we support can get a paid job that is valued, that attaches to their skills and abilities – that is the highest-level outcome from my perspective. Because they are out there contributing as an equal, utilising all their talents and integrating within the mainstream community.

“Many employers in north Dublin have come on board, but we need more certainly. That is one of the biggest achievements for those who have the confidence to take on that role.”

Independent supported living is another area that requires much greater development. Increasingly, people with an intellectual disability want access to supported living rather than full-time residential care, according to Reen.

“We [as a country] have a long distance to go on this,” says Reen. “The HSE and Government are thinking about this alternative more and more, because it’s more cost-effective for the State and also because it’s more appropriate for the person themselves.”

To some extent, there is still a “charity mindset” in relation to people with disabilities, and that is why initiatives such as the musical show are so important.

“It is a production that everyone is invested in,” says Reen. “It isn’t the TYs helping and supporting the service-users of Rush, it is that they are putting on a musical production together. They all take joy from it, they all get excited about it, they all get nervous about it, and they all share in its celebration afterwards.”

Jack Hussey, a first-year DCU student who won a Making a Difference Award last May, performed in the show during his transition year. “It made me grow as a person,” he says. “To me, it was more about the ability part, not the disability part. It showed the ability they have.”

Judy McGann, a music teacher at St Joseph’s with a long involvement in the project, says this recognition is what particularly comes across in students’ written accounts of their experience.

According to Patricia Hayden, school principal, the effect on students is “profound”.

“The connection with Prosper Fingal is morally right. It’s right because it’s about respecting the rights of others and respecting that every human being is a social being as well. It so fundamentally addresses the notion of people’s human rights. I think that’s why it is so successful and appeals so much to young people.”