Toddlers favouring one parent over the other is normal, if unsettling. But at least it’s a weight off my hip . . . 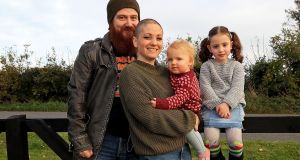 Geraldine Walsh with her husband Barry Walsh and daughters Allegra and Devin. Photograph: Donall Farmer for The Irish Times

There’s a novelty of parenting that gets old very quickly. The part when your little mini-me wants you and only you, no matter how many treats your other half bribes them with.

When our first daughter was born, her dad felt this instant draw and connection to her. They were like two peas in a pod, unless I disappeared out of sight and her safety blanket was swiftly pulled from her ever-cradling arms. She would cry blue murder if I went anywhere without her, or God forbid I left her with her dad for all of half an hour, or a solitary trip to the bathroom. His heart was broken as he gave her every spare moment, cherished his time with her and wore his knees down playing with her and laughing with her.

No matter how much fun they had, how much love he showed, she would search me out and desperately adhere herself to me when she had enough of playtime with her best friend, discarding him like last year’s toys.

It’s only natural, and perhaps instinctual, that a baby and a toddler would choose the parent or carer who appears to have a hidden layer of food, hugs and bandages for grazed knees. But toddler favouritism has its limits. Emotional limits on the needed parent and the rejected parent. We now have a second daughter who is taking that incessant need of clinging to my leg over her dad’s that little bit further than her sister. And her dad feels like he’s back to square one, attempting to connect and nurture his baby. Despite it appearing to be some level of master manipulation, young kids are not capable of using our emotions against us. But to say she has become part of my daily outfit as she blurs into my jumper, becoming a permanent fixture to my hip, would not be a lie.

It’s near impossible to get anything done when you have a shadow mere inches away, following you, grazing your leg every so often to remind you they are there. Oh, but you know they are there. The cries when you disappear into another room let you know. It can be emotionally and physically draining but that is one very real part of parenthood. We are protector, comforter and provider. Until we’re not, which can be a shock to the system when suddenly, one day, out of the blue, your shadow disappears and attaches themselves onto someone else.

Punch in the stomach

Toddler favouritism has a funny juxtaposition, as there will be a day when a switch is flicked, and you become old news. Kids change loyalties quicker than you can choose what to watch on Netflix. When our eldest daughter was 2½, one week over the summer, when we took a much-needed staycation and explored every park in the area, Daddy shot straight to the top of the family hierarchy and I flew all they way down to the mat we wipe our feet on. Slightly dramatic, but this sudden change was like a punch in the stomach as Daddy was called for everything, Daddy got the night-time cuddles and their secret language evolved quicker than her allegiances switched.

Joanna Fortune, psychotherapist and author of the new book, 15-Minute Parenting, says that developmentally this is a normal transition in toddlerhood and is often aptly referred to as the “Daddy phase”. As with most things to do with kids, it is normal, temporary and if our hearts are breaking at the thoughts of our mini-me needing us that little bit less, we have to remember it is not personal.

Fortune reminds us that this behaviour “typically occurs around 18-24 months old and this is because up until this point young children have been very physically and emotionally dependent upon their primary carers (typically, though not exclusively, mothers) and when they achieve what a stronger sense of self and other awareness, ie that they and their mothers are in fact separate beings, they become very interested in their other parent.

“This is entirely normal and even a healthy development in toddler and pre-school years. The frontal cortex part of their brain is not yet fully developed, and they can only really focus intensely on one relationship at a time. So, it was Mum but now that they know they are a separate person as opposed to a part of her, that intense focus transfers onto their other parent.”

Fortune advises to accept this as one of many challenging phases that will happen in your child’s development. Even though it may be difficult for you, she says, “try not to act dejected or to force your child to turn to you as this can serve to make the situation worse.

“Invite them to come to you, say how you would love to play or cuddle with them or do their bath or bedtime today but if the answer is a vehement ‘No’, then accept this and say ‘Okay, maybe tomorrow then’. Try to look upon this phase in a positive way and take the time for yourself. It is transient and won’t last forever. The preferred parent can help by empowering the other parent by redirecting the child to them to do some tasks and talking them up.”

Our eldest daughter has remained a daddy’s girl. They are best friends. At five years old, she most often will choose her dad over me and while this took a long time to get used to, I love watching their relationship. We are back to square one with our youngest daughter. I wonder when she reaches the peak age of recognising this change in relationships, will she switch and choose her dad over me. I expect it to happen at some stage. I’m also prepared for it.

This time, I won’t take it personally and I’ll relish the weight being lifted from my hip. Until then, despite it being emotionally draining at times, I’ll take the cuddles because one day, I may get less.

But there will always be a hug for me, from both of our girls.