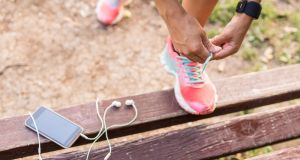 “This week I am equipped with my brand new GPS running watch. The phrase sledgehammer to crack a nut comes to mind.” Photograph: iStock

As I start into the third week of my Get Running challenge, I realise that there is definitely one thing I like about running.

The “running card” is a trump card in my house and a very valuable resource. When training for a running event, sticking to a training schedule is sacrosanct and cannot be criticised, questioned, changed or interfered with. Running outranks all other cards of plain non-trump status. The running card is typically played as an ambush manoeuvre and/or at pivotal moments when divvying out childcare responsibilities.

I am reminded of my mother who after years of being dealt the golf card decided, if you can’t beat them, join them and took up golf herself

As a seasoned marathon runner, my other half has had the running card for years. Participating in this challenge however, the tables have turned. Time to put the kids to bed? Bam! Running card. The dishwasher needs to be emptied? Kapow! Running card. Like Gollum, he wants it back.

Always he is looking for it. He wants it. He needs it. Very soon, he will ask us for it, we will see. And the running card is always wanting to go back to him, but we mustn’t let him have it. He is very tricksy. My running card.

I am reminded of my mother who after years of being dealt the golf card decided, if you can’t beat them, join them and took up golf herself. She loves golf now so maybe there is hope for me yet. Not with golf though.

This week I am equipped with my brand new GPS running watch. The phrase sledgehammer to crack a nut comes to mind. I have read about runners who meticulously plan their routes in advance so that they can sketch out interesting (mostly rude) shapes on the map using their GPS watch. A cyclist in the UK recently drew out a 41-mile shaped Santa Claus on the streets of Birmingham. Given my running ability and the limited running distances available, Santa Claus is a tall ask, as in fact are most rude shapes. I vow to aim for this when my running distances improve. It is important to set goals.

A five-minute slow run followed by a two-minute walk, repeated three times. The run is challenging but I complete it, something I genuinely feel I couldn’t have done two weeks ago.

A six-minute slow run followed by a two-minute walk, repeated three times. I begin to panic that the running distances are becoming unrealistic for my abilities at this point. The runs are beginning to increment sharply and I fear I may be exposed as a running fraud shortly.

An eight-minute slow run followed by a three-minute walk, repeated two times. I completely misread the instructions for this run. Instead of running twice I run three times instead, at eight minutes a pop. Instead of stopping for three minutes, I stop for two. I listen to a podcast about Brexit to distract me and it is true: misery does in fact like company. I find it pretty tough but also complete the run without keeling over. When I finish, my face resembles a Ribena berry and stays that way for hours. On the upside, I don’t have to turn the heating on for hours when I return home, bonus.

I am simultaneously dubious and hopeful about completing this challenge, a running version of Schrödinger’s cat if you will. My last run of the week occurs 10 years to the day since stopping smoking.

I remind myself that bad habits can indeed be changed and that I indeed can change.

Claire McMahon is following a Get Running programme (irishtimes.com/getrunning) and will be writing a weekly column about how she gets on.
Part 1: You can sit on the couch and get fat
Part 2: The truth is I don’t like exercise
Part 3: Dubious and hopeful