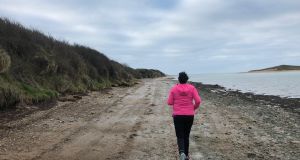 When an opportunity came up for me to take part in The Irish Times’ Get Running series I knew it was the motivation I needed to give running a try.

The Get Running beginner’s course has been designed to get just about anyone from the couch to running 5km, or for 30 minutes, in eight weeks.

I secretly fear that I may fall outside the “just about anyone” category.

As I face this challenge I am part terrified, part excited and part terrified again. I don’t expect to have an epiphany along the way or to suddenly see the light. I expect to embrace running in the same way that John Sergeant embraced Strictly Come Dancing. My objective in undertaking this challenge is merely to see if I can. If I could lose some weight along the way that would be a big bonus. If I could lose enough weight that I don’t have to let the zip on my skirt down after Christmas dinner and I don’t then have to remember to zip it back up before standing up again that would be the absolute cherry on the top.

The training programme informs me that breathing and accountability are the keys to keeping me on track this week. I have never been particularly good at breathing during exercise. I forget to do it and then gasp, before forgetting to do it again. By going at a pace which is more comfortable I am generally finding it easier to control my breathing.

I don’t have a great track record on being accountable either. I once glued a potato to a spoon on a sports day and shamelessly won the race.

The other advice this week is to ignore the voices in my head that say I am not a runner. Okay then, I won’t listen to those voices at least.

My seven-year-old daughter comes along with me to keep me company. We admire the many Christmas lights still up as we run and mainly talk about Santa. She struggles on the last iteration and falls a bit behind. On our cool-down walk I remind her that we only ran for a total of 12 minutes and that Daddy runs for more than four hours when he competes in a marathon. She informs me that Daddy is insane.

My daughter arrives in her tracksuit ready to go. I remind her that she found it hard last time around and that this run will be a little bit harder than the last one. She has thought about it and has decided she will cycle as I run, which means she is chattier than usual. The extra minute running renders me much less chatty.

I struggled with this run. My legs and back were sore and generally whinged throughout. I did complete the run but didn’t feel I completed it comfortably. In the past I would have reminded myself at this point that I simply don’t have the aptitude for sports and given up. This, however, is the new me, and the new me repeated the same run a couple of days later with no problems. If only I hadn’t listened to the voices in my head before this.

Claire McMahon is following a Get Running programme (irishtimes.com/getrunning) and will be writing a weekly column about how she gets on.
Part 1: You can sit on the couch and get fat
Part 2: The truth is I don’t like exercise