Weight loss became easier when I stopped trying to be perfect

Rachel Flaherty: It never worked, but I was attached to all-or-nothing dieting 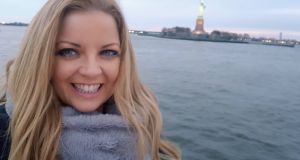 Rachel Flaherty: ‘Rewards for reaching goals are now embracing new experiences I would have previously shied away from’

One of my main problems that strongly contributed to my almost 5½st (34kg) weight gain was striving for perfectionism. For years I set unrealistic goals and when I deviated, even slightly, from the detailed restrictive diet and exercise plan, I equated it with failure and gave up.

But after losing more than 3½st (22kg) and keeping it off, I now realise I don’t need to follow any plan perfectly to lose weight, just keeping going will make the difference.

Yes, it takes commitment, determination and hard work (although not as much as I thought), but it is worth it to feel healthier and better. I’ve learned making mistakes and having setbacks along the way has helped me figure out what works for me and what doesn’t. I also discovered I don’t need to feel deprived and miserable for weight loss, and giving myself time to learn new habits has given me lasting results.

The key change for me has been moving my mindset from the “all or nothing” approach that consumed my time and life temporarily to realising doing better than what I did yesterday, or last week, is an achievement.

When I use the term perfectionist, it is in relation how I used to tackle my unhealthy eating and exercising behaviours. I wanted to carry out whatever new shiny attractive plan that had caught my eye with 100 per cent commitment and “perfection”. I wanted to make up for the guilt and shame I felt from overeating or binge eating and not exercising. It always resulted in initial success but ultimately a feeling of failure. Eventually I gained more weight.

Logically I know perfectionism doesn’t exist, it is a myth, but I used it as an excuse and a way to procrastinate. I measured myself harshly against unrealistically high standards I’d expected to achieve.

When I ate differently from the meal plan, binged or missed a workout, and I would tell myself that if I couldn’t do the programme perfectly, I wasn’t doing it at all. I’d ignore any progress I’d made and abandoned it all until the “next fresh-start Monday”.

In the meantime, while I plotted my return to my next new “perfect” plan, I thought I might as well have a few “last suppers”, eat everything I wouldn’t be allowed eat on whatever new clean-eating diet I would chose (regardless of whether I liked it or not), and not do any exercise (even though I enjoyed it) to save myself for the future extreme fitness I would attempt.

I would be feeling like hell by the time that Monday arrived, but the thrill of imagining how “perfectly” I would commit to this programme was exciting. I had become regimental in my thinking of food as “good or bad”. Even though it never worked, I was oddly attached to “all or nothing” approach.

Everyone has their own baseline on where to start to improve health but I often picked plans too ambitious for the amount of time I could commit and my cooking skills. There was one time I committed to following a plan that cooked all meals from scratch with a huge array of ingredients and involved quite a bit of time. “It’ll be all worth it with great results,” I told a friend as they couldn’t stand straight from giggling, remembering the struggle I’d had with boiling eggs. (I would forget about them until there was a loud bang from the kitchen, as they exploded – but I have improved since then, I use timers.) That particular “ideal” plan, which possibly did work for many people, also included 90 minutes of exercise, six days a week. I barely lasted the week.

Eventually I realised I was trapped in a cycle of restrictive dieting and overeating, and decided focusing on my mindset, making small goals and using different measurements (including step goals, introducing and replacing different foods, body measurements) would be the best way to monitor and recognise my progress. Journaling helped me to step back and look objectively at unhealthy patterns of behaviour I could change. I’d also realised my workouts didn’t need to be “perfect”, even a walk for half an hour or any movement has always made me feel better. I’ve not yet regretted any workout or exercise I’ve pushed myself to do.

My weight loss has not been linear, and motivation comes and goes, but not putting pressure on myself to be “perfect” on the different changes I’m introducing into my lifestyle has made it easier to keep going. Recognising the small goals, I’ve reached along the way has built up my confidence and belief in my body and fitness again. I feel stronger, fitter and healthier than I have in years, regardless of what the weighing scales says. My standard of success has changed from “doing something perfectly” to doing it better than what I used to when I had an unhappy relationship with my body and food. Food is part of my daily life to keep me energised and nourished, and for social and family occasions, and I’m learning more all the time. But I no longer look to food as a reward or something to be ashamed of.

Rewards for reaching goals are now embracing new experiences I would have previously shied away from and I’m looking forward to many more.

Part 1: I lost 3st and I'm stronger now
Part 2: Stuck in the weight loss plateau
Part 3: Friend called my fitness holiday a fat camp
Part 4: My plan is driving me up the walls
Part 5: It is slow and fluctuates but has stayed off
Part 6: Why are we doing this? This is terrifying
Part 7: I want to form new habits
Part 8: I gained 4lb. My fear of failure returned
Part 9: It’s time to face my nemesis – running
Part 10: Losing weight without trying
Part 11: Letting go of the shame and guilt helped
Part 12: Habits have led to weight loss
Part 13: I’ve fallen in love with running
Part 14: The mountain doesn’t care who you are
Part 15: Unhappy relationship with food and my body
Part 16: I stopped trying to be perfect