I’ve fallen in love with running. How did that happen?

Rachel Flaherty: It feels alien to yearn for an exercise I’ve thought of as a form of torture for so long 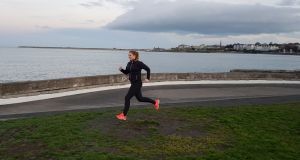 I made many mistakes when I tried to take up running in the past and given up. “I don’t have the body built for running,” was a favourite on the extensive list of excuses I told myself. I admired and envied people I saw out running, but I liked to think they had something special that I didn’t. Who can judge my inaction when it is the fault of my genetics? Deep down I knew, for me, all my excuses were rubbish.

Back in late November, I finally forced myself to start running and once again I’ve given up. But this time it is different. This time, to my own surprise, I’m actually missing running. It feels alien to yearn for an exercise I’ve thought of as a form of torture for so long.

I’ve viewed running as my arch-enemy for so many years that even as I’ve slowly built up my kilometres over the last few weeks, I wouldn’t admit to myself there were parts I was starting to enjoy and it wasn’t all a struggle. Running was the exercise that publicly humiliated me, the part of fitness class I dreaded as I didn’t want to be last again, and the exercise that had often made my heart feel like it was about to jump out of my chest – I had grown to hate it. Running a 5km race seemed an elusive goal to me.

I haven’t given up by choice this time. It is an injury, which is not related to running or any exercise, that has caused me to stop. But until the injury I didn’t realise how my attitude towards running has changed. I’m even missing that miserable first kilometre, when I doubt if I will be able to keep going for any distance, to getting past that to feeling excitement as the run continues and sense of achievement at passing the small little goals I set myself along the way.

About two years ago, when I was 5st 6lb (32kg) overweight, the heaviest I had ever been, I decided to go running. My approach then was very much all or nothing – strict dieting, overeating, going all out with exercising and then doing nothing for weeks. After just a couple of minutes into the run I was out of breath, everything hurt, my body felt uncomfortable and weak. I stopped. I quickly walked home feeling embarrassed and defeated. Looking back it was my mind that failed me rather than my body.

When I eventually did try again I was more than 3½ stone (23kg) lighter, but my mindset was my biggest obstacle to overcome. I had convinced myself I wasn’t able to run. Going for the first run was the hardest part and I was terrible, but it was a relief to get it done. Over the weeks I had begrudgingly dragged myself out the door for each small run telling myself if I didn’t do this now, I would never do it as there was no “perfect weight” or “time” so it had to be now. The fear of regretting not trying had finally usurped my fear of failure. I relaxed a little more each time I ran but didn’t think I enjoyed it.

The turning point was St Stephen’s Day. I hadn’t run in about two weeks. I was feeling very lazy, groggy, still full from the previous day of eating and comfortable lying on the couch. My runs earlier in the month felt like a distant memory. I decided to challenge myself that if I could complete a run of 2km feeling this unmotivated, then I knew my mindset was strong enough to it anytime. Runners on and music ready – I rushed out before I could overthink it and change my mind.

Instantly, running felt harder than it did before Christmas. I was sweating straight away, my legs felt heavy and my breathing was laboured. I was taking big deep breaths when all of a sudden – gulp – I had swallowed a fly. I was hit with that horrible realisation it was late to do anything about it. People passing looked at me concerned as I had face of horror, disgust and bewilderment.

What should I do? Everytime I thought about the fly wriggling away down my throat I wanted to retch. Surely this was a valid excuse but turning back wouldn’t save the fly and I would feel defeated again. I had to keep going. The little hills felt tougher than before but I was proud when I got to 3.5km. It’s a distance that is small to many but for me, it was progress as I would’ve normally come up with an excuse not to do it.

I felt good and had gained confidence in what I would do next. Getting an injury a couple of weeks later is a setback, but I’m looking forward to getting back running regardless if I’ve to start building my runs from the beginning again.

The next challenge is to let go of being self-conscious about running in front of people and take part in a 5km charity run, and maybe even a 10km.

1. Don’t give up. Challenge yourself to do even 30 seconds more than you did in the previous run.

2. Don’t talk yourself out of going for a run before you start. Any effort at all is better than none.

3. Compile a music playlist that motivates you.

4. Set your own small achievable goals.

5. Track your runs so you can measure progress.