Rachel Flaherty: I was incredibly anxious on my first fitness holiday. Would I hold others back? 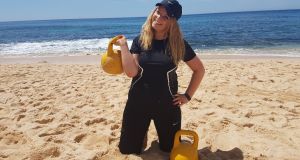 Some of the workouts took place on the beach.

It was time for me to step out of my comfort zone and what better way to start than to sign up for a week of exercising multiple times a day, outdoors in the heat, overseas with complete strangers. What do I have to worry about?

I’d lost three stone but remained two stone overweight. My weight stayed the same for four long months. My time of sitting comfortably on my weight plateau and patting myself on the back for not regaining the weight I’d lost needed to end.

So I booked a fitness and health holiday in Portugal for seven days. After I’d told a friend of my “brave” plan, she leaned her head to one side and grimaced sympathetically while asking “Is that one of those fat camp things?”

I gasped and grimaced back answering, “No.” But I then remembered when I first heard of a fitness holiday I’d imagined commander-style trainers shouting at me through a megaphone saying “pain is weakness leaving the body” as I crawled through mud – I was wrong, it is nothing like that.

Late last year I had gone on my first fitness holiday when I was a lot heavier. I was incredibly anxious worrying if it would be a waste of time for me or would I hold back the elite athletes in the group. Neither happened. When the week was finished I had achieved far more than I originally thought I would by working on my own strengths and weaknesses, and I had a renewed sense of focus.

Many people ask me why I would want to spend my holidays putting myself through a “torturous week of exercise”. I want to do it because nothing feels better to me than being afraid to do something, forcing myself to do it and then actually enjoying it –and it’s not torturous. I’ve also realised I really enjoy working out with other people. So, in full disclosure, this is a baby step out of my comfort zone as I’m returning with the same company, Algarve Fitness, but with different trainers and schedule.

I fly to Faro Airport on the Friday evening and meet the rest of the group for a welcome dinner. I get a little carried away with the holiday vibe and have a couple of glasses of wine. It probably wasn’t my brightest idea with getting up at 7am for breakfast the next day but the excitement of the week ahead had me awake on time.

I meet the main trainer for the week for a private consultation, which involved being weighed, getting measurements done and discussing goals for the week and the future.

In our group of six, fitness levels and ages are varied. Some people want to gain muscle, increase their strength, others are recovering from an injury and are building their fitness back up, and some want to lose weight. I want to lose weight too, but I also want to use the week to change from my normal routine to start healthier habits, to push myself further than I currently do in exercise and get motivated for future goals. I know my body won’t radically change in one week, but my mindset and motivation can be improved.

Owner Ray Donovan, who is from Dublin, is also the cook for the week. He explains the food for the week will not be “anything fancy” but wholesome and nutritious. Examples of breakfast during the week are eggs, porridge or fruit. Lunch and dinner include chicken, fish, beef or pork with salad, vegetables or a mix of beans. Snacks were provided too.

This part of the holiday appeals to me as I hate cooking, so showing up and just eating what is served makes me happy. In a world of popular cooking shows and foodies, I feel it’s almost a sin to admit I hate cooking, and I know it’s something I need to change my mindset in order to get healthier.

About 11.30am on the Saturday we have our first session. It was about 23 degrees with a breeze, and I’m feeling self-conscious and nervous. I showcase my lack of co-ordination and my ability to get a bright red face in minutes. We all laughed as much as we sweated and exercised; it was a good start.

During the week exercise sessions vary from high-intensity interval training (HIIT), circuits, boxing and weight training. Additional running is optional and there are plenty of challenging hills around the resort to test yourself. I didn’t do this; becoming a runner is on my future to-do list. None of the training or activities are mandatory during the week but besides the extra running, I took part in everything else.

An example of a day was a HIIT session at 7.30am, breakfast about 8am-ish, a coastal walk at 9.30am, lunch about 12.30am, relaxation time until 4pm and then a class like circuits, boxing or upper body training with some stretching afterwards. The day ended with dinner at 6.30pm/7pm. The days varied according to how people were feeling and different activities like kayaking and surfing were included but generally, that was the routine.

A physio session was included in the week, which was welcomed by everyone.

There were also swimming pools, a jacuzzi and sauna in the resort to use when relaxing. The apartments each had an en suite spa bath, which I was grateful for as the days wore on.

There’s a gym in the resort for any extra workouts people wanted to do.

Some of my favourite parts of the week were boxing training and the two hikes. The first hike we walked was about 18km through the countryside in an area called Paderne through Purgatorio (it was better than it sounds). The second was a scenic 10km coastal and cliff walk from Portimao to Alvor. There were shorter walking options available.

I had some soreness and aches by the end of day two, but after a bath felt much better. On day three I could have happily stayed in bed for the day. I woke up feeling a bit flat, but we started with yoga and it was a day of less strenuous activities, so I soon forgot about my lethargy. That night I slept more than nine hours and woke up the next day full of energy again.

The last workout of the week on the Thursday was on a beautiful picturesque beach with soft sand,but that same sand soon became my torturer. The workout involved rope slams in the sand, which I found tough as the sand almost acted like a glue trying to hold onto the rope each time, kettle bells, squats, lunges and sprints. It was hard but a lot of fun.

We ended the week with going out for dinner and drinks in the local town of Carvoeiro. The group of people I met were the highlight of my week; they were encouraging, fun, friendly and great to work out alongside.

The week showed me that although I had a lot of work to do in building up my fitness and strength, I had made progress in recent weeks. During the week I lost five pounds and 1½ inches (4cm) from my waist. It felt good to move pass the dreaded weight plateau, but it felt even better having a renewed sense of determination and self-belief again.