Steven Murphy on the lure of pulling on his running shoes 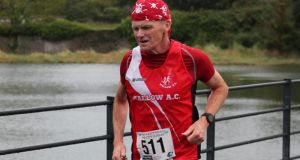 Steven Murphy: Why I love... Running

It’s true to say that I have been a fitness fanatic since my teenage years.

I played soccer, was a lifeguard, cycled, played tennis, and in later years developed a taste for my local gym. None of these, however, gave me such a sense of fulfilment as when I pulled on a pair of running shoes and hit the road.

At the time, the idea was to do just the one 26.2 miler, and I had no intention of ever doing another. But of course once I did one I had to go back and try for a better time, and as the years have passed I have run Dublin (7 times), Cork (5), Dingle (2), Ballyhoura Mountain, Connemara, Amsterdam, and Rotterdam. Addicted is the only word to describe it!

I reached 60 years of age in 2017, and a dodgy knee has restricted my training to twice a week, a tempo or mountain run of 10 miles or so on a Thursday, and typically a 20 miler on a Sunday. I try not to miss certain ones such as the Cork to Cobh (15 miles), my favourite race.

What do I get from running?

Fitness, obviously, but also so much more. The stresses of life melt away, and on the day when you’re skipping along at a quick pace, you feel such a wave of pleasure and contentment. Running has given me a healthy body and, dare I say it, mind.

I know that at this stage I’m closer to the end of my running career than to the beginning, and when the day comes that I have to stop I’ll be devastated, but at the same time I’ll be able to say that I have had a long and happy innings. It owes me nothing, as the saying goes.

In conversation with Jo Linehan