Are serious cyclists putting their bone health at risk? 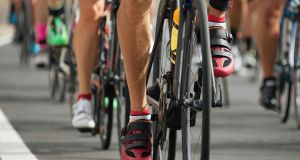 Study’s findings suggest that serious cyclists might want to consider at least sometimes branching out in their fitness routine.

Could competitive cyclists be putting their bone health at risk?

A disquieting new study of bone density in elite cyclists and runners suggests the answer might be yes. The study found that the cyclists, both male and female, had thinner bones than the runners, even though all of the athletes were young, healthy and enviably fit, and many of the cyclists lifted weights.

The results underscore the divergent effects of various sports on our skeletons and also stir a little unease about the long-term impacts of pursuing low-impact exercise at the expense of more high-impact activities.

By and large, the available scientific evidence shows that physical activity is desirable and even necessary for bone health. Children who run, hop and play develop thicker, stronger bones than those who remain sedentary, as do teenagers and young adults who participate in sports involving sprinting and leaping.

Most scientists agree that these kinds of activities build skeletal strength by generating sudden, sharp forces that minutely bow or deform the affected bones. Such activities jump-start processes within the body that increase the number of bone cells and help to prepare those parts of the skeleton to withstand similar forces in the future.

Even middle-aged and older people, who once were thought to face inevitable thinning of their bones with age, can maintain strong skeletons if they are sufficiently active, recent studies show.

But which types of exercise bend bones in a desirable way – and which are too gentle – remains uncertain. Some past studies suggest that running generates enough force to remodel bone, while other experiments with runners conclude the opposite. Ditto with weight training. And multiple studies have raised concerns about negligible or even adverse effects from non-weight-bearing exercises, such as cycling and swimming, which put little pressure on bones.

In hopes of gaining more clarity about sports and bones, researchers at the Norwegian School of Sport Sciences and the Norwegian Olympic Training Centre, in Oslo, decided to look closely at the skeletons of world-class, competitive cyclists and runners.

They focused on elite, full-time athletes in large part because the athletes’ heavy training could be expected to amplify any impacts from and differences between the two sports.

They wound up recruiting 21 high-level runners and 19 road cyclists, men and women, most of them in their 20s and all of them lean, fit and with several years of intense competition behind them.

The athletes reported to a lab, where scientists measured their body composition, with particular focus on the density of their bones, both overall and in their lower spines and the tops of their femurs – portions of the skeleton that can indicate general bone health.

The researchers also asked the athletes about their training, health and calcium intake and whether they spent much time in the gym. The latter question was of particular interest to the researchers, since weight training often is recommended to athletes in sports like cycling to bulk up their bones, as well as their muscles.

The scientists then compared data. Some of the differences between athletes were substantial, if expected. The cyclists trained far more than the runners, for instance, averaging about 900 hours a year in the saddle, versus about 500 annual hours on the road or treadmills for the runners.

The cyclists also did more weight training, with most of them heading to the gym during their offseason for intense lifting. None of the runners did that.

The athletes in both sports consumed enough calcium to meet their expected daily requirements.

But they had noticeably different bones.

The cyclists, as a group, all had thinner bones than the runners, and more than half of them met medical criteria for low bone mineral density in some portion of their skeleton. One of the riders, a man, displayed clinical osteoporosis in his spine.

These results are potentially worrisome, says Oddbjorn Klomsten Andersen, a graduate student at the Norwegian School of Sport Sciences and a former national-team cyclist himself, who led the study, which was published in BMJ Open Sport & Exercise Medicine. “There are limited studies following young cyclists through their careers,” he says. “But studies in master cyclists demonstrate that a larger proportion of them have low bone mineral density or osteoporosis” than people who do not cycle.

This study cannot tell us, though, why cyclists’ bones might be thin, he adds. They could have been eating too little or sweating too much for ideal bone health. Both low calorie intake and high rates of calcium loss through sweating have been tied to bone loss in other studies.

More surprising, the cyclists’ heavyweight training seems not to have built much bone.

But, as Andersen points out, this was a one-time snapshot of the athletes’ health. It is possible, he says, that weight training prevented even greater bone thinning. It is also encouraging, he says, that the runners harboured relatively healthy bones, since some past studies have hinted that running might not stimulate bone building.