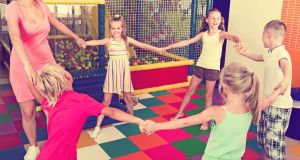 Simon Says, Swing Your Partner, Meet in the Middle and Follow the Leader are always good fun and plenty of movement can be orchestrated

There was a time when children spent most of their lives on the go. These days however, their childhood years are much more sedentary, with many spending hours sitting watching TV or playing computer games.

And as current figures from the HSE reveal that one in five Irish children is overweight, the battle against childhood obesity becomes even more crucial.

Many youngsters are reluctant to leave the comfort of their livingroom and, even during school hours, teachers often opt to keep children indoors during break times as it is deemed too wet or too cold for them to venture outside.

But just because they have to remain in the house or classroom, this doesn’t mean that they can’t move around. Sheila O’Sullivan, PE teacher and fitness professional, says it is vital for children to be active every day.

“It is important for children to get at least one hour of exercise a day as recommended by the World Health Organisation, ” she says. “This can include cardio exercises of both moderate and vigorous intensity, muscle endurance and flexibility exercises. Parents should act as role models for their children and get active with them. They should also encourage them to be friendly with other active children and introduce them to a wide variety of after-school activities.

“And teachers should show enthusiasm and excitement about PE and Action for Life (AFL) and encourage everyone to participate – and although nothing beats getting outside and I would encourage adults to get children to bundle up and avail of outdoors for light and fresh air as well as for activities, indoor exercises can be done if it isn’t possible to get out.”

Helen McMahon has three children who are now in their teens. She has always encouraged them to exercise and says when they were small she played indoor active games with them during very bad weather. As they got older, she arranged competitions which involved moving around the house.

“I have always loved getting the kids out into the fresh air for at least an hour a day, whatever the weather,” she says. “But there have been days when it was just too miserable to venture outdoors so when my guys were small I would set up games in the house where we would do things like Jumping Jacks and hopping or even dancing to their favourite songs.

“Then when we got a Wii, we would do the sports games such as jogging on the spot, boxing and even step aerobics. It was always a good laugh and because we were competing against each other, everyone wanted to have a go and we were all well exercised at the end of it. I’m not a sports fanatic but I hate seeing kids cooped up all day long and if they have to be inside, then I will always find a way to get them moving.”

Sports Psychologist, Canice Kennedy agrees and says it is vital for children to exercise on a daily basis, no matter what the weather is like outside, as being unfit will inhibit them in later life.

“Children should be learning physical literacy in school and by this I mean running, jumping, falling, getting up, catching balls and the rest,” he says. “This form of literacy is just as important as academic development because without it, children will not be fit enough to take up sport later in life and are taking the first steps towards adult sedentary behaviour.

“So taking exercise needs to become a daily activity in school – regardless of the weather or the availability of a sports hall. Teachers could do regular exercise in the classroom – simple things such as stretching and touching their toes, moving or stomping their feet and bending knees. And this could be for five minutes at least twice per day.”

“Saying that ‘it is too cold’ is not an acceptable excuse for avoiding sport or exercise,” he says. “Parents should be encouraging their children to get out of the house during the winter months by taking them for a walk or cycle, limiting their time on the internet or computer games and bringing them to outdoor sports events. Older children can also be sent to the shop (if within a safe distance) to get groceries.

“Taking exercise should be part of family life and it needs to be driven by the parents, with the children taking part rather than parents ‘motivating’ them to take exercise.”

And if the weather is really too bad to venture outdoors, Dublin-based Sheila O’Sullivan, who is also a consultant with the Irish Heart Foundation and an ex-Ireland Basketball player, has a number of ideas for parents and teachers to get kids moving indoors.

– Functional movement is good, this can include competitions on how quickly children can tidy the room, pick up toys, clear desks or rooms at home.
– Upstairs/downstairs activities are great exercise so encourage children to go up and down as many times as possible.
– Make the exercises fun and part of daily homework.
– Walking to the shops needn’t be a chore – use the time to tell stories and incorporate movement to illustrate the storyline.
– Engage in activities with rhymes which include movement while reciting the word – such as “we’re going on a bear hunt” while marching.
– Simon Says, Swing Your Partner, Meet in the Middle and Follow the Leader are always good fun and plenty of movement can be orchestrated.
– Activities such as Fruit and Veg game and Alphabet game involves getting children to move to each word – such as “Kicking Kiwi”, Leaping Lemon, Running Rhubarb – or B for Bouncing Ball, D for Dancing – the list is endless.

HPV vaccine: A complete guide to immunising daughters and sons
7