Dry January: easy for some, but for others it can be a long month 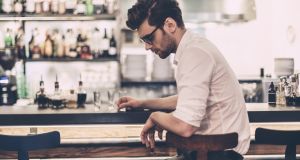 Euphoric recall can make a dark, smelly pub feel like, oh, Trump Tower until you’re sitting there with a glass in your hand and realising you’re actually in a dark, smelly pub which you had promised not to set foot in until February. Photograph: iStock

Dry January is, for some people, a breeze – but for others it’s no laughing matter and getting through 31 booze-free days may already feel like a challenge.

If you’re in that second group, you’ll find it easier to get through to the end if you remember two key points.

One is to know about craving and how it works, and the second is to figure out what you’re going to do while you’re not drinking.

One night a few years ago when I was walking through Rialto during an experimental year off the drink, I looked up in the sky and saw a sign.

The sign said “Beer” in cold, blue neon. On that chilly, dark night it looked like the most beautiful word in the world. It was attached to an off-licence on a corner of the street and it could have been a sign proclaiming the entrance to Paradise. I kept walking but with an ache of longing.

That incident illustrates a couple of important points about craving – and by craving I mean a persistent longing for something that you have acquired a weakness for.

First, craving doesn’t stop happening just because you want it to stop happening. Craving happens in a primitive part of the brain that is involved in learning. The problem is that it seems to operate independently of your thinking system and of your pleasure system.

The brain is a spoilsport and if you get a lot of pleasure out of a substance it uses various chemical tricks to reduce the amount of pleasure you get. This is known as tolerance and it’s a lousy human design flaw. Unfortunately, the craving system in the brain is undeterred by that reduction in pleasure and keeps you wanting your poison as much as ever.

The craving system also keeps the longing (in the form of a chemical called dopamine) going even if you know intellectually that you don’t want to drink this month. So even while you remind yourself that you don’t want to drink Wolfie will tell you that you do. Wolfie, I should explain, is what the craving system is called by Belle Robertson in her down-to-earth and sometimes expletive-laced “Tired of thinking about drinking” blog which you could do a lot worse than read.

The point I’m making here is not to be surprised if you continue to want a drink on and off throughout the month. Wanting it doesn’t mean you’re a failure. The good news is that Wolfie usually slinks away after 10 to 20 minutes if you let him – by which I mean if you transfer your attention to something other than the joys of drinking.

Mention of the joys of drinking brings me to the other aspect of craving and that’s what’s called euphoric recall. Remember the cold blue sign that said “Beer” in the night sky? Remember how I said it looked like the entrance to Paradise? That’s euphoric recall. If I’d walked in there and had a beer it would not take me to Paradise at all – I would just have been sad and disappointed with myself.

Euphoric recall can make a dark, smelly pub feel like, oh, Trump Tower until you’re sitting there with a glass in your hand and realising you’re actually in a dark, smelly pub which you had promised not to set foot in until February.

I mentioned also that you need to know what you’re going to do while not drinking. I can’t figure this out for you but I’m pretty sure sitting and looking gloomily at the radiator probably isn’t going to pull you through. Maybe it’s reading, or walking or watching good stuff on Netflix but whatever it is, it will help transfer the feeling of pleasure from the drink to the alternative activity.

If you’ve fallen off the wagon already there’s nothing to stop you climbing back on to it.

But this time remember the tricks played by Wolfie and you’ll have a better chance of getting to the winning post.