The secret to being a successful shopper

A product may have an Irish-looking flag, it may be from an Irish-sounding brand, but it is Irish only if it states that it is 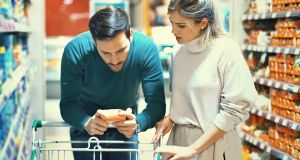 Ignore any nice pictures, flags or products on shelves nearby. The front will have marketing speak. The back has the detail

There is a secret to being a successful food shopper. The first step is to recognise that you are a very desirable creature. You arrive in the supermarket with the specific plan to buy. You are not there to browse, try something out and then disappear. You are there to spend.

All the manufacturers have to do is persuade you to spend as much as possible with them. And their best hope of doing this is with enticing food labels. So put on your cynic’s hat before you leave the house and prepare to be wooed.

Food producers try to give us what we want, says registered dietician Sarah Keogh, who has studied food regulation and worked with producers. “Irish people like salt, for example, so you will find quite high levels in ready meals here,” she says. They also know we want to buy Irish food.

Research conducted by Amárach for Love Irish Food, a business association formed to promote Irish goods, shows that 87 per cent of grocery shoppers actively try to buy Irish. Identifying what is Irish, however, is not always easy.

So here’s a tip. If the product is Irish, that fact will usually be trumpeted on the front of the packet. If it says, “Packed in Ireland”, it’s probably not Irish, but has been placed into its packaging here. Country of origin is often highlighted in a tiny circular symbol on the back; IE indicates Ireland. A lasagna from Carroll’s of Tullamore was made in Belgium, which is shown as BE.

A product may have an Irish-looking flag, it may be from an Irish-sounding brand, but it is Irish only if it states that it is.

This is done by using fake Irish brand names, Irish-looking flags or placing the products next to Irish food.

So turn the packet over to get the full picture.

Keogh, who has conducted research into how Irish consumers use labels, says she was surprised how few understood correctly the information given. “People don’t have time, so they look for one thing, such as sugar or fat content,” she says. They buy products marked “low-fat” not realising that the ingredients or nutrition list may show it is very high in sugar.

Keogh looks at the list of ingredients first. They are listed in descending order as they were by weight in production. Only key ingredients must show the percentage. So the ingredients list for Tesco’s 400g lasagna reads: tomato puree, water, UK and Irish beef (15 per cent), as well as 20 other ingredients with no percentage listed. That’s because beef is a key ingredient, while puree is not, though there is more than 15 per cent in the packet.

In the past, ingredients that formed less than 2 per cent of a product did not have to be listed. That is not the case any more. You won’t often see E numbers listed now either as manufacturers found that consumers were spooked by them and so put in the full names. So you will see turmeric, rather than E100 and carrageenan rather than E407. This is why ingredient lists have got longer. They are also often filled out by sugar in its various forms. While “sugar” is often listed early, if not first, in ingredients in its other forms it can be listed under its other names. So, for example, anything ending in -ose is usually sugar, such as fructose, maltose, galactose. Then there are maltodextrin, turbinado, ethyl maltitol, diastatic malt. All sugar.

When there are a lot of ingredients, it can be a good idea to look at so-called “nutrition values”, which list fat, carbohydrates (including sugar), protein, fibre and salt. These must be listed per 100g of the product, making it easier to estimate what percentage is sugar or fat.

You will see that a bar of Green and Black’s 70 per cent dark chocolate, for example, is almost 30 per cent sugar.

A jar of Nutella is more than half sugar. There is no need to be obsessed with sugar, says Keogh, but it is good to be aware.

Director of the Irish Institute of Nutrition and Health Richard Burton, who has been teaching students to read labels for more than 15 years, says today’s students have a better understanding of what they read. The most powerful tool industry uses is distraction, he says. “These days ‘no added sugar’ is virtually code for ‘contains added sweeteners’,” he says.

At the same time, however, big food manufacturers are spending vast sums to work out how to get us to buy more. “The industry is obsessed with what consumers are doing and it recognises that people are reading labels,” says Burton. “Some are keen to cut the long lists and dodgy ingredients. This shows we do have power. This is proof positive our influence has a big effect in driving change.”

So if the label doesn’t seem to make sense or perhaps you just cannot find the name of the country of origin, you can take action. The Food Safety Authority of Ireland advises contacting the manufacturer first with concerns and then its office. In 2016 its helpline received 221 complaints regarding labelling, an increase of 15 per cent. Labels have changed a lot in recent years but there is still room for improvement.

Next week we will take a closer look at bread.

How to approach a label

1 Turn over the product. Ignore any nice pictures, flags or products on shelves nearby. The front will have marketing speak. The back has the detail.

2 Look for the ingredient list. This can be hard to find and in small type. Ingredients are listed in descending order of weight when the product was produced.

3 Check out the percentage of the key ingredient. One Tesco lasagna has 15 per cent beef, another has 23 per cent. Guess which one is cheaper?

4 Don’t fear the ingredients listed in bold, such as celery or wheat. This is done to help those who are affected by any of the 14 common allergens the EU insists must be identified.