Could simply smiling while you run increase your performance? 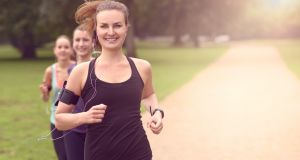 Grin and bear it: A study, recently reported in the journal ‘Psychology of Sport and Exercise’, found that compared with frowning, smiling during running improved running economy by 2.8 per cent. Photograph: Getty

In many long-distance races, elite athletes often appear relaxed, with some – remember the legendary Ethiopian Haile Gebrselassie? – even smiling. By contrast, further down the field, the painful effort of running is often reflected on competitors’ faces.

In 1905, Canadian physician R Tait McKenzie described “the facial expression of violent effort, breathlessness and fatigue” in the Journal of Anatomy and Physiology where he described athletes nearing the end of races: “This respiratory madness, this distress of mind and body, is always pictured on the face of the struggling man.”

Now, more than a century later and in the first study of its kind, researchers at the Ulster University School of Psychology have shown that, whereas smiling may decrease one’s perception of effort during endurance exercise, frowning may increase effort perception. Although previous research confirms the benefits of relaxation training on running economy, no study had so far compared the effects of facial expression on running economy or running performance.

This groundbreaking research was led by Dr Noel Brick, who tells The Irish Times: “We recruited 24 trained, club-standard endurance runners – 13 male, 11 female – and the aim of the study was to compare the effects of smiling; frowning [the facial expression people make during effortful running]; consciously trying to relax the hands and upper body; and participants’ normal thoughts during six-minute running blocks at a ‘vigorous’ pace. Our main outcome measure was running economy – the energy needed to run at a given pace – but we also measured how hard or strenuous participants perceived each block of running , how ‘good’ or ‘bad’ they felt and how activated they felt.”

Periodic smiling during training or racing may be an effective way to relax, and to reduce sensations of effort during a run

“We believe the main reason for this result,” Brick says, “is that smiling helped participants to relax and reduce muscular tension without them consciously trying to relax. We know that runners, or cyclists, move economically when relaxed, so this seems the most likely mechanism.”

A second key finding of Dr Brick’s team was that frowning also increased how hard or strenuous running felt compared with smiling and relaxing conditions. “This,” says Brick, “is most likely due to participants’ thoughts in each condition. Focusing on pleasant thoughts [smiling] or on conscious attempts to relax may distract from effort-related cues during running, thus reducing our perception of effort in comparison with frowning.”

So what are the practical implications of this work for runners? “In terms of the smiling results,” Brick explains, “periodic smiling during training or racing may be an effective way to relax, and to reduce sensations of effort during a run. I think periodic smiling is best – maybe for 30 seconds, once or twice every mile – as longer periods of smiling may be difficult to maintain.

“Having said that,” he continues, “if someone is happy to smile for a full training run or a race, it’s even better. Thinking of pleasant thoughts, or simply making the facial expression can also work – but it needs to be a ‘real’ smile. In the smiling literature, a real smile [reflecting happiness, etc] is called a Duchenne smile.”

Other strategies, suggests Brick, that may be worth trying include smiling when you say hello to people as you run past, when you see a cameraman during a race, or when you complete each mile. “Having a running partner who makes you smile,” he adds, “ is also a great advantage.”

The role of focusing on pleasant thoughts or memories while training or racing can also be helpful. For example, the researchers collected their data around December 2016 and, during the smiling condition, Brick says, “one participant revealed that thinking of their young grandchild opening presents on Christmas morning prompted a smile.”

These techniques can also be usefully applied by serious club-level and elite athletes. “It is worth noting,” Brick points out, “that the current ‘best’ marathon runner in the world, the Kenyan Eliud Kipchoge – who won the 2016 Rio Olympics marathon in 2:08:44 – deliberately uses smiling during the latter stages of a marathon as a conscious attempt to relax. For example, he did it during an attempt to break the two-hour marathon barrier at Monza, Italy, in May 2017, and also during the latter stages of the Berlin Marathon in September 2017, which he won in 2:03:32.”

Further research directions for the future, says the Ulster University team, include determining the effectiveness of smiling in real-world conditions and studies with elite-level athletes.

Meanwhile, it appears that when the going gets tough it helps to grin – or even smile – and bear it.