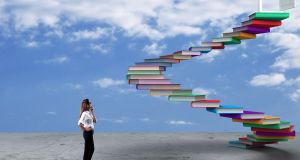 “Self-help books are an industry, and the author is earning a livelihood. They are selling a hot topic, and often an extreme of something.”

Many years ago, after a break-up, a well-meaning friend gave me a book about embracing single life and finding empowerment within.

I’ll admit to never reading the book in full, but can recall an opening line that went something like this: “We come into this world alone and we die alone.”

Upbeat it was not.

Advice on how to be a better version of ourselves, whether we want it or not, is impossible to avoid. We’re bombarded with fitness tips, career advice, questionable nutritional guidance and so-called life hacks from books, blogs and beyond.

Want a cosy night in front of the fire? Well there’s a right way to do it, according to the books that spout about hygge, the Danish concept of cosy living.

Feel your home needs a spruce up? There’s a book for that too. It’s not enough to just grab the black sacks and start clearing out your cupboards. Instead, seek out and keep the items that “spark joy”, writes Japanese author and tidying up guru Marie Kondo.

Constant prompts to strive for perfection in all aspects of our lives can be overwhelming, but hard to avoid, says Dr Aidan McKiernan, a clinical psychologist whose consultancy works with individuals and teams throughout Ireland to help them to develop character strengths.

“We all have a sense of things being in flux, of things being uneasy and we try to grab answers to steady ourselves, be that advice on diet, career, relationships,” McKiernan says. “There are a number of industries out there that claim to offer those answers. But there isn’t a right way to live your life.”

To be happier in a world of noise, he says people could try to focus less on “what they should be doing” and more on their existing strengths. “Be comfortable with who you are rather than trying to emulate someone else’s lifestyle or diet,” he says.

Sarah Doyle, a life coach and co-founder of coaching business The Better Life Project, agrees that people turn to self-help books in search of answers. “Most of us know what we need to change but we think a book will give us a key,” Doyle says. “There’s an idea called contingent self-esteem, so we say we will feel good – if, but, when. We feel good if we are constantly improving.”

But constant improvement can lead to so-called “personal development fatigue”, she explains, and there’s a lot of repetition to wade through too. “If you look at the self-help shelf, the books could be reduced to one or two key messages. Same wine, different bottle. It is an industry, and the author is earning a livelihood. They are selling a hot topic, and often an extreme of something.”

Doyle, who is planning to publish a journal to help empower women, believes some self-help books can be useful. However, she says that anyone wanting to make changes in their life has to eventually “stop reading and take action”.

Some self-help literature might claim to offer quick fixes, but the sort of life changes that tend to make us happier usually take longer, Doyle says. “Change has to be gradual. Baby steps. One thing at a time,” she says.

Being overwhelmed by promises of a quick route to a better you is one thing, but, some of the lifestyle advice available can be more harmful than helpful.

Aveen Bannon, a consultant dietician and the founder of the Dublin Nutrition Centre, has come across a few cases of people swayed by the questionable advice offered by so-called clean eating gurus, both online and in books.

“One in particular that struck me was a cancer patient who was afraid to eat root vegetables as they had too much sugar,” she recalls. “She was very underweight and was already avoiding wheat, meat and dairy based on advice she had taken from a blogger.”

According to running coach Mary Jennings, books that promote a “no pain, no gain” approach to fitness can sometimes lead to injuries. “Certainly discomfort is part of the world of exercise and to progress we do need to challenge ourselves, but we also need to listen to our body,” she says.

As a dietitian, Bannon believes there’s no such thing as “good or bad food, only a good or bad diet”. While she’s concerned by some of the dietary advice that’s out there, she believes that there’s some sense to be had behind the waffle.

“Encouraging more nuts, seeds, avocado and plant sources of protein are definite positives,” she says. “If these messages can get out along with a balanced approach to nutrition it would be idea.”

The main problem with books that promise a new, improved, fitter, happier you is often a lack of evidence. “I’m a skeptic by nature, and while it’s fine for someone to say ‘this worked for me and I believe in it’, they can’t make further claims without evidence,” McKiernan says.

“People can be vulnerable to taking these messages as truth when there isn’t actually any evidence supporting the claims.”