Should you get up early or sleep in during winter holidays?

We need midwinter sleep, but we also need exercise and a little daylight 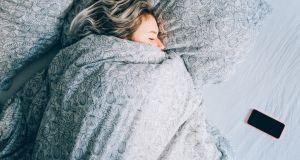 Prescription: a bit of a sleep in, a morning walk, and a short nap in the late afternoon if you need it.

Children, students and lots of lucky grown-ups tend have a decent block of time off this week. After the big day is done, during that limbo before the real world starts to churn again properly, there’s the prospect of quality time with family and friends, reading, maybe a look at the sales, some exercise outside, or inside playing with your new Christmas toys.

It can also be a time to sleep. There’s nothing quite like the Christmas holiday sleep-in, snoozing under the duvet, catching up on hours, maybe months, of sleep deprivation at the darkest time of year. But as it is dark, with short bursts of daylight, we should also make the most of the short day and get outside while it’s light.

Which to prioritise: hibernating in bed, or snatching the few daylight hours of morning outside, preferably doing something active? Are these two aims incompatible?

Sleeping-in isn’t sloth. There’s plenty of evidence that early-morning starts don’t suit everyone. Many who start work early lose far too much sleep, while later starts can improve output, efficiency and quality of life.

During busy times we accumulate a “sleep debt” – the difference between the amount of sleep you should get and how much you actually sleep. Many of us have a notion that we can “catch up” on sleep at the weekend or on holidays.

Sleep deprivation is a serious health risk. Matthew Walker of the Centre for Human Sleep Science at University of California says we we face a massive health catastrophe, on a similar scale to smoking, lack of exercise or obesity. In Why We Sleep: The New Science Of Sleep And Dreams, he argues that not getting enough sleep every night will eventually take years off our lives.

“After just one night of only four or five hours’ sleep, your natural killer cells – the ones that attack the cancer cells that appear in your body every day – drop by 70 per cent.”

Lack of sleep has also been linked to Alzheimer’s disease, cardiovascular disease, weight gain, stroke and cancers of the breast, prostate and bowel.

Banking sleep is a good thing, but in reality we rarely catch up with as much as we have lost over time; we seldom get to pay off our full sleep debt.

Research shows sleep actually can be made-up later, but how it’s done, and when, is important. Sleep debt has to be paid off bit by bit rather than in large deposits.

Sleeping in at the weekend doesn’t necessarily help. Research at New York University School of Medicine, shows weekend sleep-ins may throw off your natural sleep rhythm, making it difficult to fall asleep earlier, which exacerbates the problem. Also, years of burning the candle at both ends in your youth is history and cannot be made up.

Only sleep in the short-term can be made up later.

Frequent napping can also help with sleep debt. Some sleep experts suggest taking a scheduled nap – at the same time and of the same length – every day is more effective than trying to make up for lost sleep in one day. A 25-minute nap lets the body slow down enough to rest, without becoming dream-sleep or REM, which makes us groggy. Bodies like routine, so scheduled naps keep us more alert, apparently.

Catching up on short-term sleep debt is possible within a few days, according to Dr W Christopher Winter, of Charlottesville Neurology and Sleep Medicine. After a bad night’s sleep, going to bed early the following night will likely make up for lost sleep. But you can’t make up for sleep lost over a long period of time; trying to catch up deficits from years ago now isn’t going to repair any damage done.

Similarly, “you can catch up on lost sleep, but making up for it depends on just how sleep-deprived you are,” says Dr Michael Grosso, at Northwell Health’s Huntington Hospital, on New York’s Long Island.

Sleeping in on weekends and over holiday breaks can reverse some effects of sleep deprivation, but it needs an hour-for-hour payback. “If you lose an hour of sleep for each of five days during the week, you are literally five hours behind by the weekend, so sleeping an extra hour on Saturday and Sunday won’t make that up. You’d need to sleep an extra five hours,” says Grosso.

If you’ve been sleep-deprived for months, the loss would be far more than you could make up over the Christmas break.

Advice from a range of sleep experts suggest ways to get more and better sleep in catch-up mode over a break, as well as improve your sleep habits long-term.

- Don’t set an alarm clock on weekends and on holidays, but allow your body to wake up naturally.

- No caffeine after 2pm.

- Follow your body’s message and go to bed when you’re tired.

- Don’t go to sleep terribly late for fear of dislodging your body’s natural sleep/wake cycle (phase-shifting). It can be difficult to reverse. Don’t work on a laptop or watch TV in bed.

- Avoid screens late in the evening, and especially for the last hour before bed. Reading is a better way to wind down.

- Don’t work on your laptop or watch TV in bed.

- Exercise, but not too close to bedtime.

The other factor to consider is circadian rhythms – our internal body-clocks .

Climatic changes and day-length influence us in winter. “In the past once the sun came up it was time to get up and go out and work,” says Coogan, “and once the sun went down we retreated home.”

Hibernation has a lot going for it. “The best strategy for energy preservation was to sleep as much as possible.”

During the short winter days it’s even more important to soak up what little light is available outside. Disrupted circadian rhythms may also cause seasonal affective disorder, a depression associated with winter, and linked to the inability of some people’s body clock to adjust to time changes and the shorter daylight hours.

Soak up some bright light outside when you first wake up, says Russell Rosenberg of the Atlanta School of Sleep Medicine and chairman of the National Sleep Foundation in the US – even better if involves some outdoor exercise. “That will help reset your clock, your circadian rhythms,” he says.

In reviewing some varied advice, it appears the seeming conflict between sleeping in and getting outside early is not really valid.

You can catch up on lost sleep, to an extent. Daylight is essential for improved sleep as it helps calibrate your circadian clock so you sleep better.

In winter getting what little sunshine we have is crucial. And exercise also helps you sleep.

Prescription: a bit of a sleep in, a morning walk, and a short nap in the late afternoon if you need it.

Childcare: ‘So, you go out and take the child kicking and screaming from the car?’
Real news has value SUBSCRIBE