Let’s stop the stigma – HIV and the war on Aids 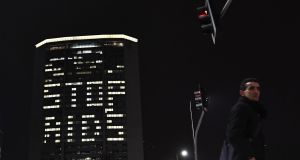 Some windows of the Pirelli tower in Milan, Italy, are lighted to write the words ‘Stop Aids’, to commemorate the World Day of the Fight against Aids on December 1st. Photograph: Marco Bertorello /AFP/Getty Images

It’s nearly 40 years since the world was shaken by the outbreak of a “plague” that started in the gay community in America and quickly became the most deadly and feared diseases across the globe.

Today it is a manageable condition that, with treatment, means those with it can have a normal life expectancy.

Sadly though, it can still carry a stigma.

In 1981 the first reports of a new viral infection, Human Immunodeficiency virus (HIV), was making headlines. The was a virus that weakened the immune system and caused Acquired Immundeficiency Syndrome (Aids), a syndrome of unusual infections and tumours that led to a slow and painful death.

At that time, it not only killed most of those infected, but it carried a sense of shame that would isolate and marginalise those whose bodies were being decimated by this aggressive and deadly virus. It is probably hard for people today to understand the extent of the fear and terror associated with Aids throughout the 1980s and 1990s, which was similar to the spread of the deadly Ebola virus more recently.

By 1992, Aids was the commonest cause of death in 25-44-year-olds in the US. Society judged those infected as deserving of it leaving them feeling ashamed, alone and unable to tell family and friends of their plight because of fear of reprisal or concern that their families would in turn be victims.

Aids would claim the lives of many celebrities; Rock Hudson, Liberace, Arthur Ashe, Freddy Mercury and our own Vincent Hanley to name but a few. Their deaths would trigger more open discussions about the infection and put pressure on governments to commit significant funds to carry out research; research to look for a test, a treatment and a cure.

Powerful advocacy groups came together, led by Elizabeth Taylor, Elton John and so many others, who relentlessly championed the rights of those living with HIV and kept it in the spotlight. They also supported and cared for their dying friends – they showed bravery in standing up to and challenging a world that didn’t want to know. They were the thorn in the side of a society who constantly needed reminding that it was all of our problem.

The late Princess Diana’s public handshake with an Aids patient in London was a pivotal moment – she showed there was nothing to fear from touching someone with the disease which helped to break down fears held not only by the wider public, but also among some healthcare professionals.

This activism kept the pressure on policy-makers to provide guidance on prevention of transmission of HIV infection, fund treatment for the care of patients and to promote scientific research into our understanding of the virus.

I had the privilege of caring for people in the US in those awful early days and later in Ireland. At the beginning we cared for them as best we could while we waited and hoped for a breakthrough.

The first hope came in 1994 when a study showed that treating HIV pregnant women with antiviral medication reduced the risk of infection to their babies. This led to the introduction of HIV testing in pregnant women that prevented the transmission of infection in unborn children born to HIV-infected mothers.

Shortly afterwards medical research showed that treatment of HIV infection with medications that attacked the virus in different ways was effective at preventing replication of the virus. In 1997, a large study reported that those who took this treatment were living longer and avoiding the complications of Aids. Finally a good news story for those infected who heretofore had a death sentence hanging over them.

Today HIV/Aids is treatable thanks to the enormous efforts of medical researchers and the patient advocates who supported them. While there is not a cure yet, over the past decade treatment has been made easier for those who are privileged enough to have access to it – thankfully this is the case in Ireland. HIV infected people take a tablet or two each day which controls the infection and prevents Aids from happening and they can have a normal life expectancy with this lifelong treatment. Indeed, Ireland’s pharmaceutical industry manufactures most of the medications used in the treatment of HIV globally.

It has been a challenging and fascinating experience as an Infectious Diseases doctor to care for patients from an era of doom to one of hope; it re-enforced to healthcare professional the need to show respect to all patients in all circumstances and to advocate on patients’ behalf when they have no voice.

The medical advances achieved over the last few decades gives me hope that even the worse diseases, through investment and people power, can be treated in a humane way to reduce suffering and allow people to live their lives. HIV can happen to anyone.

Feelings of shame, fear and stigma can often still persist for those who are now living with this virus.

I hope that this too will change.

– Professor Mary Horgan is President of the Royal College of Physicians of Ireland and a Consultant in Infectious Diseases at Cork University Hospital.